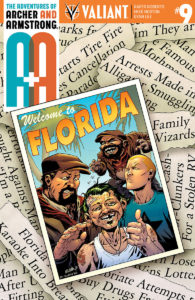 At long last, Valiant’s gallant adventurers have finally located Armstrong’s long-missing wife…in that dreaded land that dare not speak its name: Florida! But after centuries of thinking that his near-immortal bride, Andromeda, was just a booze-induced hallucination, how will Armstrong make up for years of lies, losses, and infidelities? And, as if that wasn’t enough, a nefarious new force is about to release an army of bathsalt-using “Florida Men” to finish off Archer & Armstrong once and for all!

It’s a true story (not really) ripped from today’s headlines (pretty much)! Pack your Crocs and don’t skimp on the lotion because the Sunshine State is about to hit Archer & Armstrong like a bad seafood buffet…and we only have Harvey Award-nominated writer Rafer Roberts (HARBINGER RENEGADES) and acclaimed artist Mike Norton (Revival) to blame!
———-

A new story arc in the ongoing adventures of Valiant’s very own odd couple starts with Archer and Armstrong looking to downshift the strange a bit. After their last bit of mayhem with a circus that was only a front for an organization determined to use the DNA of Aram Anni-Padda… aka: Armstrong… to replicate immortality, the 6000 year old hedonist is looking to make amends with his first wife, Andromeda. Meanwhile, Mary Maria and her Sisters of Perpetual Darkness (ninja nuns) want to turn the tables on their enemies.

Arriving at the Florida home of Andromeda, who like Armstrong is an immortal former god-figure, the lads find a surprise. Immortality doesn’t necessarily come with eternal youth. Andromeda is still alive and going strong, but the years have left their mark… They also haven’t dimmed her dedication to the uni-dimensional Creator Beings, the god-like figures responsible for seeding every planet in every dimensional plane with life. Every planet that is, except for Earth.

See, even before recorded time, we were difficult and determined to do things our own way…

The wrinkle is that even in Florida, Archer and Armstrong can’t get away from the bizarre events that seem to follow them. The shadowy cabal dedicated to pilfering the secrets to immortality has yet another installation in Florida. They’ve branched out of the circus business, and are putting all of their efforts into weaponizing Armstrong’s genetic material, combining it with earthly chemicals to create an army of drug addicted zombies. Their plan is to send their army against Armstrong, and to drag him down under their numbers.

So of course… Florida.

As for Mary Maria and her ninja-nuns on the run, they’re putting plans into motion to regain their status as apex predators in the global assassination game. Targeting the largest bank in Belgium, the financial core of the enemies hunting them, the Sisters have a bank job in mind. Trained since birth to conduct covert operations all over the world, the girls are guaranteed to make short work of a plain old bank and its security systems.

Archer & Armstrong has been a favorite of mine among the many quality titles Valiant has to offer. The combination of action and mayhem, with humor and quirks aplenty, hits all of the right notes. They get me. So it is with assurance that I urge you to give this title a look. If you haven’t already gotten yourself familiar with Archer, master of all arts martial, and Armstrong, the immortal hedonist who predates the actual concept of hedonism, this new story arc is a good starting point. Then, if you think you need to know more, you’ve got all the time in the world to back track and fill in the backstories on these always entertaining characters. 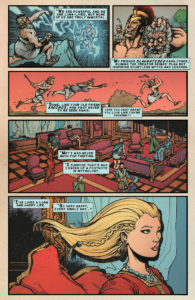 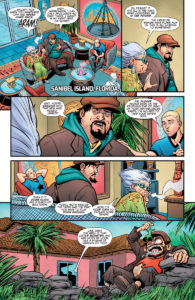 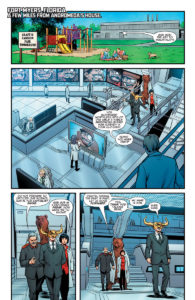 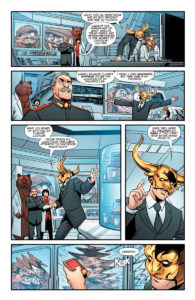 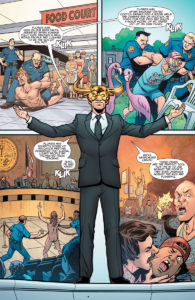