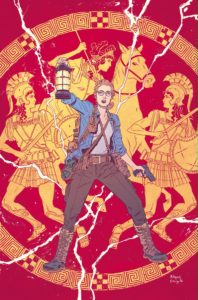 This week’s Wonder Woman was a re-introduction of the woman behind the Cheetah, Dr. Barbara Ann Minerva. The first several several issues of Wonder Woman’s Rebirth run have been involved with a short review of Wonder Woman’s origin and a current mission where the Cheetah is helping Wonder Woman find her Amazon family in return for Diana helping to free her from the curse of carrying the Cheetah spirit. Now we get to find out who Dr. Minerva really is.

Barbara Ann Minerva lost her mother at an early age, which seems to be a hallmark of both heroes and villains. Her father, a distant man, encouraged her study of languages while being dismayed with her love of myths and fables. He harshly informs her that she needs to grow up. Cut to the Ukraine several years later, and now Archaeologist Dr. Minerva is trying to find proof of Amazons existence at a dig, but is foiled as a rock slide takes out the pertinent information. She manages to get a picture of a star chart and continues the search, only to be foiled again. As the old woman in Tunisia tells her “I know what you seek. You, too, go the wrong way.”

Greg Rucka has been revealing his Wonder Woman story in that slow burn, rich way that he tells tales. This interlude is not different. You are given the character of Dr. Minerva – her strong interest in myths, her wealthy family background, her affinity for languages, and her almost blind tenacity in trying to prove herself right. This character study gives depth to a character that has often been portrayed as a two-dimensional “I have no control over the beast within” trope. As he does so well, she is humanized and given a purpose beyond revenge against Wonder Woman.

Bilquis Evely’s art is beautiful, and she draws people as people who do things. The one somewhat gratuitous shot showed Victor with a shirt off, but only so the readers could see the tree tattoo on his chest. She’s that artist you’ve seen before – on DC’s Bombshells, doing variant covers for different projects, but this does really highlight just how well she works with all kinds of figures.

New story arc in the next issue of Wonder Woman, but enjoy this breather until it starts. 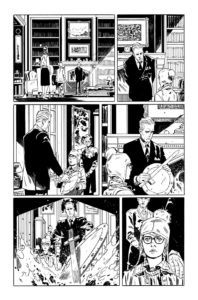 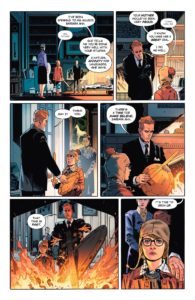