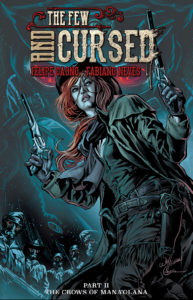 It is Buffy meets the Old West. A tale of survival set in a world without water and populated with monsters, curses and old legends.

The Few and Cursed is a comic book series written by Felipe Cagno with art by Fabiano Neves, Deyvison Manes and Ivan Nunes. It invites readers to go on the adventures of a Curse Chaser without a name simply known as the Redhead. In a world where over 90% of the water just vanished one day mankind had to adapt to survive. It’s been seventy years already and progress has halted leaving the world stuck in the Old West. The few that survived and now make a living in desert wastelands also have to deal with curses and monsters that keep crawling from hell itself. The Redhead wanders from town to town putting an end to these curses in exchange for water, now the currency of this new world. The first arc titled The Crows of Mana’Olana pits the Redhead against a bedtime story of giant Crows that kidnap children if they don’t behave.

The project has been picked up by distribution in Florida and comic conventions by Think Alike Productions and has exciting news ahead after making its debut at New York Comic Con with an exclusive variant cover.

To learn more about the The Few and Cursed please visit the link https://www.kickstarter.com/projects/174083906/the-few-and-cursed-2.

The nameless redhead stalks her prey across the dusty Pacific, through desert landscapes, skirting sand-filled wastes where water used to flow. With a layover in the town of Mountain View, “Home of the last well in a 100 mile radius”, Red finds some work as a Curse Chaser. Mountain View is plagued by Tsilkali, a giant snake demon with a hunger for young women, and has been forced to provide sacrifices to satisfy that hunger or face destruction. Red aims to bring the rein of terror to an end in exchange for two gallons of water and a bottle of the town’s finest bourbon. The water will allow her to continue her hunt for the Crows of Mana’olana, and the bourbon… I guess all I can really say is that a good bourbon is its own reward. When tracking demons and monsters, with the intent of delivering them to whatever Perdition they have coming, you take whatever pleasures life offers whenever you can.

Stories that twist the traditional genres are always a welcome break from the norm. Done well, the reach across the spectrums of fiction to catch a broader audience, appealing to varied tastes and leanings. Look at the success of stories like (playing my trump card early here) Star Wars. Deeply rooted in both science fiction and fantasy (come on, magical space wizards here), it also touches on elements of the classic Western. Take another look at the Cantina Scene, probably one of the most widely recognizable pieces of movie history, and tell me that this isn’t something right out of Tombstone… minus the bizarre cross-section of an intergalactic population. And the iconic character of Han Solo? Before the controversially retconned version of the movie, he’s the penultimate definition of the Western gunslinger, right down the blaster slung low on the hip and the devil-may-care attitude.

With The Few and Cursed, Felipe Cagno and Fabiano Neves have come up with something pretty damn cool. Not satisfied with blending two genres, Western and dark fantasy, they’ve taken a few extra steps. Within these pages are elements of horror, as Red tracks the cursed and demonically possessed across a barren landscape. And that barren landscape, complete with grounded steamer ships left in a desert that used to be the Pacific Ocean, has no trouble earning the title post-apocalyptic. In fact, I’m pretty sure Mad Max himself would happily keep to his post-nuclear wasteland and rampaging mutant biker gangs, rather than tangle with endless sand and snake demons the size of Winnebagos.

The writing is pretty sharp, with dialects hitting all the notes of the Western genre. There are some hitches here and there, but honestly that’s all editorial. Besides, in my mind I just wrote it all off as dialects within the narrative. The artwork by Neves works well with the story, giving us glimpses into the world that was as it relates to the barren reality that is. The aforementioned ship, dried out and rotting in the relentless sun, gives some perspective in both the amount of time spanned and the degree to which the world has changed. What the art doesn’t do, and Neves is to be congratulated on this, is resort to sending the heroine out into the oh-so dangerous world wearing nothing but a bikini… The tone of the book is adult-oriented, but that has nothing at all to do with the wardrobe.

As an independent comic, The Few and Cursed deserves some attention. Its Spaghetti Western tone plays well with the horror elements, and should appeal to a good number of readers. Books like this, and their creators, depend on word of mouth (and keyboard) to get some momentum. If you do take a look at this one, and it tickles your fancy in any way at all, spread the word if for no other reason than that they’ve done something a little different. 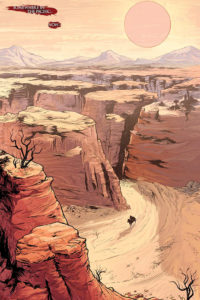 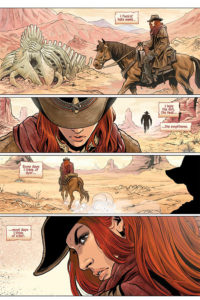 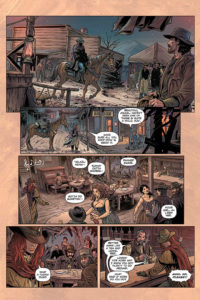 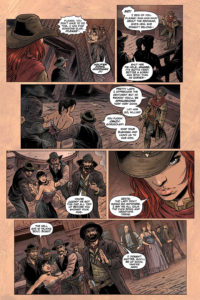