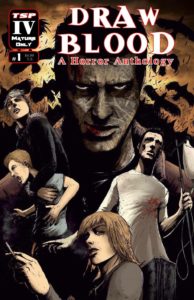 The toughest part of getting any new comic book project going is… huh, I guess it would be getting a new comic book project going. Now, after a successfully funded Kickstarter campaign, Hannu Kesola (writer on five of the six stories in this anthology) is working on getting the word out. I got a preview copy of Draw Blood, and after settling in to read it I was shocked in the best of ways.

Horror comics have got to be a pretty tough sell. If you’re watching a horror movie, it’s the pace that determines the scares. In the best examples of the genre, tension builds up toward the Big Reveal, after which it’s usually a lot of running and screaming. As a viewer, you don’t have much control over the pace unless you’re sitting at home hitting pause. On the other hand, if you’re reading a horror book, the scares all depend on the mind’s eye. The reader is given a description of what’s going on in the pages, and the tension is based more on what they’re able to come up with on their own. Give a reader too much to work with, and an author can actually take away from the reading experience.

In horror comics, there’s a pretty fine line between showing too much and not showing nearly enough. Compound this by putting out an anthology, where you’ve only got a few pages to accomplish your goal, and this balancing act becomes something akin to trying to ice skate uphill. Consequently, scary comic books done well are actually few and far between, and anthologies even more so. I will apologize to everyone involved in the creation of Draw Blood, Hannu Kesola in particular, because when I got the email asking if I’d be interested in previewing the book, I didn’t exactly go in with a positive attitude.

In Draw Blood, every story is only given around five to eight pages. Not a lot of time to establish much in the way of tension. What they did instead was present more of an introduction into a particular world, lay out the path a story is taking, and then end it right before what would be the Big Reveal in a movie. The reader is given just enough information to get the ball rolling, and then allowed to finish it off themselves. As for the stories themselves, they cover a pretty decent range of horror niches. We’ve got zombies, vampires, and werewolves, in settings ranging from rural America, to the Big City, to outer space… No joke, there really should be something here for everyone.

Speaking as someone who really isn’t a huge fan of horror comics in general, this is a piece of work well worth looking for those who are. At the time of this article, I didn’t have a definite release date, but Hannu Kesola said it was going to be posted on the Top Secret Press site very soon. Keep an eye out, and if you’re looking for more subtle scares rather than the typical gorefest this might just be the book for you. 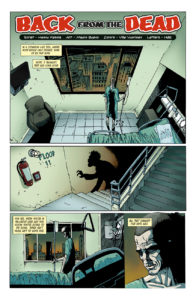 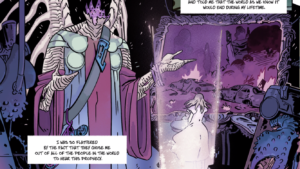