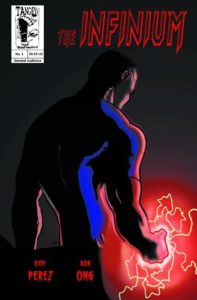 The Infinium is a story of innocence, hope, forgiveness and redemption.
Where one man’s question of self purpose propels him in the path to inherit the Infinite.

Brian Villa a down trodden ordinary man wants more from his life. The only problem is that he’s about to get it! Sensing his thoughts, the enigmatic life force known only as The Infinium, seizes Brian from earth and propels him to the center of the universe to the planet Durdara to participate in the greatest galactic gladiatorial blood sport ever assembled; In order to fight for sole possession of the most loved, feared, and enigmatic power in the Universe. Brian Villa an unwilling participant and devoted pacifist, neither craves this power nor does he wish to participate in any form of mortal combat. His only desire is to return home, and in order to fulfill that wish Brian must not only break a solemn vow of non-aggression, but battle to the death against some of the fiercest warriors ever gathered in the known galaxies in order to fulfill a destiny that he craves nothing of.

What Brian doesn’t realize is that the Infinium did not choose him for his abilities, rather he was chosen for his nobility.

Join us as we take you through a cosmic odyssey of epic proportion where one man’s wish for purpose will propel him toward an unfathomable quest to become a god!

To the victor comes immortality, to the vanquished oblivion.
— A Tango Unlimited Production © 2010
———-

In a story that took me back to some of the old comics I read as a kid, The Infinium came across as a true labor of love. Rich Perez and Ron Ong have concocted a series reminiscent of the Dreadstar series by Jim Starlin, and Captain Marvel (pronounced “Mar-Vell”, not Shazam… that’s totally different) from Marvel Comics. Everyman Brian Villa, an average earthling, is mowing his lawn and pondering the things that we all ponder while mowing the lawn… “Is there more to life than this?” In a flash, he’s yanked away from his life and deposited on a distant planet. Now, surrounded by alien beings who pretty much all want him dead, Brian is faced with the answer to that question. Now he’s left to wonder, “Did I really want to know?”

The Infinium is an all-knowing cosmic entity, without form or limits, that has come to the conclusion that it’s reached the pinnacle of its existence. It knows everything there is to know, and has seen everything there is to see. What it’s drawn from these realizations is that it wants to experience the universe anew, and to that end has devised a means of selecting a sentient being to give itself to. No kidding, the Infinium is seriously going to invest all of itself into a single worthy being, so that it may once again experience all of the beauty and magnificence there is out there. How best to chose someone for that dubious honor? Well, you hold an inter-galactic beatdown, of course!

Beings from every corner of the universe, from the wise and mysterious Eteriman to the juggernaut Arnok the Invincible, are now vying for the chance to take control of the power the Infinium is offering, and few will allow things like mercy and honor get in the way of achieving their goal. In the middle of all of this is Brian, whose single overriding desire is just to get back home to his wife Kelly and their daughter. Along the way, he’s determined to maintain his hard won pacifistic ideals. See, as with all reluctant heroes, Brian Villa has a past he’s not proud of. Unfortunately, as is again the case with reluctant heroes, ideals and moral outlooks are generally impossible to hold onto when faced with the destruction of everyone and everything that you love.

The look of the book is pretty good, once again invoking a lot of the classics that I was reading back in the seventies and eighties (yes, I’m that old… shut up). The style of Ron Ong is occasionally rough and unpolished, but in the context of the story it really worked for me. None of that takes away from the fact that Ong manages to convey some pretty far-reaching concepts, and composes some pretty good action scenes. For all that I’ve said about the title bringing up memories of other works, it all still holds up as an original work.

Much of the same can be said about Rich Perez’s writing. Yes, it is a little rough in spots, and could have maybe benefitted from another round of editing, but it all still comes together in the story. To be honest, many of the lines where the language or syntax seemed a little off, it was an alien talking and I was more than happy to put chalk it up to an inter-galactic language barrier. Hell, for all I know that really is the case, and if it is let me just convey my apologies to Mr. Perez right now. But even if it’s not, once again I have to go back to this series being put out there into the world, a labor of love produced by a handful of motivated and creative people.

Rich and Ron, you’ve put together a story that kept me moving right along through six issues with Brian, hoping for the Earth to come out of the whole ordeal more or less unscathed. That’s more than some of the big publishers can say. 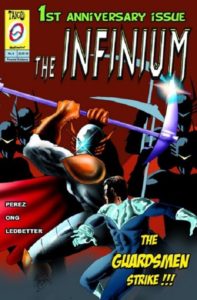 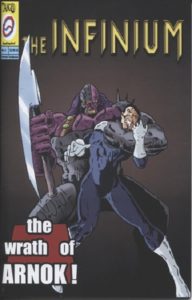