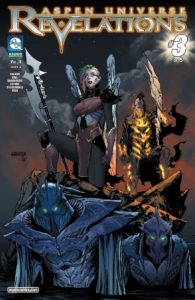 The most groundbreaking event in Aspen Comics’ history continues!!!

For over thirteen years, devoted Aspen Comics fans have clamored for something special…something unique…something…UNIMAGINABLE! Aspen Comics has answered the call for loyal fans and new readers alike!

In the Crisis-bred tradition of crossover events, Aspen Comics does nothing less than threaten all of existence. When you stop and think about it, we’ve collectively experienced world-ending danger so many times that by now it should be at about the same level as realizing that you’ve run out of toothpaste (but not as bad as getting served decaf at the local java shop…). That said, the twist that Aspen throws into the mix is the idea that the ripple effects can be felt from the present, into the future, and then back again. The future threat is verified by the presence of Malikai, the “chosen one” from the year 2211 (another creation of the great Michael Turner, Soulfire) destined to return magic to the world. He’s seen the effects of this current threat firsthand, and is determined to do whatever it takes to prevent a dark future from ever happening.

What is this threat? His name is Halazeel, and he’s either a totally insane and extremely powerful megalomaniac, or he’s just an extremely powerful megalomaniac. Either way, he’s convinced that by destroying our present he will become more powerful in the future. Malikai can attest to present events starting to have an effect in the future (his present), as he’s already seen an ally- Grace, the magical being who tasked Mal with renewing magic in the pages of Aspen comic series Soulfire- become twisted and turned to Halazeel’s cause.

Who could stand against a being able to manipulate events throughout the timeline? None other than Aspen Comics’ flagship hero, Fathom (aka Aspen, the character for whom the company is named). She’s not alone, joined by Malikai, and former enemies Kilian and Kiani in a show of extremely good sense- if Halazeel is able to destroy the world in the present, how the hell is Kilian ever going to rule it? Will the combined efforts of these unlikely allies be enough to halt the impending infinite crisis during this not-so secret war? Will Halazeel succeed in his plans for a rebirth in the future? Can these heroes succeed or will it all result in a universe spanning civil war ending in maximum carnage?

The writing in Revelation is pretty straight forward. I’m not as familiar with these characters as maybe I should be, but for the most part it all seems to work. No one character seems to stand out, which is a good thing for a crossover event like this, and everyone is given a solid moment in the spotlight. Where I feel the title really shines is in the artwork, and that is as it should be with all of those people involved. This is a very pretty book, with pencils, “digi-inks”, and colors coming together into an end result that’s visually impressive.

If you’ve already been reading any or all of the titles from Aspen Comics, chances are that you’re already deep into this crossover event. If you’re like me, and you’re not as familiar with these characters or their stories, maybe this a chance to jump into a very cool looking comic universe that maybe hasn’t gotten the attention it deserves.