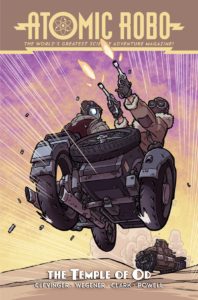 The year is 1938 and a vril weapon is being developed that will rival even Tesla’s lightning weapon designs! Cue Atomic Robo, Jack Tarot, secret government agencies, moon men, magical arctic circle elves, jetlagged aliens, elderly rights activists, youngling laborers, and the manifestation of human hope to help save the day!

A break neck pursuit across a desert landscape. Two figures in full flight on a motorcycle, one driving and the other taking aim with two pistols at their pursuers from a sidecar. Those pursuers show little regard for the small arms fire, feeling secure in their armored tanks. Insanely, a shot either ridiculously lucky or improbably skilled wreaks havoc among the armored column and eliminates the immediate threat. Sounds incredibly implausible, doesn’t it? Well, good readers, get used to that because we’re talking about adventurer extraordinaire, the one and only, Atomic Robo. And with science on his side, nothing is impossible!

Reluctant American agent Robo believes himself to be free and clear of any obligations, so when he’s summoned by General Chennault for a briefing on a new secret mission, he’s skeptical. That skepticism in the face of the gruff general holds true, however the hard-nosed officer has more than a scary demeanor on his side. When faced with “Hypergeometric loop lensing effects on zero-point energy condensates”, Atomic Robo has no choice but to answer the call back to action.

I have no idea what any of that stuff means either… But the breakdown is that the Japanese Army has abducted Dr. Lu Huang, a Chinese physicist who may have unlocked the key to zero-point technology. Now the Axis forces seek to harness that technology to create the superweapons that will win them the war. Now, Robo will have to join forces with Chen Zhen, legendary leader of the Shanghai underground, and his unexpected partner, expert marksman… er, woman… and former ally of Robo’s, Helen. With Japanese forces closing in, the three are going to have to work together to prevent a quantum catastrophe!

Seriously, folks, if you haven’t already read any of the adventures of Atomic Robo, brainchild of Brian Clevinger and Scott Wegener, you’ve done yourself a huge disservice. These are the comic books that are pure entertainment from start to finish, regardless of the wherever they are in the timeline. That means something, given that Robo’s origins take him back to the laboratory of Nikola Tesla, and his adventures have carried him through two World Wars, to Mars and back (he hasn’t been a fan of Carl Sagan since), set him against time traveling dinosaurs (but he’ll argue the validity of that one), and even put him in a fight for all reality against the horrors of H.P. Lovecraft (even the Old Ones were no match for Science!).

Through it all, Atomic Robo has maintained the sense of fun and adventure, the intelligence and wit, the over the top and outlandish action that reflect why I still read comic books. The combined efforts of Wegener and Clevinger have resulted in a host of characters, both fictional and historical, that have kept me entertained through multiple readings. They’ve also ensured that I grin like a madman whenever I see new stories coming from the folks at Tesladyne LLC.

So it is with great pleasure and fanboy glee that I urge each and every one of you to stop what you’re doing right now. Grab a copy of this blast of a book in whatever format you see fit. If you hadn’t been introduced to Atomic Robo before now, I have every confidence that you’ll read Atomic Robo & the Temple of Od and wonder to yourself- quite possibly aloud and with dismay- “How can this be?”

Okay, you might not like it that much… But in all honesty that just doesn’t make sense to me, and if that’s the case we probably shouldn’t be friends anymore. 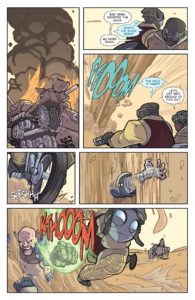 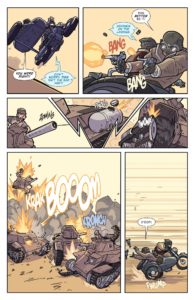 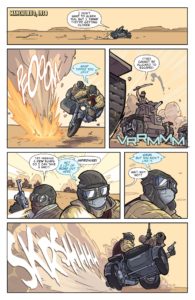