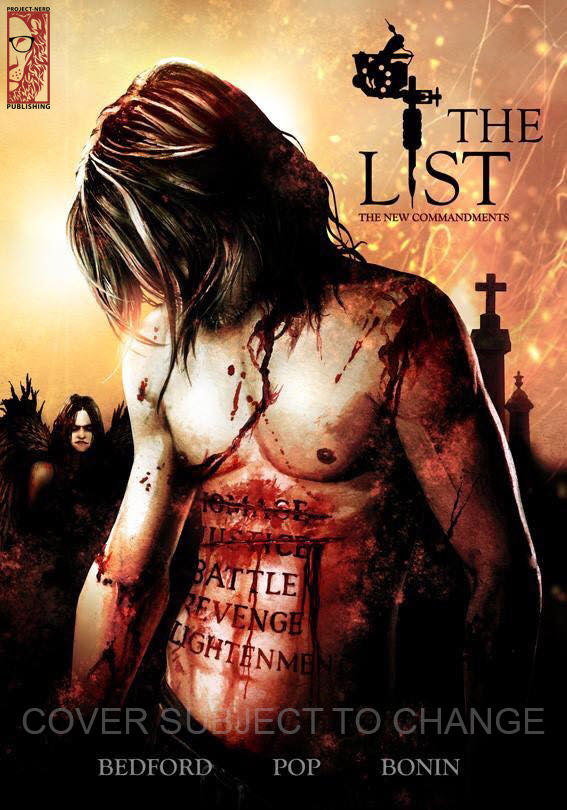 The hit horror graphic novel, The List, a 200-page graphic novel from Australia, is set to be unleashed in North America through Project-Nerd Publishing.It’s unlikely you’ve encountered any story quite like The List (Paul Bedford, script; Henry Pop, Pencils; Tom Bonin, Inks), but if comparisons are to be drawn, think works such as The Crow, Preacher, and the movie Seven.

“True horror needs no cheap-tricks, no jump-scares, no clichés to scare its audience. True horror sneaks its tendrils into your mind, subtly commandeering your psyche to bring its darkest reaches to the fore,” said creator Paul Bedford of his hit graphic novel. “The story comes at the reader like a waking nightmare; it is surreal and heavy with menace and dread.”

The List follows ‘The Son’ – the “New Commandments” tattooed down his torso – as he stalks the streets, plunging his city into a state of terror. The graphic novel is a relentless assault of suspense and horror, keeping readers guessing until its twist ending hurls the reader back through the story in the fashion ofThe Sixth Sense.

Fans that have experienced the book praised it extensively: “This must be the most disturbing graphic novel I’ve ever encountered…” and “I finished reading it today, and I can honestly say I have never read anything like it. It disturbed the f**k out of me! I have never felt so uncomfortable reading something before. And I mean this all in a good way!”

Project-Nerd Publishing is excited to bring a full release of The List, with a limited engagement in the Fall of this year, and a full push in early 2017 featuring a new cover from world renown artist, Menton J. Matthews III.

The List is further proof that Project-Nerd Publishing’s goal of bringing a diverse collection of some of the most exciting and thrilling stories from around the world is in full force.

You can learn more about The List and the other exciting titles from Project-Nerd Publishing at pnpublishing.com

About Project-Nerd Publishing
Founded in 2015, Project-Nerd Publishing is a division of EEON, LLC offering original and independent comic books and geek literature. The division was founded with the intention to move the brand from simply covering and reviewing comics and books to actually creating and publishing their own while maintaining a balanced focus on both fans and creators.

About EEON, LLC
EEON was formed in 2016 as a parent company for specific divisions previously operating under the Project-Nerd name. Currently housing publishing, photography, podcasts, video, and cosplay ventures, EEON was established to better serve a vast and growing geek community