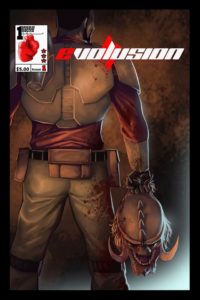 Evolusion takes place in a post-apocalyptic future, around 2018, after the last world war destroyed most of Earth. An unknown terrorist organization released a chemical gas compound via explosives around the world during the battles, and the gas, as well as the war, left most of the human population dead, leaving only10% to deal with the fallout. 5% were left normal, and something within the gas compound left the other 5% changed forever, evolved to super-human levels. 1% of the 5%, developed god-like powers. Most of the Earth’s plant and animal life evolved as well, some turning into totally new mutated creatures.

Evolusion centers around 3 characters in the 1%, and their fight to uncover the truth behind the events leading up to the war that caused the deaths of billions, and their search for a true purpose.
———-

While I was wandering around Wizard World Chicago this last weekend, I had the chance to meet and chat with a few indie creators and talk about their books. Among them were the very enthusiastic Robert Reyes and Mario Colao. These guys were hyper-enthusiastic about their book and more than happy to spend a few minutes telling me about it. It sounded very cool… this is a bit from their Facebook page, giving a little insight into the tone they’re looking to set with their book:

Evolusion is a comic book for movie and comic lovers. Dynamic art, action, suspense, drama, explosions, fighting, and all the stuff you guys love. Keep on coming back for more!

So I picked up the first three issues that they had on hand, and once I got back home and settled in a little bit, I sat down for some reading. I have to say that their idea on making the comic series flow like an action movie was pretty spot on. Issue one drops us right in the middle of it, introducing readers to the post-apocalyptic world of 2018. A world war wiped out huge chunks of the Earth’s population, and an engineered virus took what was left and turned it inside out. The virus was designed to genetically alter its host, twisting them around on the evolutionary ladder to some pretty impressive effects. The story opens up with an elite military unit on a rescue mission, deep into F.O.E. (Freaks Of Evolution) territory, looking for human survivors. Very quickly, we’re shown the results of the gene virus as the unit comes under attack from what looks like huge sabertooth primates. The fight is on, and it moves fast. The good guys win, not without cost, and the human survivors are escorted to Nexus, the last human city built up within the remains of what used to be Chicago.

The following issue, as in the second act of many action movies, spends time establishing history and the current world. This was a point where the story bogged down a bit as there was a lot (a LOT) of reading as the story’s POV character, Amir, is given the Nexus tour. In all honesty, I’m not sure how else some of the info could have been relayed to Amir, and the reader, but it did kind of drag. In most writing, I’d say that the best plan is “show, don’t tell”, but I don’t know that it would have really saved that much reading time. In this case it might just be a case of “po-tay-to/po-tah-to”.

The third issue gets us back into the action, and gives us a solid introduction to three more of our main characters, brothers Mac, Grant, & Lee. All three have been affected by the mutating virus, but fall within the above mentioned 1% and have been “gifted” with incredible powers. I use the quotes there because Grant’s power is, as far as he’s concerned, more curse than anything else. He’s become a sort of FOE lycanthrope, turning into a rampaging red velociraptor-man looking beast when he experiences pain. Mac has the ability to turn to smoke, and Lee is a living power battery, able to create and harness enormous amounts of electrical energy.

As the story is presented from Amir’s point of view, the reader learns pretty much everything at the same time he does. That results in some spots that read like plot jumps, but are just sudden revelations as Amir pieces his new situation together. At times it’s a little disorienting, but again it plays into the way Reyes & Colao have chosen to put their story together. They really are engaged in some pretty deep world building, establishing a ravaged planet and a populace that’s finally come to understand that survival is going to mean finally putting aside meaningless differences of race, creed, and ideology. That’s never going to be easy, and for the most part I think they’ve done a fair job of it. The art by Ryan Best pulls it all in and serves it up in a pretty solid package.

My advice, if you’re looking for something new, something indie, or something post-apocalyptic, is to give Evolusion a try… Just keep in mind that taken individually, these first three issues aren’t going to make much sense. It’s only when you get through the backstory, the character intros, and the hints at things to come that you’ll start to get a bigger picture. 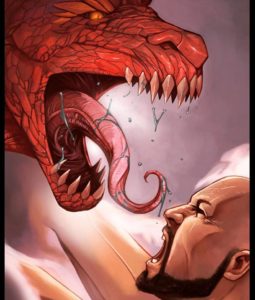 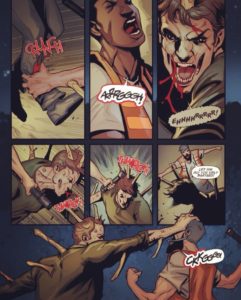 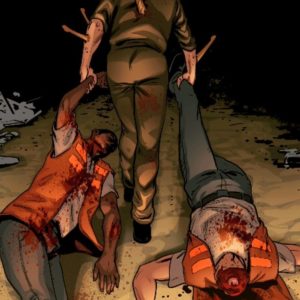