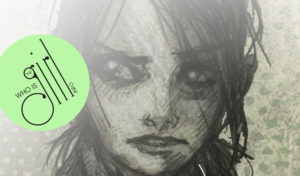 As a child growing up in a factory town, she dreamed of living in the big city and one day becoming famous. Now she’s here. And she’s The Girl that everybody’s talking about. Now you can find out why. Explore her inner thoughts with her blogs. Watch her live the life she’s always dreamed of and hear her secret confessions in her video diary. Share her inspiration by listening to her favorite music. Now is your chance to become part of the movement. Come in and get to know The Girl!
———-

So this one popped up on the radar a couple days ago when creator Cary Polkovitz asked if thePullbox would be interested in giving Who Is the Girl? a look. At first glance, it wasn’t an easy comic to throw a tag on, despite its website identifying it as cyberpunk. At second and third glance, it didn’t really get much easier. Where cyberpunk is generally more about dystopian societies, advanced computer networks, and packs of street samurai roaming the alleys, Who Is the Girl is about- shockingly- a girl. She’s the kind of girl many of us have known in our lives, the fun-loving and seemingly carefree party goer that everyone seems to like. She flits in and out of people’s lives, dancing on the wind and going wherever the party takes her, a mystery to everyone around her. Even her roommate, Dogg, doesn’t know her real name. For the record, “Dogg” isn’t his real name either… The Girl believes that by exchanging names you change the direction of a relationship, giving it labels and expectations instead of just letting it be what it is. For the Girl, life is a party and she’s determined to make sure that it’s an epic one. Her only real ambition in life is to be remembered, to leave something tangible behind and to that end she hosts a video blog.

Things seem to be looking up. The Girl gets noticed by online image consultant Aimee, who promises her the life of the internet sensation. Aimee recognizes the qualities that will make The Girl The Next Big Thing, and for a mere 15% swears that she’ll be remembered, that the party can go on indefinitely. It all sounds great, too good to be true, like The Girl’s whole life is about to take off to the next level.

And then the story gets dark. It gets really dark, really fast, before you even have a chance to process the change. I actually backed up and double checked to make sure I hadn’t missed something. In the span of just a few panels, we’re ripped from the Girl’s perpetual party life and thrown into a seedy cringe inducing world that’s going to bother the more sensitive reader. Aimee isn’t the only one to notice The Girl, and this other person’s attentions aren’t nearly as fun as Aimee’s. The Girl finds herself abducted, blindfolded, and locked in a room. Her captor feeds her, drugs her, talks to her, and in their talks we start to see that the party life of The Girl has its roots in some pretty dismal beginnings.

I’m going to say right now that Who Is the Girl? isn’t going to be for everyone. When it takes its darker turn, the story starts digging into subject matter that some people aren’t going to be comfortable with. Hell, I don’t consider myself a particularly sensitive guy, and at times I was put a little on edge. If you have no interest in this kind of gritty storytelling, that’s fine. There’s a lot out there for you to get into. If you haven’t been completely put off by my grim warnings, then you might have something here to get wrapped up in because Cary Polkovitz has created a world that involves more than just a web comic. If you check out The Girl’s blog site, you can find actual video blogs acted out, The Girl’s playlist of favorite songs, and even one of those “getting to know you” questionaires that asks things like whether you prefer coffee or tea (FYI, The Girl is a total coffee addict). In this, Who Is the Girl? goes beyond the realm of webcomic, and becomes a stepping stone into a much larger world…

Which, as I chatted with Cary Polkovitz a bit, seems to be the point. Who Is the Girl? the web series expands on a graphic novel in the works titled UKIYO/genius loci, currently on Kickstarter, and described as “One part Ghost in the Shell and one part Leaving Las Vegas”. I asked Cary how the two stories tied together, and his answer was, ” It expands upon it. In fact parts of the webcomic will appear in the graphic novel though the book will have other storylines woven through it.”

If for no other reason than the sheer ambition of the project, Who Is the Girl? deserves some attention. Fortunately it does have more going for it than that. The artwork is actually pretty damn cool, with characters rendered onto photographic backgrounds, just stylized enough to stand apart from the crowd. Also, I will give credit where it’s due and say that the writing, particularly the dialogue, is pretty damn good. In general, and any prospective or professional writers out there feel free to back me up or shoot me down on this, dialogue is one of the toughest things to get “right”. Just putting words down isn’t enough, because when you’re talking about creating interactions between people, you have to find the balance between just making words and making those words sound like natural speech. I think this is a good example of well written dialogue, with the characters’ individual “voices” coming through.

I think I’ve given enough reasons to take a look at this project. Hopefully I haven’t turned too many off of it, but when you’re putting together a story like Who Is the Girl?, there is the risk of limiting your audience a bit. For my part, even in the parts that didn’t particularly appeal to me, it was always interesting and even well done. 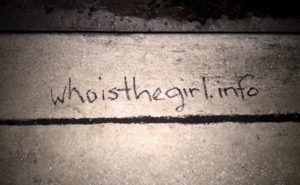