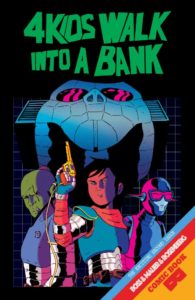 A FUN(ISH) CRIME CAPER ABOUT CHILDREN!

11 year old Paige and her weirdo friends have a problem: a gang of ex-cons need her dad’s help on a heist… the problem is those ex-cons are morons. If Paige wants to keep her dad out of trouble, she’s going to have to pull off the heist herself. Like Wes Anderson remaking RESERVOIR DOGS, 4KWIAB is a very dark & moderately humorous story about friendship, growing up, d & d, puking, skinheads, grand larceny, & family. As told by TYLER BOSS (Lazarus, Vice.com) & MATTHEW ROSENBERG (We Can Never Go Home, S.H.I.E.L.D.: Quake)
———-

“As far back as lunchtime I always wanted to be a gangster.”

With that single opening line, the first issue hooked me in and gave me the first of several full on out loud laughs. Issue one opens up with a group of mighty(ish) heroes doing battle with a fierce(ish) dragon. We’re introduced to our main characters through the actions of their tabletop RPG characters, to some pretty good effect. Aggressive tomboy Paige is playing the stalwart knight Sir Manly. Uber smart and ultra shy science whiz kid Walter plays the unimaginatively named elven princess Walter. Berger the Obnoxious is playing orc strongman Crotch the Sticky. Finally, very tall 7th grader Pat “Stretch” Schramm as the “DM” is playing the part of the dragon, and having a pretty good go of it as his friends argue over things like game mechanics and Berger’s tendency to muck up just about everything they do. The gimmick works as it throws us right into the lives of this group of very unlikely friends, showing them simultaneously at play while laying the groundwork for their unique personalities.

Issue one introduces us to the players in this tale of fun and larceny. Paige’s Dad, Mr. Turner, comes across as a pretty cool dude, very tolerant of the odd group of friends his daughter’s collected. Everything looks like it’s going to be pretty normal until (dun dun DUUUHHNNNN) shady characters Vernon, Hayes, Silk, and Skinhead Mike roll up to the front door asking to see Paige’s father. Paige, unimpressed with rough looks and facial tattoos, earns the ire of temperamental and diminutive badboy Silk. In a classic display of “little man syndrome”, Paige’s lack of respect gets her a bloody nose (with a prominently displayed PSA- “Under almost no circumstances is it okay to wander into someone’s house uninvited and sucker a punch a kid in the face”). Berger steps up with a totally reasonable response, launching his character miniature into Silk’s eye with a slingshot. Before total chaos has a chance to really dig in and get comfortable, Mr. Turner makes his presence known, and the group of tough guys find themselves looking down the barrel of his (totally legal, I’m sure) shotgun as he asks them to leave.

From there things get pretty normal. The kids go to school, deal with bullies, eat lunch, get a ride home from the aforementioned shady characters, and discover that Paige’s Dad might not always have been the good and proper father figure that he is today. You know the saying, “Every sinner has a future, every saint a past.”

Issue two offers us more sage advice. “You don’t make up for your sins in school. You do it at the arcade. You do it at the candy store. The rest is bullshit and you know it.” I’m not totally sure what the means, but it sounds deep as hell so I’m gonna go with it. In this issue’s opening pages Paige, Stretch, Walter, and Berger are playing a videogame, taking on the roles of (respectively) mutated Chernobyl gang leader Franky Barbarian , skeletal war priest Lance Cardinal Death, robotic mistress of mayhem M.A.D.A.M. Destructrix 7, and mighty warrior from a doomed planet Bae K’on. After the game, they sit down for some banter and pizza. More LOL’s ensue (my wife thinks I might be losing it a little bit), the bullies show up again, and Paige winds up getting arrested leading up to the next plot twist… which I’m not going to spoil. All I’ll give away is that it’s really driven home that even the coolest, kindest, most loving single dads can have a past that they might not be proud of.

4 Kids Walk Into a Bank is one of the most entertaining, well-written, sardonic humor filled comics I’ve had the pleasure to read. I’ve seen comparisons to the Goonies, one of my childhood favorites that still gets watched from time to time, and I can’t say that I disagree. Paige and her friends have the depth and character of fully realized people. They’ve all got stuff going on behind the word balloons, things that they don’t say out loud, and layers that make each of them interesting in their own right. Individually, these kids would be a handful. Even wallflower Walter, who I personally think could easily be a super-villain if he put his mind to it. The bonus to that would be that his rants would be really, really quiet. I can see each and every character from the Goonies in these kids, with the added bonus that none of them fill only one role. At one point or another, they’re all the “Mouth”, the ringleader, the goofball comic relief. All tropes get thrown into a blender, and we are left with fully realized, three dimensional people that have been dreamt up, drawn out in a style that suits the story perfectly, and presented in comic book form. It all works!

There are no superheroes, no cosmic engines of destruction, no genetic mutations destined to protect a society that fears and hates them. What this limited five issue series has is some outstanding writing courtesy of Matthew Rosenberg, with what I would consider a very crisp, almost minimalist artistic design from Tyler Boss. This is a book that I can’t recommend enough. Go get it! 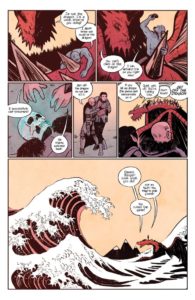 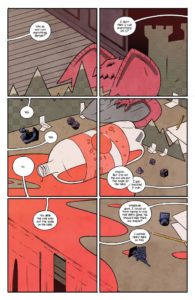 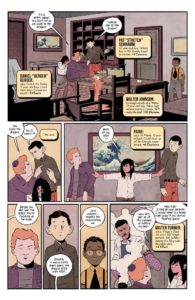 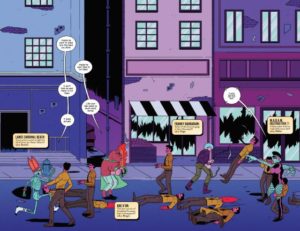 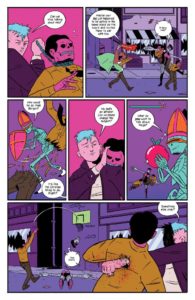 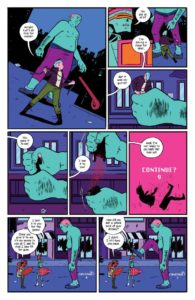