Ursula Stormholder was raised by pirates with a chip on her shoulder the size of Uranus, but for the right price, she just may save the universe. 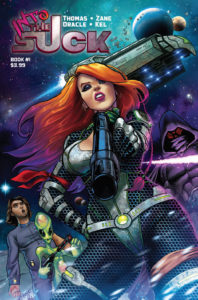 Ursula Stormholder is the complete package: Beauty and the Beast. The daughter of the most feared pirate in space, she makes her living as a privateer. Pick up, delivery, and the occasional kidnapping are among the list of services she offers. While trying to make a living, she is also making a reputation for herself outside of her father’s shadow. It’s not necessarily a good one.

She has friends and enemies at every port, not equally proportionate.

The art team on “Into The Suck” are writer Keith Thomas, artist CB Zane, colorist Oracle (aka PH Fuller) and Letterist Kel Nuttel and they have outdone themselves. You really have to see it to believe it. And with the help of their Kickstarter-friends they already met their funding within mere days!

This story, which is a six issue miniseries begins with her taking on a job to pick up and deliver a seemingly normal human (if a heavy set drunken frat boy can be considered normal) to her broker. When she returns with her prize, she finds her broker murdered and must now play a cosmic game of cat and mouse with her paycheck named Armando in tow as she seeks to discover who originally brokered the deal so that she can get paid.

In the process she is caught up in her love/hate relationship with her father, chased by the Royal Fleet and ultimately forced to lead a rescue, thwart a villainous foe bent of universal domination and save the galaxy… much like her father did years ago when he was a hero, before this area was the cold, dark, war ravaged place they call The Suck.

That seems like an awful lot to handle for an ass-kicking, pig-headed girl from the bad part of space. Not to worry, despite being socially toxic, she does possess enough charm and warmth to surround herself with a friend and pilot, the ever lovable little green alien Squee, a romantic interest in the form of Prince Ruck who was once the kidnap victim of one of her father’s many schemes in the past and her trusty mechanic friend Emery who keeps her ship, the Queen B, operational and always loaded properly for the next mission.

Imagine a super model who can beat up the toughest guy in the room, own the crowd with a wink of an eye and then belch the alphabet. What’s not to love?

“Into The Suck” is an action adventure comedy set in a very serious world populated by colorful characters who don’t particularly take it too seriously.

“This is going to be huge.”

“It feel like the late 80’s Indy stuff I love, but with much cleaner execution.”

“I already have a really good sense of the main crew without a whole lot of exposition, which for a first issue is great!”

“I laughed so hard I scared my cat.”

Come join the crew of aliens and action, of one-liners and romance, about universal domination and saving the galaxy all roled into one. Kickstarter-ing now at https://www.kickstarter.com/projects/700688232/into-the-suck 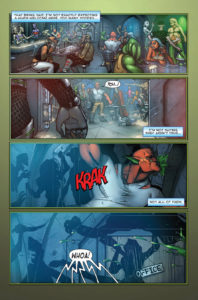 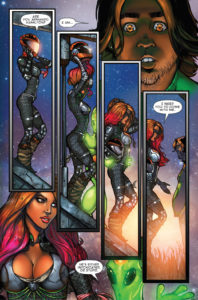 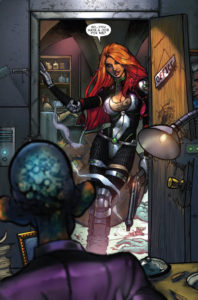 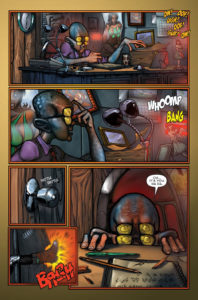