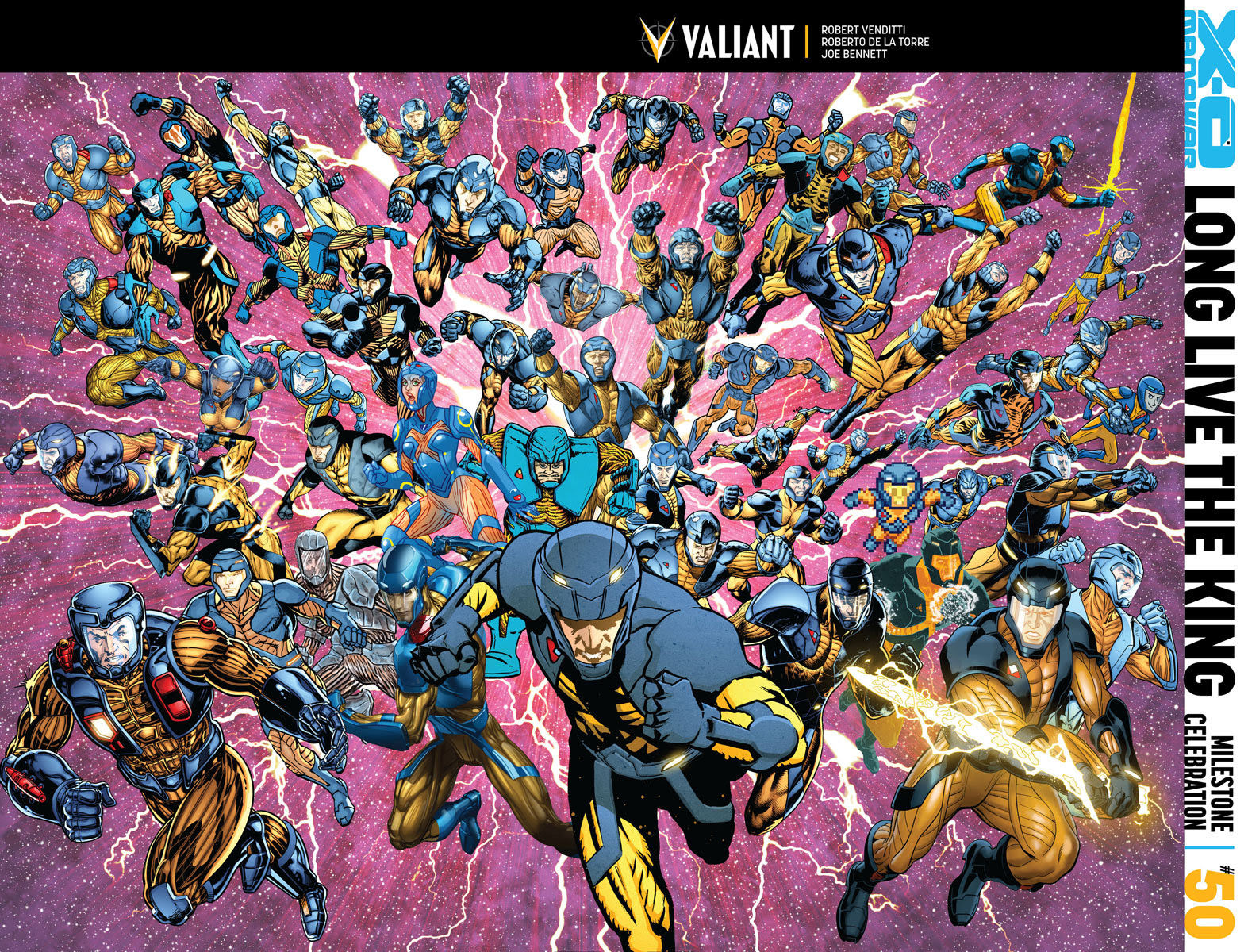 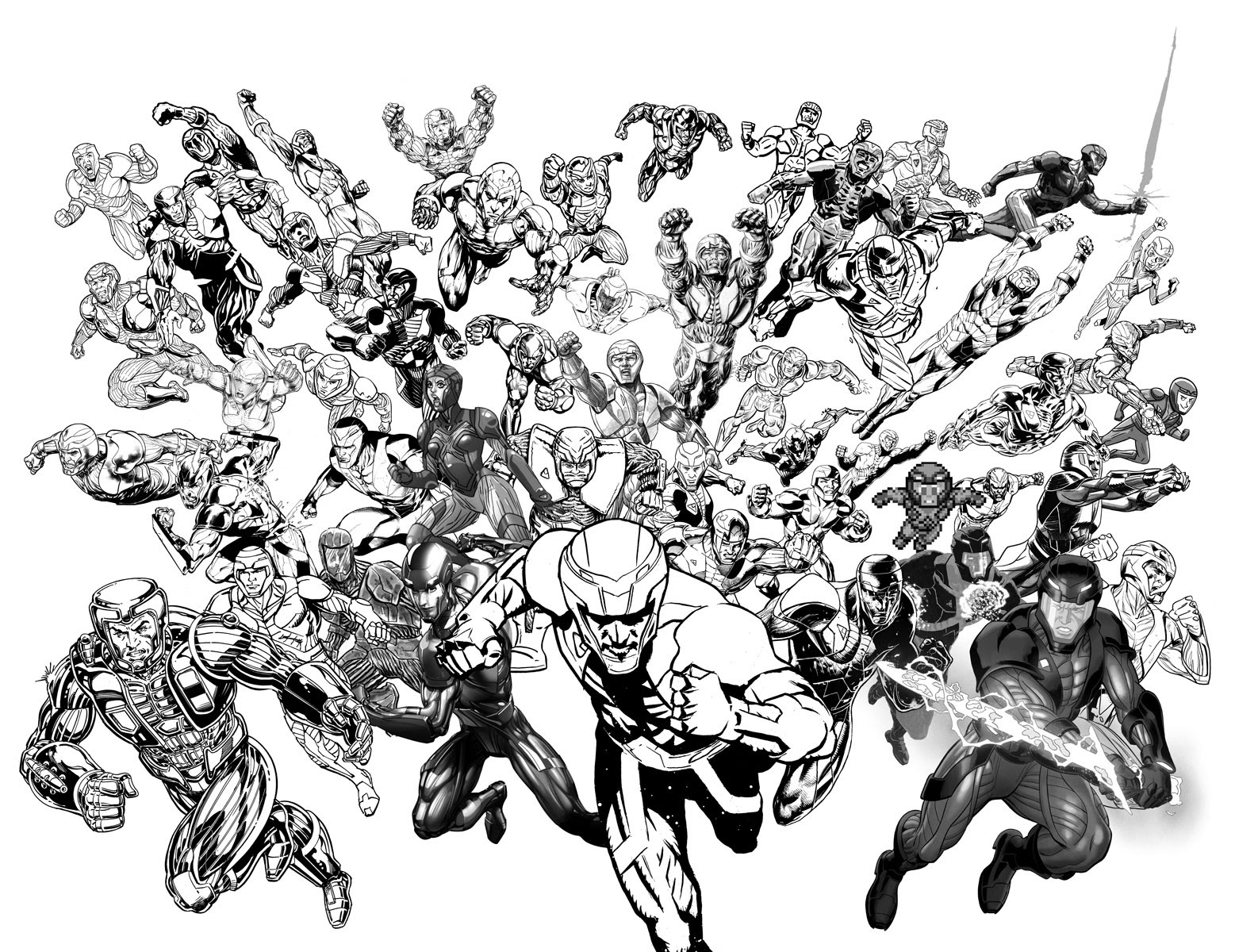 BRITANNIA #1 (of 4) (“FUTURE OF VALIANT”)
Written by PETER MILLIGAN
Art by JUAN JOSÉ RYP
Cover A by CARY NORD
Cover B by LEWIS LAROSA
Variant Cover by ANDRES GUINALDO
Variant Cover by RYAN LEE
Variant Cover by DAVE JOHNSON
Blank Cover Also AvailableOn the fringes of civilization, the world’s first detective is about to make an unholy discovery… Ruled by the Fates. Manipulated by the Gods. Commanded by Caesar. In the year 65 A.D., one’s destiny was not his own. At the height of Nero’s reign, a veteran of Rome’s imperial war machine has been dispatched to the farthest reaches of the colonies to investigate unnatural happenings… In the remote outpost of Britannia, Antonius Axia – the First Detective – will become Rome’s only hope to reassert control over the empire’s most barbaric frontier…and keep the monsters that bridge the line between myth and mystery at bay…

NINJAK #19
Written by MATT KINDT
Art by KHARI EVANS with ANDRES GUINALDO
Cover A by MIKE CHOI
Cover B by DIEGO LATORRE
Cover C by RYAN BODENHEIM
Variant Cover by MARC LAMINGTHE FIST & THE STEEL fight onward! Riddled with an uncanny disease in the present, Colin King has seen what the future holds – and it is death! Decades from today, destruction looms…and Ninjak and the Eternal Warrior will be our only hope! But even after years on the battlefield, are these weathered veterans still strong enough to forestall an evil that now threatens all of humanity? Glimpse the future of Valiant’s two most dangerous men here as Ninjak and the Eternal Warrior baptize their formative partnership in the blood of many men!

And meanwhile, back in the modern day, Ninjak must exhaust every resource at his disposal to find a cure for the mysterious, Deadside-spawned affliction that continues to destroy his body… But the clock is ticking fast and each step that MI-6’s master super-spy takes brings him one step closer to the grave!

WRATH OF THE ETERNAL WARRIOR #11 (NEW ARC! “DEAL WITH A DEVIL” – PART 1)
Written by ROBERT VENDITTI
Art by ROBERT GILL
Cover A by KANO
Cover B by JUAN JOSÉ RYP
Cover C by ROBERT GILL
Variant Cover by THONY SILAS

Gilad Anni-Padda, the Eternal Warrior, has sacrificed his humanity for the betterment of the Earth. Empowered with the gift to recover from any wound – and even death itself – he has waged an endless crusade to guide the path of civilization through the ages. But as the centuries pass and his list of battlefield victories grows, he is fated to always reap the same sad reward: to see his families, his children, and all his loved ones…age, wither, and die…

Now, the Eternal Warrior will be presented with a choice that could end his grief forever. An opportunity to resurrect the fallen sons and daughters that he believed forever lost. But this chance for peace and happiness will come at a terrible cost… and in service to an evil far greater than any Gilad has faced before…

A&A: THE ADVENTURES OF ARCHER & ARMSTRONG #7
Written by RAFER ROBERTS
Art by MIKE NORTON
Cover A by KANO
Cover B by DARICK ROBERTSON
Variant Cover by ADAM GORHAM
Variant Cover by MIKE McKONE

No more clowning around!

The hunt for Armstrong’s estranged wife is taking a strange turn through America’s most bizarre traveling circus…and it’s no laughing matter! Besieged by a deranged troupe of malformed Armstrong clones, the world’s hardest-traveling adventurers may have finally met a match more dysfunctional than they are! And if that wasn’t enough absurdity for one day, a Russian science bear is about to come barreling through the big top with grave news for Archer & Armstrong!

Terror by twilight on BLOODSHOT ISLAND!

Trapped in a remote jungle paradise with no hope of escape, Bloodshot has discovered the secret behind the merciless technological monstrosity called Deathmate – and the truth has thrown his entire world into a tailspin of tragedy! But what revelations behind Project Rising Spirit’s horrific creation could bring even Bloodshot to his knees…and forever shatter the spirit of the man known as Ray Garrison?

New York Times best-selling writer Jeff Lemire (Moon Knight, Old Man Logan) and blockbuster artist Mico Suayan (BLOODSHOT REBORN) push their bloodstained rumble in the jungle past the point of no return with a shocking chapter that will leave the Valiant Universe reeling for years to come!

NINJAK VOL. 4: THE SIEGE OF KING’S CASTLE TPB
Written by MAT KINDT
Art by DIEGO BERNARD and KHOI PHAM
Cover by LEWIS LAROSAThe last stand of Colin King! Colin King, the elite MI-6 intelligence operative codenamed Ninjak, has confronted his past. He’s survived the gauntlet of the Shadow Seven. He’s walked into the Deadside and returned a changed man. Now his greatest trial yet will come to pass as the ruthless assassin called Roku returns to lay siege to Ninjak’s present and future by destroying his life from the inside out – and only the death of Colin King will stop her.

The much-anticipated follow-up to the five-time sold-out series that The Onion/A.V. Club calls the “Best New Superhero of 2015” is here!

At the height of the Cold War, the Soviet Union – determined to win the Space Race at any cost – green lit a dangerously advanced mission. They sent three cosmonauts farther into space than anyone has gone before or since. Handpicked orphans with no connections to Earth, trained as devout Communists, and restricted from having families, they became lost in the stars and encountered something unknown… Something that changed them.

Long thought lost and erased from the history books, Abram Adams was the first to return, crash-landing in the Australian Outback. The few that have been able to reach him believe him to be a deity. They say he can bend matter, space, and even time to his will. But, even with seemingly limitless power at his fingertips, he is concerned only with the secret love he hid away from his superiors and the unborn child he never had a chance to meet.

Now, Myshka, the female co-pilot of the group, has also returned to Earth…but, unlike Abram she had no secret family. Unlike Abram, she still believes in the Communist ideal. And, unlike Abram, she intends to play a very real role in the return of Soviet glory.

THE DEATH-DEFYING DOCTOR MIRAGE DELUXE EDITION BOOK 1 HC
Written by JEN VAN METER
Art by ROBERTO DE LA TORRE with AL BARRIONUEVO and DIEGO BERNARD
Cover by JELENA KEVIC-DJURDJEVICFrom Eisner Award-nominated writer Jen Van Meter (Hopeless Savages, Captain Marvel) and acclaimed artist Roberto de la Torre (Daredevil, Age of Apocalypse) comes a deluxe, oversized hardcover of the Harvey Award nominated series taking Valiant’s spirited occult adventurer beyond and back for a breathtaking, heartbreaking journey into the realms of the unknown!Doctor Mirage talks to the dead… but the only spirit Shan Fong can’t find is that of her late husband, Hwen. When a big-time occultist with a classified military past hires her for a special job, Shan discovers a lead that might close the greatest mystery she’s ever tackled – how to get Hwen back! Now, Doctor Mirage must enter the undiscovered country and cross all the realms of the underworld if she has any hope of rescuing the man she loves…or be forever lost beyond the earthly plane.