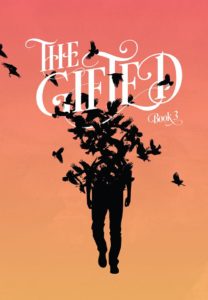 After a long journey through the barren lands outside Union City, the wolf finds refuge among new companions. A ferocious catamount leads the group to a haven of fresh water and flourishing vegetation. Here the wolf learns to hunt. To thrive. To navigate the hierarchy of his pack. But as the crow uncovers the truth behind Union Conservatory—a sanctuary for life… the wolf must choose. Follow the catamount to violence. Or venture out alone.
———-

The world is a mess, thanks to mankind’s tendency to stomp around like they own the place, no thought given to their impact on everything else around them. Despite the best efforts of mankind, however, the earth is healing. It’s shrugging off the abuse, and is reclaiming itself. Included in that reclamation is the presence of the animals, pulling themselves together into a sort of community that only loosely resembles anything that has come before. At the top of the hierarchy is the catamount, a cougar as skilled in the hunt as it is in establishing and maintaining dominance. Following the cougar in a growing community are a host of birds, a bear, and the newest addition, the wolf. All show remarkable restraint and a growing awareness as they each exist side by side with former enemies, predators, and prey. If one didn’t know any better, one could almost see them learning from each other and adapting to new the new situation. Maybe they learned from the poor example shown by humans.

As the story progresses, we do see that the animals are interested in keeping tabs on their neighbors, the local human inhabitants living and working at the Union Conservatory, a supposed wildlife “sanctuary” (note my use of sarcastic quotation marks here… it’s important). In particular, a crow has taken it upon himself to check in and see what these folks are up to. He learns that the people of the Conservatory seem interested in the animals in their care, how they operate, and maybe even how they think. Disturbingly interested. Once again, it seems that the people aren’t particularly interested in learning from their mistakes, and seem more determined than ever to assert their own brand of dominance over anything and everything they can see.

How does a community of apex predators, each the master of their own natural habitat, come together to deal with these usurpers and havoc wreakers? For that answer, we’ll have to wait for the release of The Gifted, volume 3.

The Gifted is not an easy book to classify. Sure, it’s presented in the traditional “comic book” format, with pictures on pages and dialogue in word balloons. Still, as someone who thinks it silly that some comic book readers feel the need to justify their life choices by referring to their comics as graphic novels, in this case it really does fit. The Gifted has so much going on in its pages that I just can’t seem to wrap my head around calling it a comic book. At all.

Okay, Paul, if you’re such a smart guy, what is it?

On its surface, the easiest argument to make is for The Gifted as a cautionary tale of what happens when we try to meddle in the natural order of things. The bottom line is that we are not always as smart as we think we are, and “just because we can do a thing doesn’t mean that we should do a thing”. Another claim can be made that The Gifted tells the tale of human cruelty, our tendency to believe that what we consider to be “the greater good” entitles us to discount the suffering of animals through experimentation as a lesser evil. The Gifted could also be a story of outsiders, loners, altogether disparate individuals, coming together to form something new, a community based on old ways but learning to adapt to a new situation. Personally, I think The Gifted is one of those all-too-rare stories that allows the reader to think whatever it wants, to take away anything it can, and to make its own decisions. I’m sure the creators, Wassel & Gooden, had their own thoughts on what their work was, but in a terrific example of creative self-control they aren’t clubbing us over the heads with it… It becomes a much better story when the reader is given the chance to invest their own thoughts and understandings into it. It becomes something more personal.

Now that I’ve gotten the existential stuff out of the way, we can talk a little bit about the more technical aspects of the book. In the writing, sparse as it is, Adrian Wassel has taken a minimalistic path. Because the major characters of the story are animals, dialogue is sparse enough as it is. Frankly, I applaud the fact that he stayed away from the option of anthropomorphising the animals by giving them dialogue. Their speech is written out in their actions, beautifully illustrated by Nathan Gooden who we’ll talk about more in a minute… Another great trick used by Wassel is where the crow is spying on the humans, following their movements and listening in on their conversations. At first, the human’s dialogue is a jumbled mishmash of seemingly random letters, until you catch on that everything is just horribly misspelled. “Fire” becomes “fajer”, “disease” becomes “dzizes”, and so on… Seriously, it messed with my head, but once I got the pattern down it wasn’t too tough to work around. And then we see, as the crow catches on to the language, learning it, English slowly starts working its way in as the crazy headache inducing jumbles are swapped out for their English counterparts. Overall, that little effect in particular was a brilliant device to show the animal characters adapting, showing and not telling us that these animals are more than they might initially appear.

On to the art, beautifully rendered by Nathan Gooden. Wow, I don’t really know what I can say about it, other than that it’s spectacular. Done mostly in black and white, Gooden uses color to show where the environment is returning to its natural and healthy state. The animals are all drawn with terrific detail, and I have to imagine that there’s a shelf of reference books, bowing a bit in the middle with the weight of them, in Gooden’s workspace. He manages to make his drawings speak for the animals, using their actions as their dialogue. The effect is incredibly well done, and shows a great respect for both his craft and his subject matter.

My biggest regret in getting my all-too brief look into this world is that I never got a look at volumes 1 & 2. I think that might be something I’ll have to remedy, because this fully realized world, created by Wassel & Gooden and published by Creative Mind Energy, is without a doubt a labor of love. It would deserve attention for no other reason than that. The rest is gravy.

Or icing, I guess.

Whatever, just get the book(s). 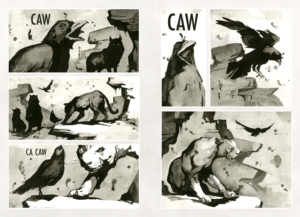 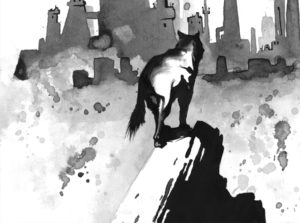