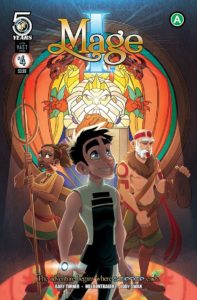 Welcome to the kingdom of Daravon, seat of the three deadliest traps in the known world. While Skirnir puts Zawa to test in order to retrieve a powerful weapon of legacy, Kai seeks to mend L’derOne. Along the way Kai comes to learn this safe-haven proves to be anything but.
———-

With a slick mix of sci fi and fantasy elements, with a touch of steampunk thrown in to really round out the genres, this title from Action Lab has a lot going on. Kai Xander’s family of scientists were orbiting what they thought was a “primitive” world when a very bad day happened. Now separated from everyone else, Kai finds himself stranded on the surface of that planet, and in some pretty strange company. The elder barbarian mage Skirnir is a rowdy, slightly left of center sort of mentor. Skirnir’s apprentice Zawa comes from nobility, and complains loudly to anyone in earshot when circumstances place her in situations beneath her station. Finally, the only remnant Kai has from his vessel, L’derOne is a loading dock robot believed by the inhabitants of this world to be a metal golem. Together they’re setting about to upset the status quo… cuz who’d want to read a book that left the status quo alone?

Issue 4 of I, Mage opens up with the start of a new story arc. While Kai is still coming to grips with his strange new surroundings, the damaged robot L’derOne his only piece of something familiar, the mage Skirnir gets some sad news. King Baldric, an old friend & former adventurer, has died, and Skirnir wants to travel to the kingdom of Daravon to pay his respects. The mage tells Kai that the King’s master tinkerer Vinr Quint resides in Daravon, and might be able to fix the damage to L’derOne. With everyone on the same page… maybe not everyone, but Zawa really complains a LOT so she pretty much sticks to her own page anyway… the group hits the road.

Upon arrival in Daravon, they’re all welcomed with open arms by the Viceroy, assured that all of their needs will be met… if only they could help out with one small thing. With the King’s passing leaving no heir, all that is needed to maintain the line of succession is the acquisition of the mighty warhammer & mantle of office for the kingdom of Daravon, Farrier Urthbreaker. The problem is that King Baldric’s warhammer is secured in an impenetrable vault, legendary for its deadly locks and accessible only by the King himself. It’s the Viceroy’s hope that, seeing as Skirnir helped devise the vault’s traps in the first place, he & and his apprentice Zawa would be able to bypass them to get to Urthbreaker… all for the good of the kingdom, of course. All seems totally on the up and up to me. How ’bout you?

So here we have every element of a great fantasy story. You’ve got your youthful hero-to-be on a quest to find his way home, his faithful robotic protector at his side. With him is the wise old mentor and the sassy, brash, yet loyal sorceress in training. There’s a kingdom in need of a ruler, and a Viceroy standing in until the opening can be filled. This story really could be any kid’s fantasy, and would make for some very cool storytime reading. The writing is aimed at the younger audience, labeled as appropriate for ages 8 and up by Action Lab, so older readers who don’t have kids to justify their immaturity might want to find a different title to pass the time. The artwork is bright and sharp, laying out a vivid new world that should satisfy fantasy lovers of any age, so long as they aren’t too jaded…

My overall take on I, Mage is that it’s a pretty upbeat title from Action Lab, great for kids looking for some adventure reading, and for parents looking for something to read along with them. 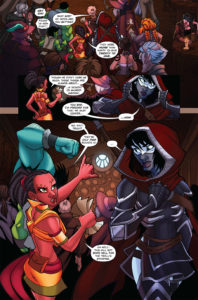 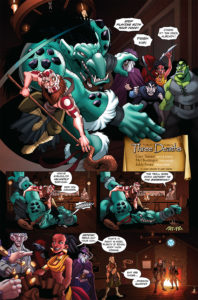 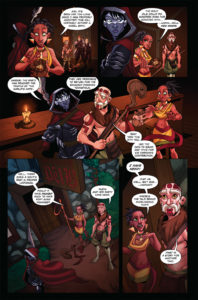 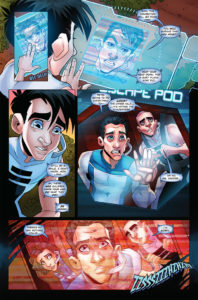 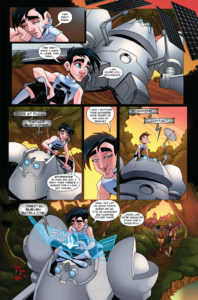 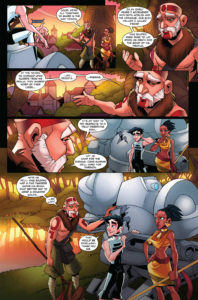