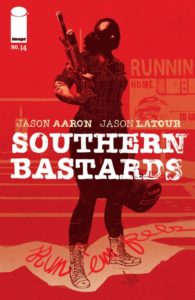 Southern Bastards was a discovery made by recommendation, and I’ve never regretted the read. It’s an uncompromising look at a southern town where the powerful are the law, and both racism and misogyny run rampant. Just when you think the person with some shred of decency will win the day, the tide turns and the status quo continues. Every month, I read and curse the creators for making me feel something for these horrible people, and feel something you will.

This issue shows the return of Earl Tubb’s daughter Roberta to her dad’s house to find out what happened and how he died. You don’t need to have read the previous thirteen issues to understand the story (but you should), so just jump in and make yourself at home.

Jason Aaron gives us a little background on just how unpleasant this Alabama town is, a little info on Roberta’s life up to this point, and her relationship with her parents. You get the feeling when the issue closes that Afghanistan was probably a lot easier than returning to her father’s house. Up until now, the book has mainly been about rugged men with an abundance of machismo, fueled by testosterone and beer. Roberta is an unknown element, tough as any man, and with daddy’s sense of justice. Every thought, every dialect-driven phrase, every curse word just deepens the saturation for who these people are and just how much the daily battle IS a battle for them. They don’t know a life where it isn’t a struggle every day, but you don’t ever completely lose hope. THAT is how Aaron sucks you in. Dammit.

Jason Latour’s art and colors fit in with Aaron’s words like sweet on tea. The people in this world have a beautiful ugliness to them, so much strength, and a multitude of expressions. The powerful sneer before the fight; a child gives a blank look just before getting a beating; a dog growls at the unfamiliar element in his territory. Normal scenes of everyday life have a muted palette, where panels of conflict are all in reds and oranges. If the words weren’t on the page you’d still understand these characters, but even the unmown yard, the messy kitchen, and the neighbor’s fence have an attitude. But when you get to the point where you find a character to support and see a line of grim triumph on that face, THAT is how Latour sucks you in. Double dammit.

You’ll be so glad that either this ISN’T your life, or that you’ve finally found a book that UNDERSTANDS your life, you won’t be able to look away. Oh, and the Jasons are fine with you cursing them every month, as long as you keep reading. 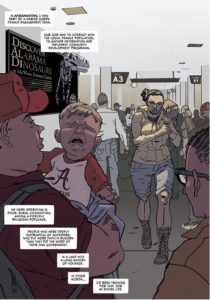 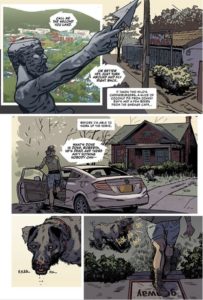 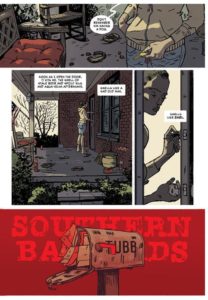