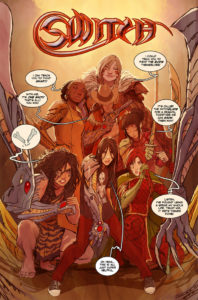 Mary finally learns what the Witchblade’s world is all about as she gets pulled to the other side where she has both friends and enemies…if only she know who was which!
———-

The story of the Witchblade isn’t new. I mean sure, it’s the immortal offspring of the Darkness and the Angelus, the aspects of Dark and Light respectively, and has been around for as long as there has been anything around to take notes. But in the common parlance, Witchblade was brought into existence in 1995, the creation of Marc Silvestri and David Wohl destined to become a flagship title for Top Cow. Written by Brian Haberlin and Christina Z, drawn by Michael Turner, to name a few, it’s the story of NYPD homicide detective Sara Pezzini. Through a twist of fate, Sara becomes the latest in a long line of bearers chosen by the Witchblade to act as the balance between Light and Dark. Always choosing women of exceptional quality, Sara Pezzini had proven her worth time and time again, faced threats of cosmic power, and maintained an often tenuous hold on her humanity.

However, Switch isn’t Sara’s story. While Sara Pezzini is a prominent character in the series… just not as a past bearer… here we get to see what Sara’s life could have been like if she’d not been chosen by the Witchblade, if she’d been allowed to carry on with her career and focussed on law enforcement without all of the added hassle of facing otherworldly threats. Just Earthly threats. Switch introduces us to a new, altogether bearer, sixteen year old Mary Parker. In her own estimation, Mary is by no means exceptional in any way, shape, or form. She certainly isn’t ready to take on beings of celestial might. So far, her biggest crisis is the giant pimple that popped up overnight, smack in the middle of her forehead. Mary likes sci fi and is convinced that aliens are not just “out there”, but are racking up the frequent flier miles visiting our humble blue planet.

The Witchblade disagrees, choosing Mary to be the one to carry the power and the burden in a moment of crisis. Targeted by both an agent of Darkness and Light, each looking to possess the Witchblade for their side in their eternal war, Mary finds herself caught up in events and in possession of the greatest weapon ever known. Mary’s also found herself hosting a little bit of a party in her skull, as past bearers begin making their presence felt. First is Uma, a cavewoman and the very first bearer. When the agent of the Darkness attacks, it’s Uma who steps forward to move Mary into battle and it’s Uma whose aggressive skills and brute strength save the day.

However, as this third issue of the series opens up, Mary is faced with a different kind of opponent when a servant of the Angelus shows up to pick up the fight. Against this enemy, Uma’s straightforward style is less than helpful. Enter Imani, who doesn’t so much move Mary in the battle as she subtly corrects and nudges her. Where Uma pushed Mary into the role of warrior, overriding her fear with ferocity, Imani takes the part of the teacher and replaces Mary’s fear with thoughtful determination.

When the fight is over, and Mary isn’t dead (sorry, spoiler), she’s brought by Imani to the “Crossing”, where the spirits of the Witchblade’s bearers end up when their time is over. It’s here that Mary starts to learn about both her role as a bearer, and the presence of every other bearer throughout history.

Switch isn’t a continuation of established Witchblade continuity, it’s a “reboot” of the mythology, reimagined and taking the place of the original series which published its final issue last year. If you don’t like the idea of a reboot, try thinking of it as an alternate timeline… there’s like a crapton of those in comic books and science fiction. If that little twist of phrasing gets you to run out and pick up this book, so be it. I’ve done my job.

This is a book very much deserving of attention, and on multiple levels. I had taken note of Sejic’s work a few years ago, running across some of his humorous sketches on Deviantart.com. Later on, I found that he’d been working on a few of Top Cow’s books, including Witchblade, Aphrodite IX, and Artifacts, and found myself a fully-fledged fan of his artwork. Then when I found out that he had creator owned titles in which he was handling the art and the writing, I was skeptical but picked them up anyway. I was an idiot. I won’t beat the poor dead horse any more than I have to, so I’m just going to say that Ravine, Death Vigil, and Sunstone are some of the best books I’ve read in years, and I’ve recommended them to several friends and have yet to get any negative feedback on them. Sejic isn’t just a skilled drawer of pretty pictures, he’s also one helluva writer, putting out some phenomenal stories, creating characters who present themselves as real people, flawed and whole. They have good days and bad, they get headaches, and apparently even pimples. Sadly, with the exception of Sunstone his creator owned works haven’t gotten the traction they deserve.

Which brings me full circle to the subject of this review, the much delayed Switch #3. After working through some medical problems, Sejic promises that he’s back to work and ready to redouble his efforts to put out a great book. I’m more than willing to take him at his word, because so far Switch has the makings of a fantastic series that can cross a few boundaries. Gone are the days of the Witchblade providing its bearer with an armor bikini. Mary’s only sixteen, for crying out loud, and deserving of more conservative handling than that. Mary’s also a pretty complex character in her own right, a status that Sara Pezzini did achieve, but after a much longer run and going through a few different writers.

My personal hope is that Stjepan Sejic can get some momentum going with the success of Switch, and can use that success to breathe some new life into Death Vigil, and finish Ravine’s story. It could totally happen… Joss Whedon took a failed television show (undeserved as that cancellation may have been) and got a greenlight for a high budget major motion picture that prompted some pretty high praise.

Stjepan Sejic has had some problems, mainly with his original works, but he’s still putting out some high quality work. Now, one of his originals (Sunstone) is hitting best sellers lists, and his star seems to be rising. He’s done, maybe not the impossible, but definitely the improbable… and that does make him mighty. 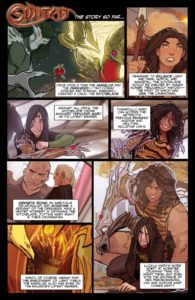 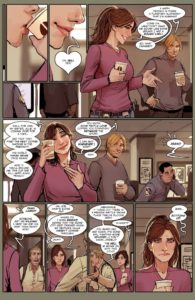 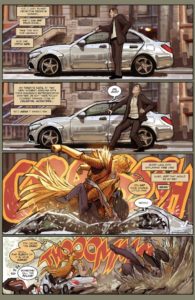