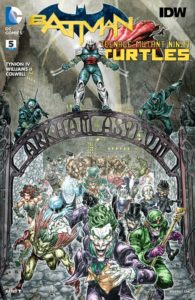 While Shredder enters an uneasy alliance with a deadly new partner, Casey Jones is arrested by the GCPD. At the same time, a crisis breaks out at Arkham Asylum, which is bound to keep both Batman and the Turtles busy. Meanwhile, a certain young resident of Wayne Manor returns home to find a new, green occupant in his room. Co-published with IDW.
———-

When two of the most ruthless minds combine, each bringing with him an army of assassins, all worlds tremble…

The Shredder, leader of the Foot Clan, has crossed dimensional barriers and finds himself in Gotham City. Of all the cities that he might have visited, it had to be Gotham, didn’t it? No other city would have made sense. In Gotham, the Foot are able to spread their proverbial wings and establish a new power base. Alliances have been made and consequently, because it’s Shredder, broken. Where at first Shredder’s ultimate goal was to re-open the dimensional door for his return home, he planned to maintain the doorway and become the master of two worlds.

Fortunately, the Foot weren’t the only ones to make the trans dimensional trip. Leonardo, Michelangelo, Raphael, Donatello, and Master Splinter have also found themselves in a strange new world. A world teeming with high profile villains of varying degrees of insanity, but also still a world with pizza. So, good and bad. The heroic mutagenic oddities have also found an ally in the form of the Batman. There may have been friction at first, however it soon became clear that they all had mutual enemies that had to be dealt with. And there’s a time crunch… the longer Splinter and the turtles stay in Batman’s world, the closer the mutagen in their genetic makeup comes to losing its hold in this reality. If Batman and his new allies can’t open a dimensional door, while at the same time preventing Shredder and his forces from using that door to take over both worlds, the turtles and their sensei will revert back to their natural states… just four ordinary turtles and a rat.

All of this sounds bad, but hang on… it does get worse. There’s another organizations of ruthless assassins, led by an equally ruthless mastermind who has come to Gotham to investigate rumors of ninjas in the streets. Ra’s al Ghul and his League of Assassins have entered the game and discovered the ingredients for a powerful alliance. All the Foot and the League need is a base of operations from which to establish their dimensional gateway, a place easily fortified and defended, from which they can strike out against anyone who would stand against them.

I don’t even know where to start. In many cases, crossover events like this come across like forced publicity stunts that serve no real purpose but to combine a couple high profile titles and sell some comics. This crossover may be a publicity stunt to sell books, but it makes perfect sense, and it works well. James Tynion doesn’t take the easy road and stick with gimmicky dialogue or clichéd character tropes. He takes the source material (more or less) seriously, giving all of the source material the respect it deserves. Face it, as off the wall as a concept of four mutated turtles who have reached human sized proportions and become martial arts masters might be, the turtles have been around for a while and don’t show any signs of going away.

Given two pretty rabid fan bases, and the understanding that people are going to read this book regardless of how bad it might be, the most difficult part would probably be in fitting the two groups of characters together in a way that suits everyone involved. Tynion handles this pretty well. Let’s face it, talking turtles isn’t the strangest thing Batman’s run across, but he would still need some kind of common ground to make any kind of relationship work. Tapping into the mutual love of martial arts brings everyone together, first in the inevitable first meeting fight between the Dark Knight and the Ninja Turtles, and later on in a spirited sparring match between Batman and Leo. There’s also some bonding over shared pizza…

Other characters might not have as easy a time… Commissioner Gordon finds himself looking forward to retirement as events in Gotham take a turn for the stranger. The Penguin, Shredder’s first contact in this new world, has a tough time grasping how he loses control of his situation so quickly, particularly to a guy dressed like a walking cheese grater. Damien Wayne just wants to know who the hell these intruders into his domain are, and why they’ve been messing with his video games.

Of all the supporting cast, the most out of place person is Casey Jones, who just seemed to show up through yet another dimensional portal. His only real plot point seemed to be that he was sent through the portal to tell them that the mutagen in their systems would burn out in this dimension, and to bring them back up mutagen to prevent being returned to their natural states. Unfortunately, Casey had been intercepted by Shredder and his people, and his mutagen was taken.

Deus ex machina aside, there’s an amazing amount of awesome going on… To be honest, I’m not particularly happy that this is the second to last issue in the crossover. Tynion’s writing is entertaining, doing a great job of balancing out Batman’s “dark and broody” with Michelangelo’s goofball antics, without taking it too far over the top. Splinter is the ever teaching sensei, giving out bits of wisdom as needed, regardless of who needs it, and Batman is the perpetual student of the martial arts who recognizes the wisdom in paying attention. Damien/Robin, on the other hand, is kind of an arrogant little jerk, so spot on character work there.

None of the fanboy rewards to found in this book would amount to beans if it wasn’t for Freddie Williams’s artwork. He’s managed to capture the classic style of the Turtles, and brings us a pretty imposing Batman. The action, and there’s a lot of action here, is dynamic and rendered with loving detail, particularly in the martial arts movements (one of my favorite moments in this issue is in the perfectly conveyed wrist control as Robin executes a pretty brutal takedown on Mikey). I’m actually looking forward to seeing more of his work once the action gets carried into Arkham Asylum.

I think I’ve rambled on long enough. If you’re a fan of either the Turtles or the Dark Knight (and why would you be here if you weren’t?), you’ve hopefully already been reading this mini-series crossover. If you haven’t found it in your heart or budget to give it a look, I’m here to tell you that you are missing out on some good stuff. Do whatever you have to do… open you mind to the possibilities, donate some blood plasma… and check it out. If you’re not into single issues, the good news is that with the final issue of the run coming up next month, it shouldn’t be too long before the trade paperback hits your local shop. 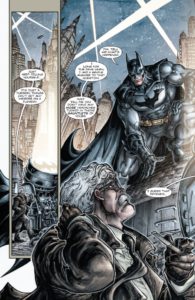 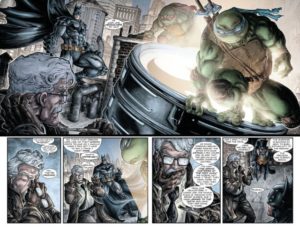 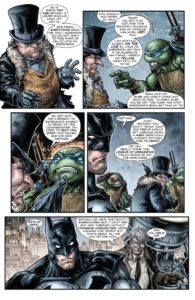