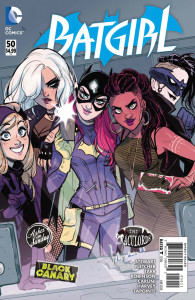 New 52 Batgirl has been wildly popular with a lot of new readers, and mixed with readers who have been with her for a while. Removing some outdated continuity (she was never a librarian, or a congresswoman, Dick Grayson is older, and she was only in a wheelchair for 2-3 years) and adding in some youthful foibles (selfies anyone?) made Batgirl more relatable and more like a real girl to a new generation of readers.

This issue wraps up a story line where our Babs has been very unlike herself – she’s been forgetful, which someone with an eidetic memory (some things DON’T change) should never be. She’s also allowing a house guest to go through her things, and he’s not even someone she really knows. At the end of the last issue, we found out that the Fugue has been messing with her head, and through some computer-related magic she was able to reboot to a version not being controlled by him. Now, much like Jessica Jones shaking off the Purple Man, she’s going to take on her nemesis with a little help from her friends.

Stewart and Fletcher do not let us down with a chase around Burnside, a memory lane trip of the villains from the last couple of years. Pithy points are made and teamwork is highlighted, and the good guys win without too many terrible things happening. There are still two issues left before Rebirth, so wondering what they have left to cover. For all the debate, I think Barbara is still essentially the girl we’ve believed in our whole lives.

With all the art talent on this issue, you’d think it would be a mishmash of styles and line weights, but it really does work as one big crazy quilt of awesome. There are some real differences from one part of the story to the next, but no one stands out. Believe me, this is a VERY GOOD THING. The three colorists seemed to have used all the same or very similar bright pallets to sew all the pieces together, with the same letters across the board cementing the story.

I have hopes for the future of Batgirl, but this was definitely a rich chapter.  I liked this version of Barbara Gordon.  For me, she’s earned the right to be remembered when we talk about Batgirl. 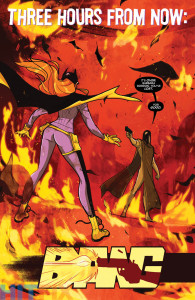 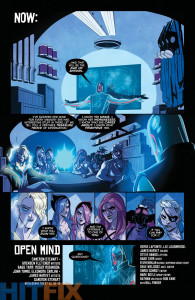