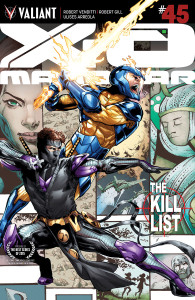 The leader of the Vine insurgency has turned the tables on X-O Manowar and Ninjak in a way they never saw coming! By safeguarding a nation of alien refugees on his own sovereign soil, has Aric unwittingly invited a Trojan horse into his kingdom? And just when everything seems darkest…the Armorines return with a surprising new mission…
———-

XO Manowar, one of Valiant’s flagship titles, has been going strong for longer than many of its readers might realize. Created by Jim Shooter, artist Bob Layton, and Jon Hartz back in 1992, Aric of Dacia has been a mainstay. Abducted and enslaved, along with his fellow Visigoths, by the aliens known as the Vine, taken into space against their will, Aric and his people never knew peace or freedom. Finally, the day came that Aric bonded with the sentient Manowar armor, the most sacred artifact of the Vine. On that day, Aric and his people freed themselves from their captors and returned to Earth… only to find that centuries had passed.

After much conflict, the Visigoths have finally settled into a place they can call home. What’s more, a truce has been made between humans and the Vine remaining on Earth. The peace isn’t always an easy one, and it isn’t mutually agreed upon. The Vine Commander Trill, thought to have been killed in battle against Aric, has returned with a vengeance. He plans to undermine the authority of the Vine High Priest, who is in favor of the existing truce, and to take Earth as a new home world for the Vine. The fact that the planet is already occupied (by us) is a detail he would like nothing better than to see rectified.

On a mission to interrupt Trill’s plans, Aric of Dacia and the MI:6 operative Ninjak are enroute to Trill’s base in Portugal. What they find when they get there is more than a little disturbing, and demonstrates some pretty impressive levels of dedication and spite.

The Valiant universe has always been one that embraces both the fantastic nature of what’s great in all comic book genres, and how those out of this world situations might be handled in the “real world”. Instead of just presenting works of incredible science fiction into their world as accepted fact, they’ve gone the extra mile and considered how things like aliens and superheroes would affect our societies, with a more realistic eye to “cause and effect”. So it is that concepts of displaced refugees, religious zealotry, and militaristic extremism are dissected and presented in a disturbingly real conflict.

It might sound like an absurd idea, but there can’t be any doubt that Valiant’s successes have been stacked high as they’ve counted coupe on the competition. That’s not to say that everything is all doom and gloom… Far from it. As in real life, the characters of the Valiant universe are diverse and unique, and represent a wide range of personality types. Case in point: the deadly British assassin Ninjak, speeding toward the coming battle aboard his self-named “Ninjet”.

Seriously, it’s the “Ninjet”. Dude, if I were a deadly ninja assassin and had my own jet, what do you think I’d call it?

If you’re new to XO-Manowar, keep in mind that this is part three of the current story arc, so you could probably do some backtracking before jumping into the story. And if you haven’t checked out any of Valiant’s titles, you could do a lot worse than this layered sci fi action series. 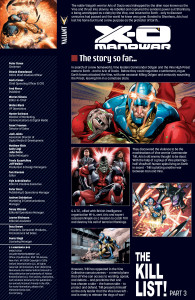 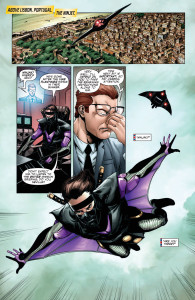 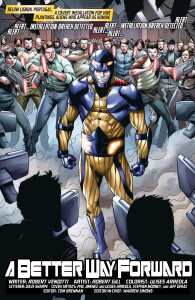 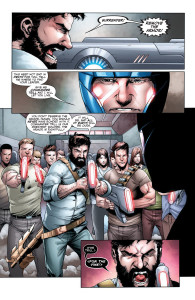 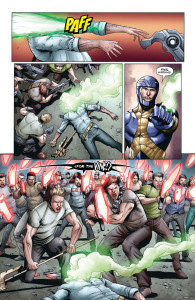 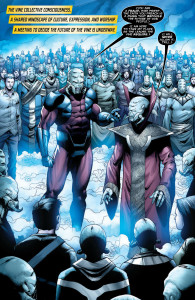 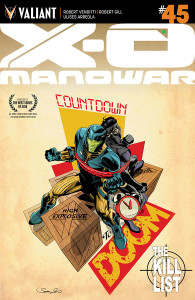 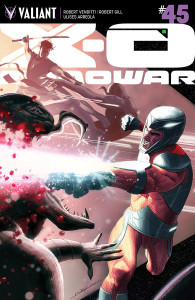