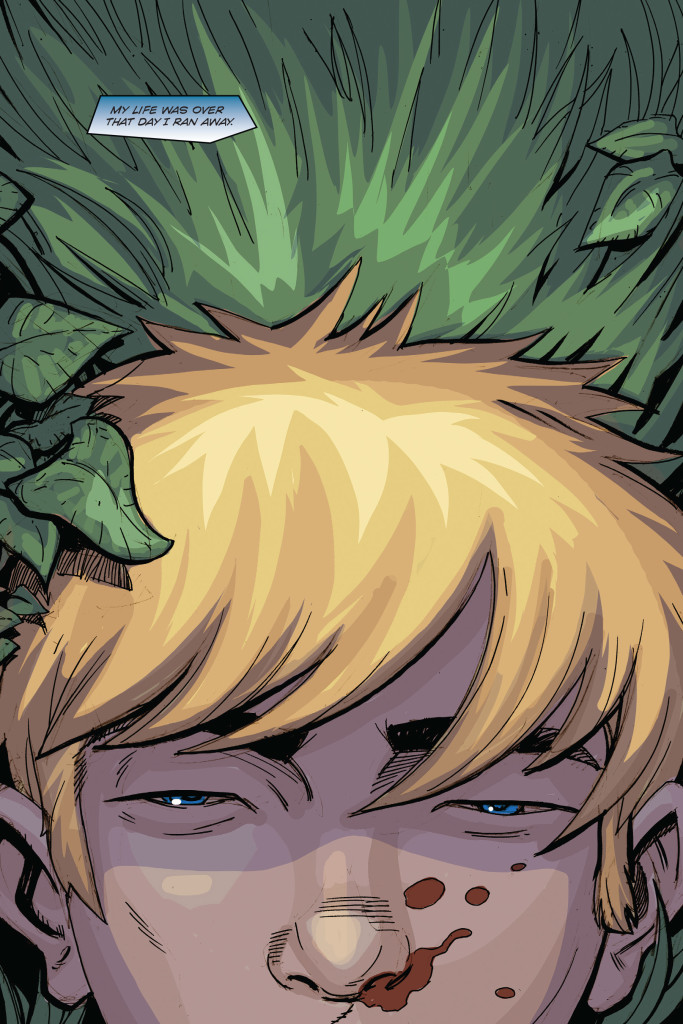 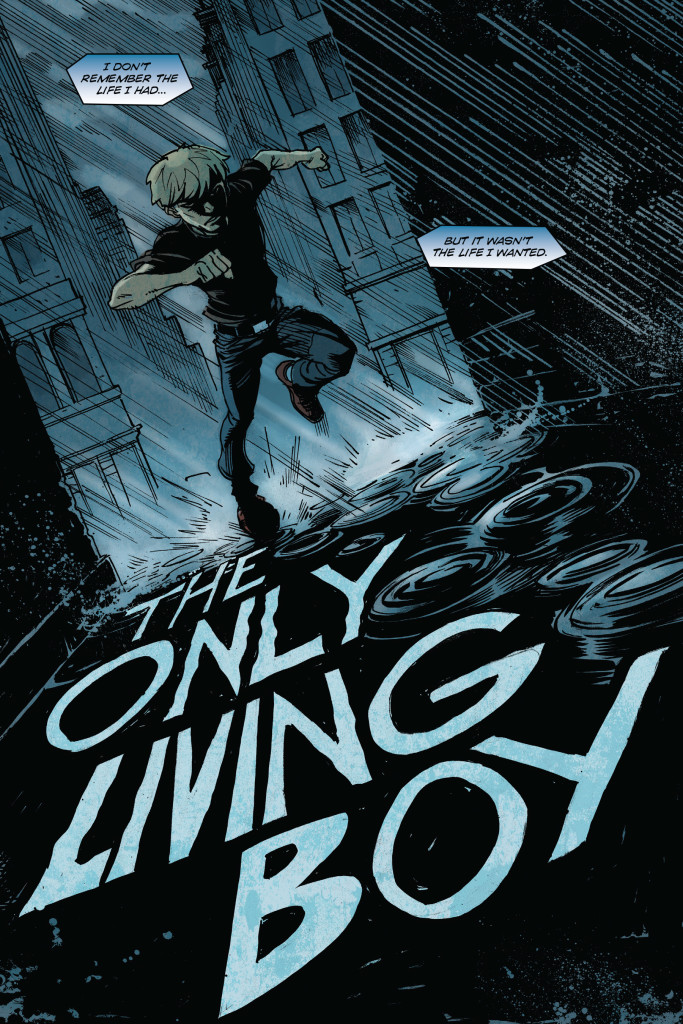 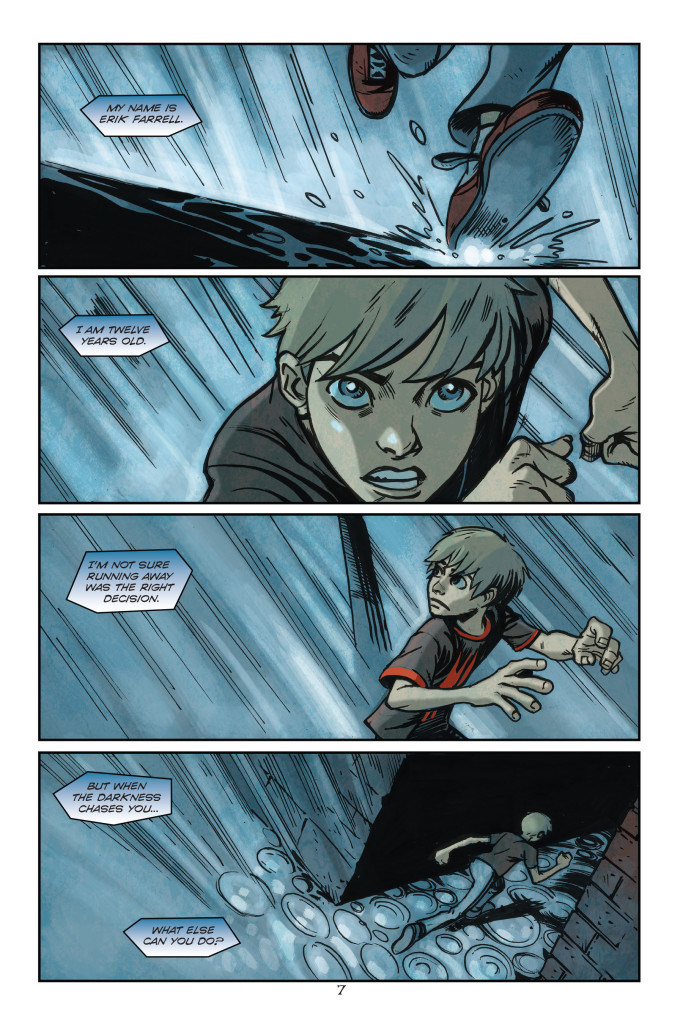 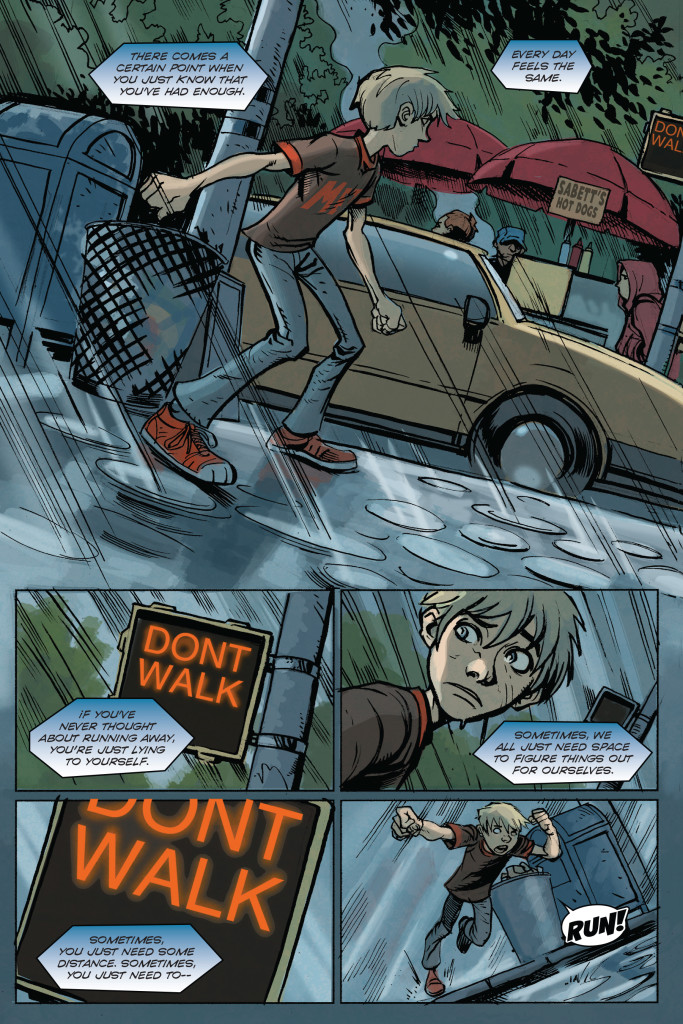 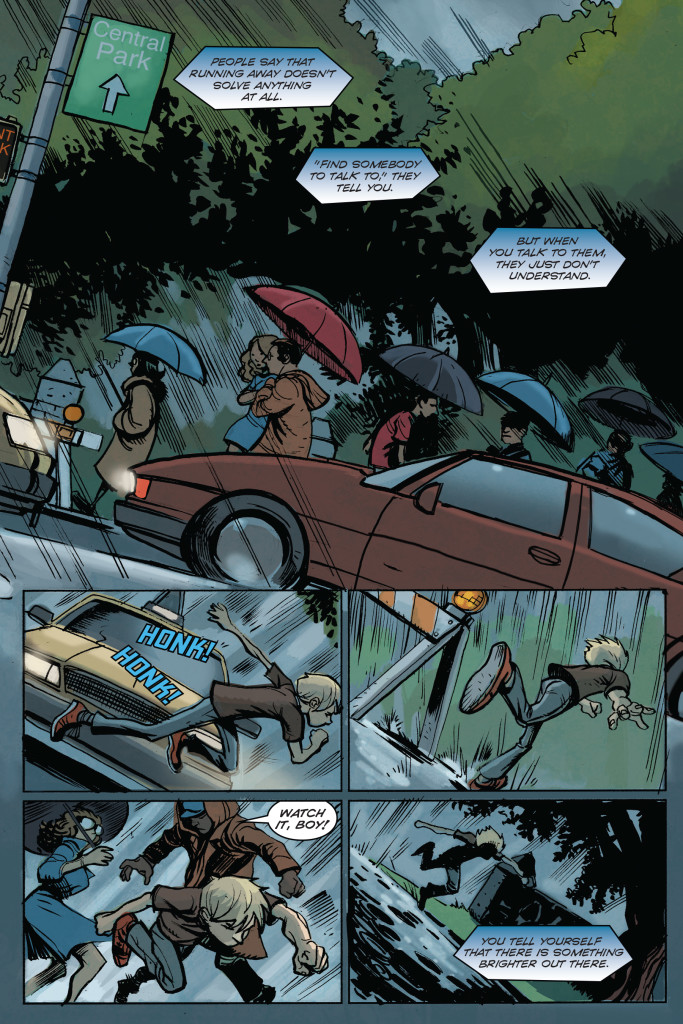 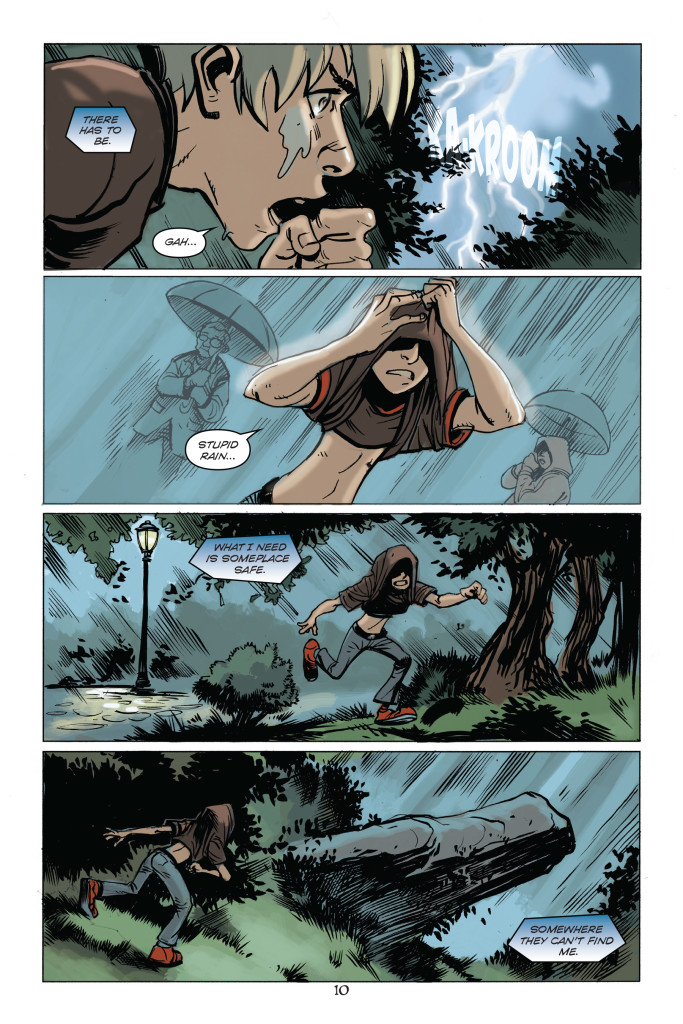 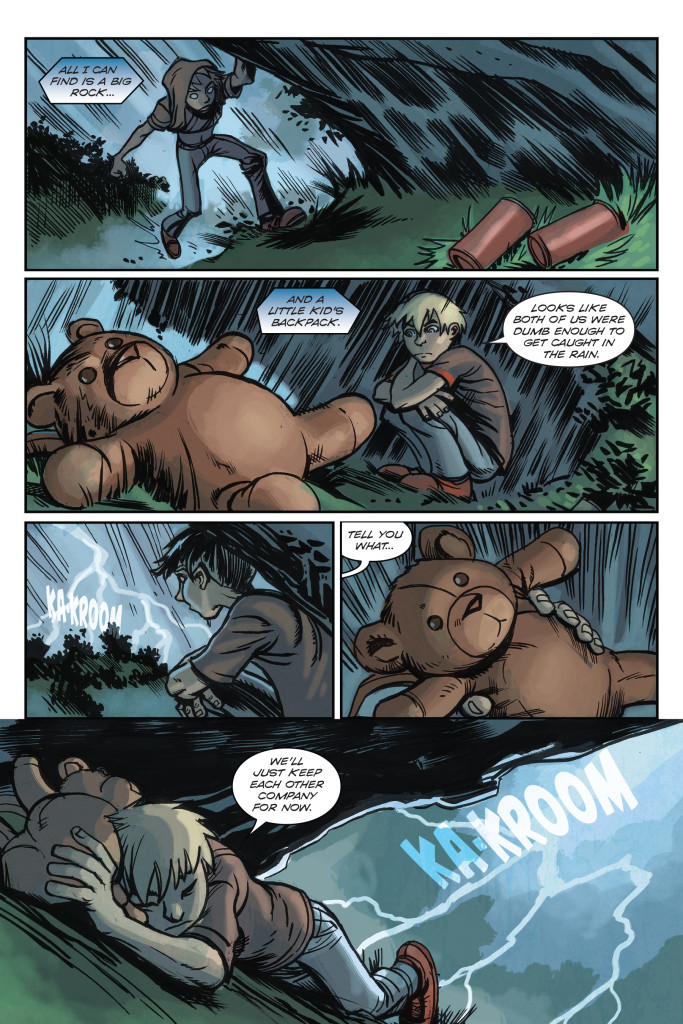 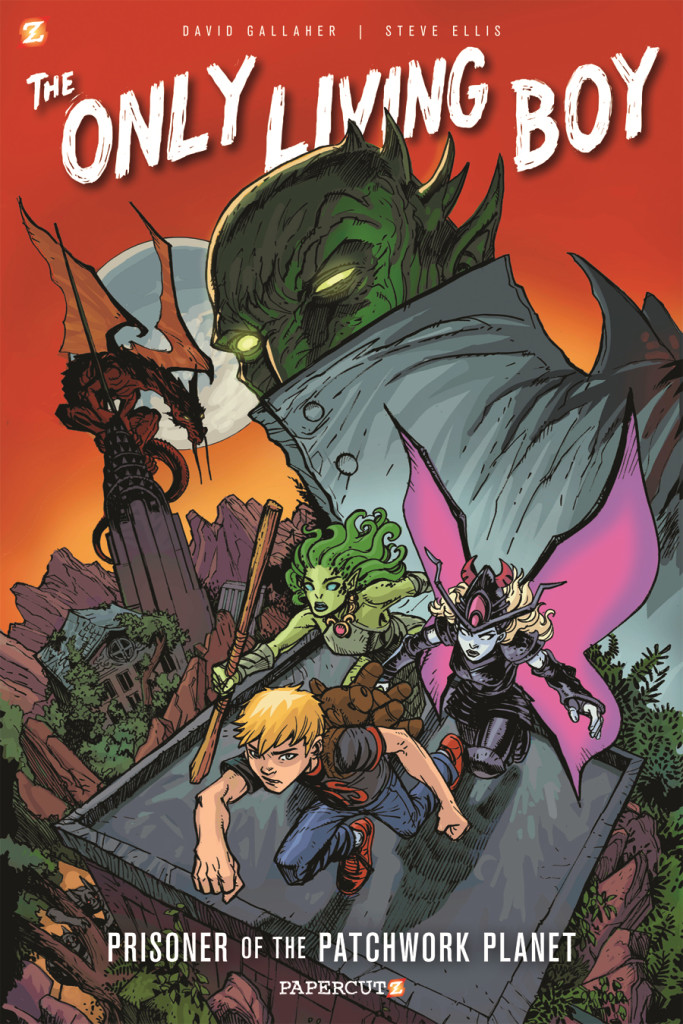 Inspired by classic pulp novels, old-time radio broadcasts and Saturday morning cartoons, the first volume of Harvey Award Winning Creators David Gallaher and Steve Ellis’ acclaimed adventure series THE ONLY LIVING BOY is available for the first time in bookstores. The series presents the adventures of Erik Farrell, a runaway boy who awakens on a strange planet to discover he just might be the last human alive. Erik must befriend an insect princess and a mermaid warrior in order to defeat an evil dragon and a slew of dangerous creatures. Eight years in the making, THE ONLY LIVING BOY: PRISONER OF THE PATCHWORK PLANET will be published by Papercutz on March 8, followed by Volume 2 in July, Volume 3 in October, with more volumes to follow in 2017.

Beyond his collaborations with Gallaher and his work as the Creative Director for Bottled Lightning, Inc., Steve Ellis is perhaps best known for his artwork for Wizards of the Coasts on Dungeons and Dragons and Magic the Gathering and for creating storyboard designs and final art for interactive comic role playing games for AMC TV’s Breaking Bad, Better Call Saul and The Walking Dead. “One of the things I’ve noticed, both as a creator and as father, is that there are few graphic novels that bridge the gap between childhood and adulthood,” said artist Steve Ellis. “THE ONLY BOY is an action packed fantasy, but it’s an emotionally complex one that’s as much about loss and struggle as it is about adventure and triumph.”

In addition to his work as Chief Creative Officer for Bottled Lightning Inc., Gallaher has written for Marvel Comics, The New York City Police Department, and McGraw-Hill and served as an editor on Attack on Titan, Fairy Tail and Sailor Moon for Kodansha,. For five years shortly after college, he taught in the Maryland Public School System as a special education teacher.

“My experiences as an educator informs so much of THE ONLY LIVING BOY,” said Gallaher. “Growing up can often feel lonely and isolating. As teacher, I saw firsthand how anxiety can haunt children. With this series, I’m exploring how children adapt to adversity. Readers might gravitate to this story because of the exotic and dangerous creatures, but the story will resonate because the characters grapple with issues that kids relate to, like intolerance, self-confidence, and feeling like the odd one out.

Gallaher’s experiences as a teacher informs not only his creative process, but also how he and Steve Ellis interact with THE ONLY LIVING BOY’s growing fanbase. Instead of participating in traditional bookstore readings to support the print publication of THE ONLY LIVING BOY, the duo will be conducting #makecomics workshops for their young fans and aspiring creators. Participants will receive helpful, honest advice about project planning, publishing, funding, and navigating the comic industry. Workshops will be held at the following locations:

“Our goal with THE ONLY LIVING BOY is to create amazing adventure comics that are inspired by the past, but look to the future,” said David Gallaher. “We look forward to meeting with our readers and aspiring creators,  helping to guide a new generation of writers and artists.”

“We’re delighted to be publishing THE ONLY LIVING BOY in graphic novel format for the first time,” enthused Papercutz publisher Terry Nantier. “It gives existing fans a chance to have a more permanent version of the series they love and also exposes Erik’s adventures to a brand new audience. I’m sure they’ll fall in love with Steve’s gorgeous artwork and David’s compelling storytelling, just like I did!”