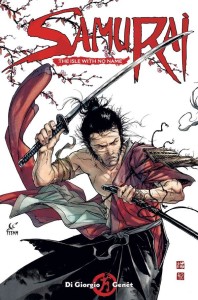 Samurai: The Isle With No Name #1
Titan Comics
Written by Jean-Francois DiGiorgio
Art by Frederic Genet
Colors by Delphine Rieu

Takeo is a brave young Samurai fresh from his triumph in the battle to save Imperial Japan from the treacherous General Akuma.

With much still to prove, he has turned his back on a life of comfort and set out on a quest to try and discover the hidden truth about his family, and the symbolic tattoo that he bears…

With only his sword, which once drawn cannot be sheathed until blood is spilled, he travels to the mysterious Isle with No Name, seeking his missing brother and the answers that will finally bring him peace…
———-

Takeo arrives on the Island with No Name just in time for the annual “celebration”, which is no real celebration. Despite the spectacle, pomp, and circumstance, there’s nothing good about the yearly visit from Lord Nobunaga and his retinue. This year is different only by degrees of “bad”, as the money set aside for the village’s tithe was foolishly spent in an attempt to preemptively attack and kill Nobunaga’s champion. Without his samurai at his side, the village could rid themselves of the yearly visit that keeps them on the edge of poverty and extinction.

But Nobunaga hasn’t brought just any samurai with him this year. His champion is legendary swordsman Shobei, a master of the blade who has yet to meet his match. Shobei easily takes out the men sent to kill him, and Nobunaga’s arrival on the Island with No Name goes according to schedule. With no tithe to pay off their Yakuza oppressors, and no champion to face Shobei in a duel, the people would appear to be stuck in a tough fix.

Young Takeo and the veteran Shobei meet, a chance encounter in which both men express admiration for each other’s technique. Takeo even reveals that he was taught by Sensei Kaze, a man known and respected by Shobei as they had studied at the same dojo. Without a doubt, Takeo and Shobei are destined to clash, and with this lead in that duel should be epic.

If this book were a movie, directed by the great Akira Kurosawa and starring a young Toshiro Mifune as Takeo, it couldn’t have been more authentic addition to the genre of “Samurai Epic”. It has all of the elements: The young masterless samurai on a journey of discovery, looking for his lost brother Akio; the grizzled samurai, veteran of countless battles who’s greatest desire is to die in battle so that he can be reunited with the spirits of his wife and daughter; the greedy and ruthless Yakuza overlord, wringing every bit of wealth he can out of a defenseless village, regardless of the consequences to the people.

Samurai: The Isle With No Name is the perfect storm of comic books. It tells an epic story of honor and bravery, greed and cowardice. Jean-Francois DiGiorgio has created a fully realized world, populated with characters who manage to convey fully realized personalities, even when they’re only on the page for the proverbial eye-blink. And those characters inhabit a world beautifully rendered by Frederic Genet & Delphine Rieu, with enough detail for the most jaded critic.

You know, now that I’m thinking about it, Toshiro Mifune would have been perfectly cast as the older Shobei, just as easily as the younger Takeo. In my mind, this movie is already being made… I just need a soundtrack. 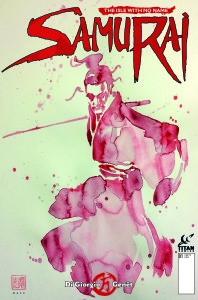 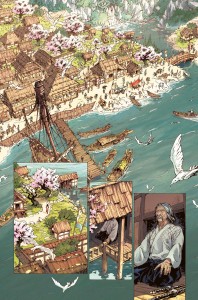 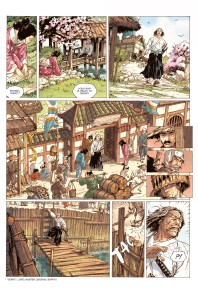 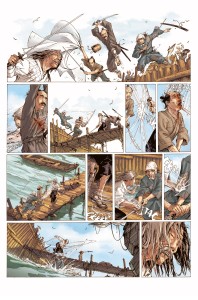 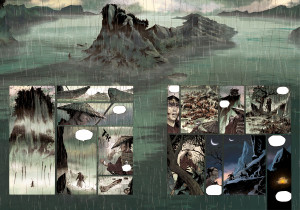