We are now a few weeks out of C2E2 2016 and I’m still reeling from the level of awesomeness.

Definitely one of the high points of the weekend was the time I got to spend with Sandy King Carpenter, of Storm King Productions. If you’re not sure who that is, let me hit you with some knowledge. She’s been involved in producing movies like Sixteen Candles, Rumble Fish, and the cult movie classic They Live. She started as a script supervisor and real life scream queen, and became a legendary producer, writer, and now comic book author/publisher. I got the opportunity to spend some time with her at C2E2 to chat about her mission to make quality comics and graphic novels. 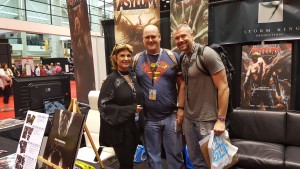 B: Hey Sandy! Thanks for taking the time to talk with us today

SKC: Thank you from coming to talk to us. Are you enjoying the show?

TPB: Oh yeah! I love how C2E2 keeps their focus on comics and graphic novels. It’s a great opportunity for people to see great talent from small press and independent publishers.

SKC: It is a great venue for that.

TPB: Your company, Storm King Productions, currently has two products Tales for a HalloweenNight Vol. 1 and Asylum. What made you want to tell these stories in the comic book medium, rather than film?

SKC:  Comics are an everyman art form. They have a wide range of appeal for many people, and that appeal is spreading as comics grow in the American cultural consciousness.

SKC: Yes, and it really comes down to the process. In Hollywood there is a ton of frustration involved in the creative process and roadblocks to getting a movie/TV show made, and I wanted to avoid all of that. Not that printing comics doesn’t have issues. I’ve been very lucky to work with great comic talent like Bruce Jones. He was able to teach me a lot about this type of creative process. Plus, we are able to take creative risks in comics that we can’t take in film. We’re able to try some things and produce a smaller print run rather than produce a big film and hope people get it. 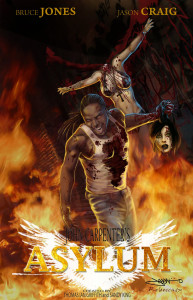 TPB: Awesome! So in Asylum, your main character is a former priest that can see true evil and deals very much with the war between Heaven and Hell. Where did those concepts come from?

SKC: We went straight to the source, the book of Revelation in the Bible! Thomas Ian Griffith and I took many concepts from Judeo-Christian beliefs and made a kind of Jekyll and Hyde story. Our character not only recognizes true evil, but can take it into him and dissolve it. The downside is that while the evil is inside him, he becomes that demon/evil.

TPB: The concept alone is creepy enough, and Storm King is able to attract artists that can create some truly terrifying imagery (and I mean that in the best way possible).

SKC: Yes, thank you! That means we’re doing our jobs.  You are right. When I set out to make comics, I wanted to make sure that our comics are as pretty on the inside as they are on the outside. Too often people are buying comics were the cover looks great, but the inside art is shit. Or as they are reading a comic, the ink is rubbing off on their fingers. Our bottom line is that we are here to make good comics.

TPB: Let’s talk about Tales for a HalloweeNight quick. It reminds me of the Creepshow movies in that it’s an anthology of scary stories. You have released Vol. 1, what’s next?

SKC: We get the comparison to the Creepshow movies, and most recently Trick or Treat, but the reality is they are both anthologies of scary stories. Parallels can be drawn, but we are our own thing. I really think this is really a great book! We recently got the Book of the Year award from the INDIEFAB Awards. Volume two is currently in works, and barring any disasters, it will be ready for next Halloween.

TPB: Fantastic! Thank you so much for taking the time to talk with us today.

SKC: Thank you for stopping by. Enjoy the rest of the show.