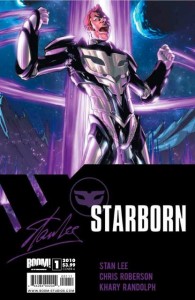 Benjamin Warner dreams of being a successful sci-fi novelist, but so far he’s stuck in a dead-end desk job with nothing but an overactive imagination. Then Tara Takamoto, the girl of Benjamin’s dreams who he’s loved since childhood, unexpectedly reenters his life. And with her come aspects of his fantasy life, suddenly all too real… and all too deadly. When Tara reveals herself to be a shape-shifting martial artist from another world, and the only thing standing between him and an army of killer beastmen, Benjamin thinks that maybe his dead-end desk job wasn’t so bad after all…

Specially priced at $9.99! Stan Lee, the most colossal force in the history of comics, teams up with critically acclaimed writer Chris Roberson (SUPERMAN, iZOMBIE) and artist Khary Randolph (SPIDER-MAN) for the action-packed, sci-fi superhero scorcher, STARBORN! Compiling the jaw-dropping first arc, down on his luck fantasy writer Benjamin Warner learns that he is the heir to an alien throne and soon finds himself in the middle of a galactic war, forced to face the truth that he is…not of this world! This can’t-miss volume features a cover by fan-favorite artist, Humberto Ramos!
———-

Everyone has those itches at the back of their mind… The question, “what if I was someone else?” In our daily lives, we think that our “normal” is soooo boring, we think we’d really like to be less ordinary. But think about it. Would we really like our lives to be so interesting? On average, people aren’t really equipped to live the kinds of lives we make up and play out in our heads. I’m not talking about sky diving, or rock climbing. I’m talking about being on the run from a coalition of intergalactic insurgents who all want you dead because you’re the last surviving member of a tyrannical bloodline.

Ooooh, interesting doesn’t sound so cool, does it?

This is the sort of major life change that Benjamin Warner is faced with. Since he was kid, he’d concocted fantastic stories about adventures in space, on alien worlds, battling against alien monsters. As he grew older, he became convinced that he could take those worlds and monsters and craft a best-selling novel. The great Human Civilization, spanning countless worlds and overseeing multiple species: The race of artificial constructs of the Network; the warrior-born beastmen of the Pride; the mystical Witches of Arbor.

Ben’s first real disappointment was received in a rejection letter. His novel wasn’t publishable because of all the similarities it bore to an already published work, from an author he’d never heard of and never read. When he dug up some info on this other book, he found that it didn’t just hold a few “similarities” to the stories he’d been dreaming up since childhood. It was all about life in the Human Civilization, complete with all of the races he’d believed were products of his active imagination. What’s more, the book was written long before he’d been old enough to dream them up, much less put them to paper.

Enter childhood friend, the subject of Ben’s lifelong crush, Tara. She arrives on the scene just in time to save Ben from an attacking horde of hive-minded human mutants… again, right out of Ben’s imaginings. Before his eyes, Tara transforms from the aloof girl he’s always known into an ass-kicking martial arts goddess, a member of the Crimson Hand… you guessed it, yet another item seemingly plucked from his brain and brought to terrifying life.

By now, you should be starting to get the picture… Benjamin Warner is, in truth, Bin Yaamin, heir to the House of Bin and last surviving member of the royal family. The alien beings determined to put an end to him? All of the insurgents who’d assembled to put an end to the oppressive rule of Ben’s father, Bin Ydict. In the spirit of movies like The Last Starfighter and books such as Simon R. Green’s Deathstalker Saga, Starborn is a put your problems on the back burner, sit back and relax with a book that’s fun to read.

This fast-paced space opera from the ever-fertile mind of Stan Lee, scripted by Chris Roberson and penciled by Khary Randolph (with some impressive covers by Humberto Ramos) is a great piece of science fiction adventure. So far, I’ve read the first six issues from Boom’s twelve issue arc, and I’m hungry for more. Released back in early 2011, I thought it only fitting as an entry for Throwback Thursday. My only regret in reading is that once I’m done with the long since released issues of Starborn, that’s gonna be it. I’m not worried about a resolution to the story, though… One thing I’ve learned is that Boom! Studios has mastered the art of the limited story run, and with Starborn I’ve found (belatedly, sure) a favorite that I plan on tracking down in print form and reading again.

Check it out… Have I steered you wrong yet? Okay, that one time, maybe… but that was a total misunderstanding. 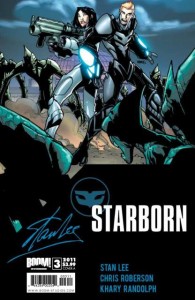 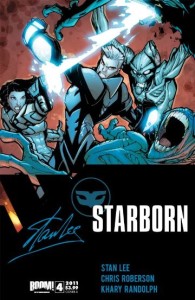 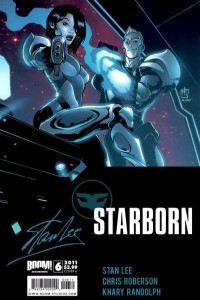