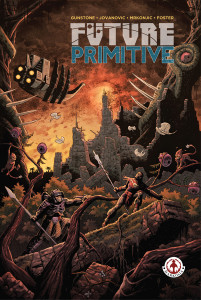 On an Earth transformed by supernova radiation, Kulkan, last warrior king of the mutant Neanderthal “Skybearers”, faces devastation at the hands of the rampaging Australopith “Moon Clan”. A lunar apparition has fuelled the Clanês bloodlust, but the scientifically advanced Skybearers realize they are witnessing the first sign of the mutating supernovaês resultant shockwave – a devastating force_set to obliterate the world it once transformed. Set in an age outside of time, FUTURE PRIMITIVE is a spectacular, dynamic, and hallucinatory stonepunk adventure that follows Kulkan as he battles for the survival of his civilization and to preserve their “Memory of Being” – the sacred cave images relaying Skybearer history and myths – and in which he will find a clue.
———-

“Welcome, Seeker. In Lak’ech ala K’in.

“These hieroglyphs and their stories represent the last testament of the Skybearers: the hybrid Neanderthal race spawned to uphold the sky.”

With this opening, there should be some indication that Future Primitive is going to go a little deeper than the average sci fi or fantasy graphic novel. As detailed in a forward, written by the fictitious Professor Dennis H. Denisovan of the Pangean Bright Helm University, the story is taken from recently unearthed “memory fragments”. The newly recovered artifacts detail the days of the Neanderthal tribe called the “Skybearers”, and their ruler, King Kulkan.

Okay, sure, there’s a lot going on here. The first premise I had to wrap my head around was on the basis that the tribes featured, both the Neanderthal Skybearers and their mortal enemies the Australopiths of the Moon Clan, refer to themselves as Neanderthals and Australopiths. The next was that, regardless of their relatively unevolved nature, the Skybearers utilized advanced technology given to them by their sun god, K’in. Once all of that was squared away in my brain pan, I was left able to enjoy an entertaining story that hovers in between the realms of science fiction and fantasy.

That story starts out with a pack of Moon Clan primitives attacking, killing, and then eating a “sky god” (I read that as “alien”). This brutal act gifted these individuals with the powers and intellect of their victim, and gave them the gumption to take on their more advanced rivals, the Skybearers. These attacks begin in Southern Tolan, hunting lands of Kulkan and his people.

The narrative of the story is broken up into sections by pages of quasi-historical text, giving the history of K’in the sun god revered by the Skybearers, and Chodesh the moon mother of the Moon Clan. These history lessons run parallel to the main story, so you’ve got to pay attention. Coming in at around 120 pages, Future Primitive is a lengthy read to tackle, on top of the various concepts jumping back and forth between myth and fact. Like I said, there’s a lot to take in here.

The writing is solid, with very well thought out concepts. The idea that what we’re reading is actually a manuscript derived from historical artifacts, restored, translated and presented by artisans of the Neanderthal and Troglodyte races is interesting and pretty original. The whole concept would present some interesting dilemmas in the art department, and for the most part they are turned neatly into opportunities as the world is presented in full color. At times the character designs might be a little tough to differentiate, but that should be excused without too much angst. Just keep in mind that from an artist’s standpoint, there are only so many ways to present a caveman. Even a caveman flying a skyship…

If it’s something different you’re looking for, I think I’d have to say that the adventures of a clan of highly advanced Neanderthals locked in a struggle for dominance against a savage and fanatical enemy, Future Primitive would have to qualify. 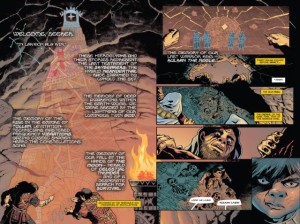 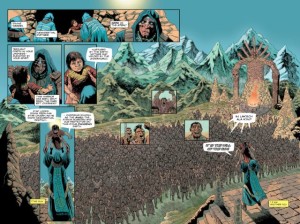