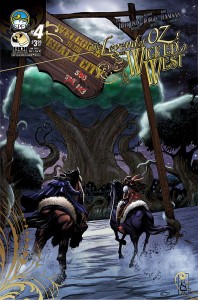 Take a trip back over the rainbow to an Oz you never knew existed! Dorothy Gale and her newfound friends have a new foe on their heels…and it isn’t the Wicked Witch of the West!Featuring re-mastered content, creator commentary and whole lot more, don’t miss out on the newest BDI launch, LEGEND OF OZ: THE WICKED WEST!
———-

The Witch of the West is out for blood… Gale’s blood. To get it, she sends out a swarm of killer bees to bring the Kansas native and her friends down. With the swarm bearing down, Gale, the Tin Man, Scarecrow, and the Lion, things are looking pretty grim. After some quick thinking, Scarecrow sacrifices herself to protect her friends, scattering her innards in a covering to keep them safe. Not bad for someone without a brain. Now, with some room to move and swing his axe, Tin Man sets to work clearing the swarm.

When that’s dealt with, a crisis is replaced by a mystery as a pair of flying monkeys come crashing to the earth. Dead on impact, they’re covered in bee stings… which brings up the question, if the monkeys are working for the Witch of the West, why would she send a swarm of killer bees to take out not only Gale and her friends but also her own minions?

The Wizard of Oz is probably one of the most recognized and retold stories ever concocted. If you’re paying attention, it’s served as the inspiration for many stories, movies, and books. Some have been decent, some have been cheap bastardizations attempting to cash in on the name. What the creative team of Tom Hutchison and Alisson Borges have done is taken the base story, and dialed the clock back a bit. Instead of Dorothy being whisked away from Depression era Kansas, we have Gale, a bonafide cowgirl out of the Old West.

It’s an interesting spin, with Gale being a little more of a go-getter and better equipped to take care of herself than Dorothy was. Decked out for a ride across the prairie, her cowboy hat atop her head and her six-guns at her hips, Gale does a little more than whine about her predicament as she leans heavily on the friends she finds over the rainbow. Seriously, I never understood why they hung around long enough to even get to Oz, with all that crying and that little mutt yapping.

Speaking of Gale’s friends, they’ve gotten their makeover too… The Tin Man is a grizzled cowboy, squinting at danger from astride his horse, smoking a cigar and bringing a sense of wisdom to his role. The Lion isn’t so much cowardly as he is more of a “sensitive soul”… we find this out in a scene where Gale is trying to remove vaguely feminine looking makeup from Lion’s face, which she wrongly believes was applied by the Witch’s monkeys. As it turns out, the makeup was just an act of self-expression on the Lion’s part. Finally, Scarecrow is a straw-filled Native American girl, mute (so far) but more than ready to let her actions speak for themselves. How many other people would offer up their insides to protect their friends?

But wait! There’s more! A bonus short story at the end of the book looks like it’s giving some insight into the four sisters, the Witches of Oz, in their early days. You know, before falling houses and flying monkeys and stuff…

This is actually the first book in this series that I’ve read. I haven’t really gotten too much into some of Aspen’s other titles, so I let the first three issues of The Wicked West slip by. We all have to live with our regrets, so maybe I’ll have to do a little back tracking. Based on this issue, the story has me interested in how other parallels are drawn from the original work and translated into the Western genre. 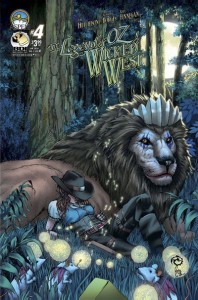 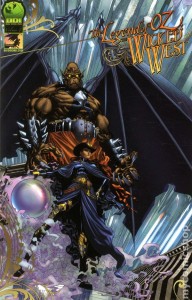