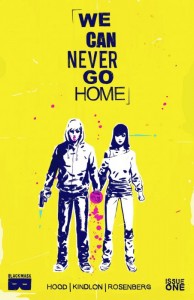 Navigating the halls of high school is never easy. And for teenage outcast Duncan and popular girl Madison things are even harder. They share a secret- they can do things other people can’t. But their abilities and need for secrecy take them down a dangerous path. After making a terrible and deadly mistake they are left with no choice. They have to leave and never come back.

A blend of crime road stories like True Romance & Badlands, coming of age tales like Pretty In Pink & Ghost World, and “outcast kids against the world” books like Runaways & Deadly Class, We Can Never Go Home is a new chance to fall in love with the doomed misfits and the dreamers who set off to find something bigger.

In the realm of teen angst, I’m out of my depth… I haven’t been a teen in a very long while. While I do remember, vaguely, having been a teen, I’m not so sure that I was particularly angsty even then. That said, even I’ve found something to relate to in this story of two teens on the run.

Madison and Duncan couldn’t be more different. They didn’t hang out together, or even in the same area code of high school clique-dom. Where Madison was the pretty hanging with the cool and popular crowd, Duncan was the outcast fringer with no ties to anyone. Even so, the two find themselves in each other’s orbit on the night that Madison’s football playing boyfriend Ben parks at make out point and makes “the move”. Duncan is there, having stolen his drunk dad’s handgun (kids, don’t do that… gun safety is serious business) and gone out for some target practice.

Things get out of hand when Ben spots Duncan outside the truck. Believing Duncan to be peeping, and to be truthful he kinda was, Ben jumps out of the truck to confront him. Before the violence gets out of hand, Madison tries to intervene. When Ben shoves her away, the secret slips… her eyes spark with power, she grabs Ben one-handed, and throws him twenty feet or so. From here, things start to get out of hand. There’s a long walk home that results in a sharing of secrets, a beating that ends in an accidental death, and an interrupted drug deal that ends with a dufflebag full of appropriated cash. Thus begins the off-kilter relationship between Duncan and Madison, two young people who otherwise might never have exchanged more than two very awkward words.

The writing is as sharp as anything else I’ve seen, and the growing friendship between Duncan and Madison puts them on the run from multiple parties (drug dealers don’t like it when you take their cash, police don’t like it when people end up dead, there might be some out there interested in a teenage girl who can toss a car). As far as road trip buddy stories go, there were some elements that reminded me a lot of Preacher by Garth Ennis and Steve Dillon. Other elements reminded me of The Breakfast Club, Breaking Bad, and Fargo. Overall, not a bad list of things to be compared to, in my opinion.

Quirky, kinda fun, sometimes brutal… We Can Never Go Home asks what happens when a couple kids find themselves with great power, but very little responsibility. 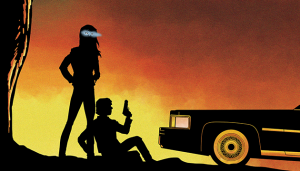 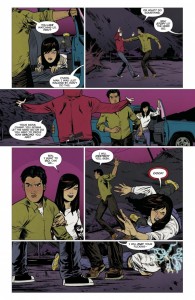 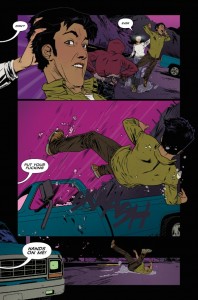 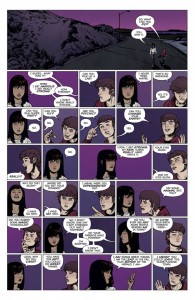