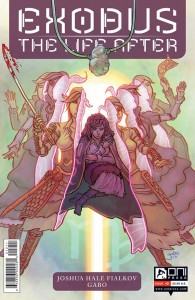 Exodus: The Life After #2
Oni Press
Written by Joshua Hale Fialkov
Illustrated and Colored by Gabo
Letters by CRANK!

Jude is the son of God and the key to changing the afterlife. Unfortunately, he’s stuck in Purgatory with no memory. Rebels Essie and Ernest Hemingway must set Jude free, but they’re out of ideas and down to their last option: Nettie, Essie’s mother and Jude’s killer. She might be able to free Jude, but will it be worth it?
———-

“All of the Afterlife is a Continuum.”

Think on that… No beginning. No end. Just a constant recycling, from one place to the next, always in flux and never actually getting anywhere. To some, that might sound like Hell. To others, it defines the state of Purgatory. To a select group, it’s just a job.

Jude goes spends his days in a persistent state of “almost”. Almost ready to maybe getting the next promotion. Almost having a good night’s sleep on his couch which is slightly less comfortable than his almost comfortable bed. He’s not really unhappy, but he’s not quite happy either. He’s just a guy making it through the day, on a never-ending treadmill of mediocrity and blissfully unaware that he’s the Son of God.

Essie is the head of the rebellious movement who’s determined to find Jude and return him to his place in the scheme of things… She’s precocious. She’s driven. She’s motivated. And she’s around eight. Oh, and her trusted Lieutenant in the struggle is Ernest. Ernest Hemingway. He acts as Essie’s moral compass, helping her out when she starts acting like an angry child (often in language that really shouldn’t be used with a child)… which as she points out (often with language not suitable for use by a child), she is. Essie’s angry because the Afterlife isn’t what it’s supposed to be. Whoever’s in charge has left the running of the place up to middle management functionaries determined to maintain the status quo.

Nelly is Essie’s mom. She’s been kept in a deep, dark pit so long that she can’t really remember who she is or why she’s in a deep, dark pit. Essie threw her mom into the pit personally, because she killed Jude. The story’s still unfolding on that whole ball o’ wax, so I’m probably no less confused or perplexed than you are… hang in there. Suffice to say that the death of Jude (Son of God, remember?), and his subsequent presence in Purgatory, is the catalyst for everything in the hereafter going down the drain. Now the only way to break the cycle is to wake Jude up, remind him of who he is, and hope he can get his Old Man back on track. But we’re talking about disrupting the status quo, here… and not everyone’s particularly interested in change.

This is a story that’s as sharply written as anything out there, the dialogue moving along with equal parts wit and wisdom. Joshua Hale Fialkov has managed to infuse a pretty eclectic cast of characters with depth and insight, allowing their (as yet) untold backstories to flesh out who they are for us, without giving the readers all of the answers. We’re learning as we go, and it’s looking to be a fun trip. What’s more, the artwork by Gabo is so in tune with Fialkov’s words that more is said in a panel with no dialogue than some novels I’ve read. Characters express themselves without saying a word, with often laugh out loud comedic beats.

If I haven’t made myself clear yet, this is a good book. The story is still in its infancy, and there looks to be a LOT to tell. After the first two issues, I’m going to count myself “hooked”.

A+, with a gold star and a smiley…