Hollywood screenwriter and Eisner Award nominee Max Landis (Chronicle, American Ultra, ADVENTURES OF SUPERMAN) joins forces with top comics artists including Jock, Francis Manapul and Jae Lee to bring you SUPERMAN: AMERICAN ALIEN, a 7-issue miniseries chronicling the life of Clark Kent and his development into the archetypal hero he will eventually become.
In this first issue, superstar artist Nick Dragotta (East of West, Fantastic Four) illustrates the story of Jonathan and Martha Kent as they struggle to deal with their 12-year-old son’s latest quirk-he’s been floating up into the air, sometimes hundreds of feet!

This latest re-telling of the Superman origin heads into just pre-Smallville territory. Clark is a boy who hasn’t quite hit that dreamy growth spurt yet, and his powers are just manifesting. The opening scene has Ma Kent catching young Clark’s ankle as he floats out of bed. He isn’t sure how to use his powers, and certainly has no control over them. As he learns control with the support of his parents, you have to admire the excellent example in parenting put forth by the Kents. Max Landis weaves a really down-to-Earth tale about a kid who isn’t from there, and I smiled through the whole thing.

Nick Dragotta’s artwork does the superheroic task of making Clark Kent an average kid – no hyper-advanced musculature or anything that would suggest “alien.” You have a lot of very un-fussy Midwesterners coming at you from each page, from the farm kids to the hired hand who declares them “hippies” for driving a truck with someone perched in the bed. The colors suggest a golden childhood that we all wished we’d had.

Like many readers, it’s easy to look at this and think ANOTHER Superman story. ANOTHER origin story. This is not a traditional origin story. You’ve seen Superbaby and Teen of Steel. This is the story of a really super kid with amazing parents, and it’s wonderfully, achingly NORMAL. He could be any kid in Smallville; he just happens to have a few powers. A stellar start to what looks to be a really thoughtfully created series. 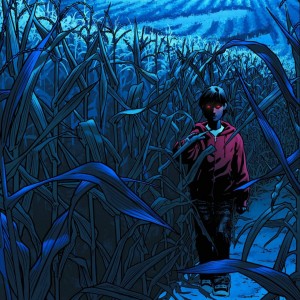