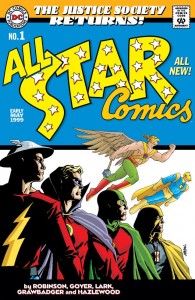 All Star Comics #1 (May 1999)
Return with us to the turning point of the 20th century, World War II, when fascist oppression threatened the globe and the cause of liberty was championed by the original, greatest super-team – the Justice Society of America! In the war’s final days, a group of seven spies attempts to summon an arcane being that may ensure victory for the faltering Axis Powers.
———-

I wanted to dig into a good “Throwback Thursday” kind of review, and I think I found the perfect thing… First of all, there aren’t very many comics out there that are more “throwback” than anything featuring the Justice Society of America. Second, the story arc I stumbled into (thank you, ComiXology, and your timely JSA sale) starts in the pages of All Star Comics #1 which released in May of 1999.

The story starts with Rex Tyler, aka Hourman, recalling the day he was presented with his hourglass pendant, received from his future, adult self. From here, Rex recalls his short lived retirement from the life of a “Mystery Man”, and the night that his addiction guided his hand as he once again swallowed the Miraclo pill that would give him superhuman strength, speed, and agility for one hour. As he puts it, the addiction wasn’t to the pill itself, but to the life of the costumed adventurer.

On this particular night in 1945, Rex was working as a scientist on a project for the United States government, developing a truth serum for use in the questioning of Nazi agents. He’d noticed suspicious behavior from a co-worker, and decided to once again use the Miraclo and don the costume of Hourman to uncover the truth. He followed his suspect to an abandoned cement works, and discovered much more than treason against the U.S.

Dr. Occult, a fellow man of mystery, was the captive of a group calling themselves the Black Occult Fraternity, Nazi agents using mystical power to further the cause of the Third Reich. In this case, the Brotherhood was attempting to summon a demon lord to do their bidding. Realizing that he was out of his depth against sorcery, Hourman summoned backup: Dr. Fate, Sargon the Sorcerer, The Specter, Zatara, Merlin, and Tor… all the mystic might the Justice Society of America could bring to bear.

In the battle that followed, it was discovered (too late) that the Brotherhood had counted on this sort of intervention, and that they had planned to use the magical energies of the JSA’s members to complete their ritual summoning. What they didn’t know what that they had summoned the wrong being. Instead of a mere “demon lord”, they had allowed a being calling himself “the Stalker” to cross into our world.

Once a human from another time and dimension, Stalker had made a deal with Dgrth, a god of war. In exchange for his soul, Stalker would have the power of war at his disposal… but he was cheated as Dgrth decided not to wait for Stalker’s death to claim the soul. Seeing the torture of an eternal, but empty life ahead of him, containing nothing but pointless violence and conflict, Stalker determined to end Dgrth’s reign by eliminating all war, the source of his power. Of course, the only real way to ensure the end of war was to eliminate all life… a lasting peace through the end of life.

Hourman was able to rescue the unconscious Dr. Occult and escape the devastation that Stalker leveled against the Brotherhood who had summoned him, and brought him to the only people who could possibly stand against the new threat: The entire Justice Society of America roster is gathered! Starman, Sandman and sidekick Sandy, Wonder Woman, Green Lantern (Alan Scott, not Hal Jordan), Hawkman and Hawkgirl, The Flash (Jay Garrick, not Barry Allen), Dr. Mid-Nite, Johnny Thunder and his Thunderbolt, Wildcat, Mr. Terrific, the Atom (Al Pratt, not Ray Palmer).

The JSA takes the fight to Stalker, and they put a pretty solid whupping on him. So much so that Stalker withdraws in order to regroup, but not before summoning seven “disciples” from the members of Occult Brotherhood he killed, to carry on his work. Stalker and his disciples disappear, each with his own mission to carry out the destruction of the human race, which begins by forcing the JSA to divide their forces as they follow. What follows over the course of the next eight issues in this arc is an ongoing battle, each team of two JSA members taking on one of Stalker’s minions, before the final fight against Stalker himself in All Star Comics #2.

Now, say what you will about the Golden Age of comics, but these were the characters that started it all. Not all of them have survived the decades, but every one of them set the foundation for all comic books to come, and together they formed the first super group. This gathering of heroes represented what was best in all of us… the will to do whatever it took, with whatever skills they could bring to the fight, to see justice done.

The writing in this arc is covered by a slew of talented names, including the likes of Ron Marz, Chuck Dixon, Mark Waid, and (yep, you heard me) David Goyer. The artwork, as well, is carried out by an equally talented crew. The result is a more three dimensional and entertaining story than was ever seen in the heyday of the Golden Age. Sure, we talk about the greats that came out of those early days of comics, but by modern standards the work is admittedly flat. It was all about the bad guy of the month, one issue for one story, and very little in the way of “meta-plot”. Characters were more or less caricatures of what the general public, generally a much younger audience than we have today, thought a hero should be: steadfast, honest, brave, and above all, Heroic.

In these books, the men and women who paved the way for the heroes of today are treated with the love and respect they deserve, and they’re fleshed out to appeal to the more mature readers of the modern age. They have doubts, motivations, aspirations, all set aside for the sake of the greater good. Even the story itself covers some themes that are greater than the sum of their parts… The horrors of war, acts committed on both sides, that have nothing to do with “justice” or “fair play”. The changing of the times, with perceptions and opinions becoming more cynical, and the ability of these heroes to adapt, to lead the way by setting an example we should all aspire to. Sacrifice, both personal and on the global scale, giving a glimpse at what it takes for anyone to set aside their own well-being for the sake of the greater good.

Overall, I loved this story arc, and I want to once again thank ComiXology for bringing it to my attention in the form of the JSA sale. As a kid, these were the heroes that got me into reading comic books, well before the likes of the Punisher, Ghost Rider, and Wolverine came along with their more cynical brand of heroism. I’d urge anyone to check these books out. They’re worth the time for any fans, old and new, with a great look into the world of the Golden Age of Comics. 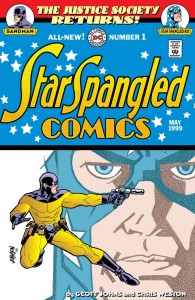 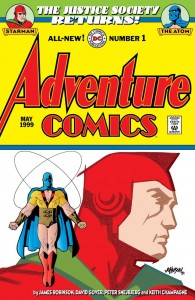 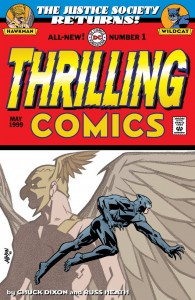 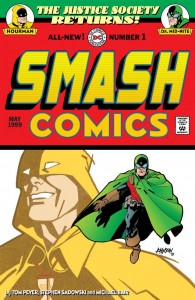 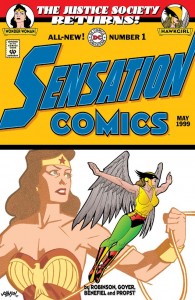 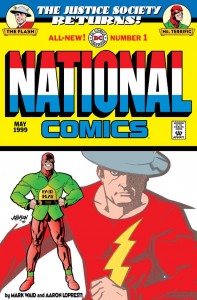 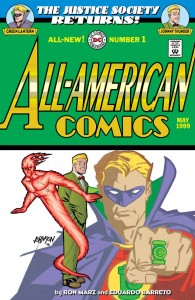