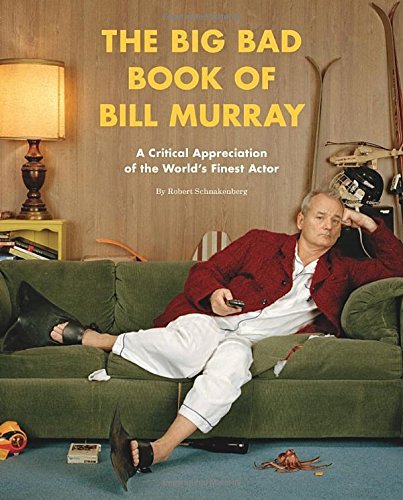 The man. The movies. The life. The legend. He’s played a deranged groundskeeper, a bellowing lounge singer, a paranormal exterminator, and a grouchy weatherman. He is William James “Bill” Murray, America’s greatest national treasure. From his childhood lugging golf bags at a country club to his first taste of success on Saturday Night Live, from his starring roles in Hollywood blockbusters to his reinvention as a hipster icon for the twenty-first century, The Big Bad Book of Bill Murray chronicles every aspect of his extraordinary life and career.

He’s the sort of actor who can do Hamlet and Charlie’s Angels in the same year. He shuns managers and agents, and he once agreed to voice the lead in Garfield because he mistakenly believed it was a Coen Brothers film. He’s famous for crashing house parties all over New York City—and if he keeps photobombing random strangers, he might just break the Internet.

Part biography, part critical appreciation, part love letter, and all fun, this enormous full-color volume, packed with color film stills and behind-the-scenes photography, chronicles every Murray performance in loving detail, recounting all the milestones, legendary “Murray stories,” and controversies in the life of this enigmatic performer.

It’s not often that ThePullbox.com reviews books that are not of the comic variety, but it does happen from time to time. And if Quirk Books asks you if you’d like to read a copy of book about Bill Murray, you say “YES!” (see what I did there?)

Without sounding too crass or going into the “too much information” area, this book is perfect for the bathroom. Most men, and some women, understand what I mean here. This is the perfect opportunity to set the cellphone aside and do as our forebears have done for generations, read something while dropping a deuce.

Bill Murray has been sharing his awesomeness for almost three generations, and the best part is he’s still doing it. This book is filled with essays, trivia and second hand stories about Bill Murray being Bill Murray. We get insights into his movies, life, and relationships he’s had over this life time. The title could easliy have been “Bill Murray’s Big Bad Scrapbook of Awesomeness.” It is really an amazing read for anyone who loves biographies, but for a Bill Murray fan, it’s a peek into the man’s life. Schnakenberg shares everything from Bill’s thoughts on the religion to some of the feuds Bill has had during his time on Earth.

So what’s the down side to this book?

First is one that Schnakenberg is very upfront and honest about: Bill Murray had nothing to do with the creation of this book. The book is assembled from articles, quotes, and interviews with people that knew /know Bill in one capacity or another, but Bill himself had no actual involvement. So keep in mind that this is a book about Bill, not a book by Bill.

The second issue, which I was fine with but my wife didn’t like, was that it’s written in an encyclopedia format. So on one page your’re reading about Bill’s love of golf, and the next page is about the movie Groundhogs Day. If you’re an avid reader of biographies and autobiographies, then you might not like the non-chronological flow of the book. But as stated above: If your killing time while letting nature take it’s course, the short article format is perfect.

Bottom Line: If you’re a Bill Murrary fan, you’re going to love this. Some of the information you know already, but having it in this format is just pure bliss. And with an Amazon price point of $12.63 (not kidding, click here get it), you can’t go wrong!