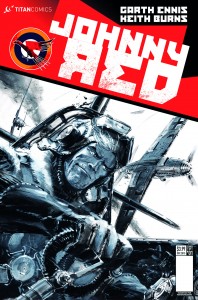 Legendary British fighter ace, Johnny ‘Red’ Redburn, returns once more as the commander of the Falcons – a Russian fighter squadron battling the Nazis in the skies over Stalingrad. But dogfighting Messerschmitts is about to become the least of his troubles when the NVKD – the notorious Soviet secret police – come calling!

The explosive new series features original adventures of the fighter ace who thrilled millions and rocketed to status as a classic British comic character in the pages of legendary combat comic Battle – and now he’s back!
———-

Anyone with an interest in World War II stories can look at this title with a glimmer of hope, that maybe something great is coming. And they could very well be right! I grew up watching the adventures of Pappy Boyington and the Black Sheep Squadron on television, and thought it was the coolest thing I’d ever seen (calm down, this was before Star Wars used old WWII dogfight footage to fantastic effect). The tension of flying an airplane that’s been patched up with tin from discarded beer cans, your squadron behind you the only thing you can count on when the bullets start swarming you like hailstones… that was what I remember in those old TV episodes.

How in the world was that kind of action going to translate into a comic series?

I’ll tell you. It’s translated with the grit and gristle that Garth Ennis brings to his writing, regardless of his subject matter. It’s in the dialogue, the chatter between fighter aces as they blaze through the sky. It’s in the details that are laid out on the page as we learn what all goes into the restoration of a vintage Hurricane fighter plane, the history giving life and pride to a flying machine that’s seen better days. And it’s in the stories of the people on the ground who depended on the brave men flying the Hurricanes, as the Nazi war machine pushed forward with a will.

Some of the action is tough to track on the page, but it almost makes you wonder how the fighters were able to identify targets from friendlies. And then you wonder if the art was intended to be a little chaotic in that respect. In this case, I chose to give full marks to Keith Burns in that regard. His work in the dogfights had me scanning every detail on the page, picking it all apart to spot the important details. The fact that I had to work for it a little took nothing at all away from the story this book is working to tell.

And it’s a good story… the tale of Johnny Redburn, British fighter ace who was drummed out of the Royal Air Force, and chose to continue the fight any way he could. In this case, his determination takes him to Russia. Behind the stick of a Hurricane again, he flies to support what air force the Soviets are able to cobble together using anything they can scratch together and put into the sky. The primary mission of the Falcons is air support, dropping supplies to the people on the ground as they hold the lines against the German advance. Where those supply runs are threatened by the encroaching Messerschmitts is where Johnny Red and his squadron come in. And they’re coming in hot, preceded by the reputation of this British flying terror, the Germans exclaming “It’s HIM!” as they realize their time is up.

Okay, maybe I got a little excited… I told you, Baa Baa Black Sheep was my favorite show for years. The memories are still there, they still have the ability to bring out that little kid in me, and those feelings are very well represented in this book. 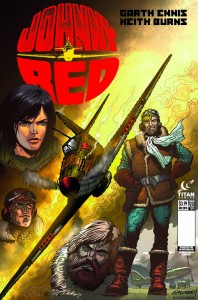 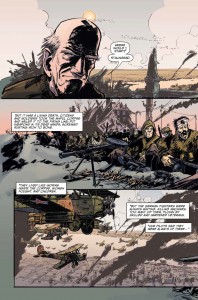 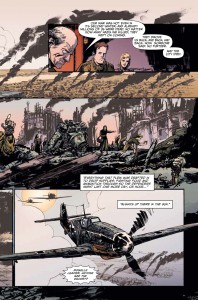 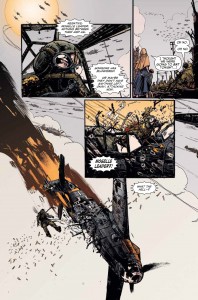