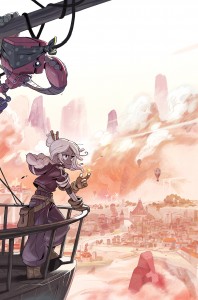 Tyson Hesse’s Diesel #1 of 4
Written and Illustrated by Tyson Hesse
Diandra Diesel isn’t very good at anything. The daughter of the late Tungston Diesel, she has yet to live up to her father’s great reputation. Her childhood rival has inherited control of her family’s airship and left Diandra the only job she’s qualified for: picking up the trash. But all that changes when a mysterious flying engine crashes into Diesel’s life and takes her on a journey through the skies.
———-

I’m not at all, in the least bit looking forward to the day that the market is over-saturated with Steampunk. As a genre, it’s probably the one that holds so much promise for original storytelling that its fall is destined to be epic. But, until that very sad and tragic day, we can all sit back and enjoy what we have, while we have it. Which brings me around to Tyson Hesse’s Diesel, a coming of age story about a girl who is destined for great, great things… unless she irritates everyone so much that they toss her out of her own ship.

Dee Diesel is the quintessential “precocious teen”, convinced that everything she thinks she knows is gold. She eagerly waits for that most glorious day when she turns 18 and can take control of the airship left to her by her father, Tungston Diesel. Meanwhile, everyone else aboard the giant airship Peacetowne is not-quite-patiently waiting for the day that little Dee grows into the legacy her father left behind. With just a little luck, that’ll happen before the sudden but inevitable tragedy strikes, and sends Peacetowne plummeting from the clouds. This being issue one, that tragedy should hit around page 27.

Character wise, Diesel is populated by characters who each have their own story, their own traits, and their own distinctive style. Cap Wells is the young pilot entrusted to keep Peacetowne flying. North Belding, the first mate, seems to be doomed to stand as the buffer between Dee and Cap, endlessly asserting that Dee is young and just needs to be given time to grow into her role. Phillip Hedricks is the mechanic who managed to piss someone off enough to leave him more or less responsible for Dee, hopefully long enough to actually teach her a trade.

The artistic style is one very well suited to the tone of the book… equal parts manga and fairy tale… and complements the writing fairly well. By the end of the first issue, we’re given enough of a taste of things to come to pique interest. If lighthearted reading, following a young heroine who we hope grows enough to cut back on the whining and pouting by the fourth and final issue, appeals to you, this could be your book. If you’re looking for a more darkly toned, brooding book about the apocalypse, you might wanna see what else is out there. 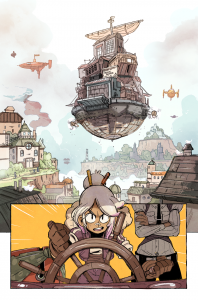 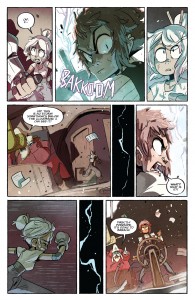