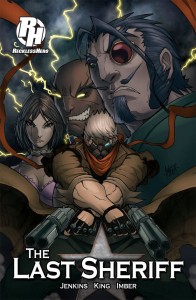 With the V8 heavy metal thunder that was Mad Max: Fury Road still echoing in the collective conscious, it was inevitable that the post-apocalyptic story would have a creative surge. Not that it’s ever really gone away… That particular genre always seems to be hovering out there, maybe finding a lull here and there but always ready to swing back around like a mutant cyborg behind the wheel of modded out Ford Mustang. I’m a fan of the genre, always have been and most likely, at this stage in my life, I always will be.

It’s cool when someone not affiliated with the Big Three (Marvel, DC, and Image) takes a shot… With the creative team of Chris Jenkins, Matthew King, and Chris Imber, we get not just a post-apocalyptic story, but we also get another classic genre that always seems to be on a cycle in and out of vogue: The Western.

The Last Sheriff is about a time when “law and order” are for all intents and purposes, outlawed. The Sheriffs, champions of justice, gifted with the best in cybernetic enhancements and trained to be living weapons, have been systematically hunted down and killed. Everyone associated with them, anyone related to them, who’s ever aided or supported them, has been slaughtered as an example. The gangs have been gathered together under The Coalition, and with the Sheriffs dead and out of the way, they are the law.

There is still a Sheriff out there, alone in the Badlands, an outlaw hunting outlaws doing his best to hold up his oath of office: To protect the people who would be victimized by the goons of the Coalition.

So far, in this inaugural issue, we have a pretty brief but thorough introduction into a very broken world. It’s just mean… Like Furiosa said, “Out here, everything hurts.” Life is cheap, and apparently cybernetics are cheaper, because everyone seems to have them… which is pretty cool. It gives a definite insight into this world, where survival of the fittest isn’t just a string of pretty words. If you aren’t tough enough to take what you want and keep it, you’re just meat in the grinder.

The artwork has strong manga ties, and that works out great for this kind of action driven book. The action is dynamic and firmly over the top, with a plethora of dusters flaring wide as pistols are drawn and the lead flies. Stylistically, this book should by all rights find a solid niche out there among the growing lists of independent comic distributors.

Leave your Shakespearean sensibilities at the door, pilgrim… You’re not gonna need it here. Just wipe your boots on your way in. 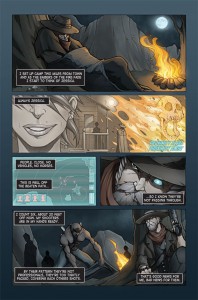 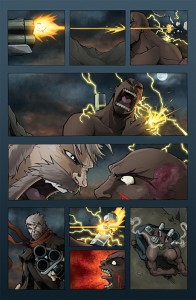