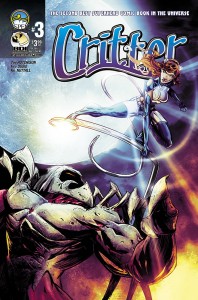 The newest re-mastered debut from Aspen’s Big Dog Ink imprint continues! Critter hits the town with her new friend and ally, but is the famed life of a celebrity going to be too much for her to handle?Featuring re-mastered content, an exclusive behind-the-scenes look at Critter, creator commentary and more! Don’t miss out on the second of Aspen’s all new BDI launch titles with the return of CRITTER!

In an industry full of heroes in tights, it can’t be easy to come up with an idea that will stand out in the crowd. Just getting something original out there, past the “Big Three”… Marvel, DC, and Image… (not even mentioning Valiant and Dark Horse- um, except that I kinda just did), has got to be a challenge. I tip my imaginary hat to anyone with the stones to give it a try. I’ll even get a hat, put it on, and tip it for real when a book comes along that acknowledges and fully embraces the ludicrousness of the superhero concept at a time when the flavor of the day seems to be “gritty realism”.

Come on… People flying around wearing outfits that would get them arrested in the real world? Creating chaos, causing endless property damage, and quipping with each other like demented standup comics at a celebrity roast? It’s ridiculous. It’s ludicrous. It’s absurd. And God help us we love it!

So along comes Critter. At the surface, she doesn’t look like she’d stand up against some of the other supers that inhabit her world. Paradox, Starlette, Slipstream… all powerhouses by any definition and in any comic book universe, yet they all seem to center on unassuming Critter. Sure, she’s super agile, apparently strong, and has a prehensile tail (it’s part of a belt that used to belong to her mom), but in any other comic ‘verse she’d be comfortably nestled into a supporting role. And maybe that’s the best thing about this book. With a wink and a nod, Critter is the linchpin that holds her world together.

The deep sea monarch Tidepool is at the head of an large scale invasion, leading his mutant Amphibodons against the surface world. His army is met at every front by heroes determined to protect the innocent. In Southern California, Starlette and Rookie have stemmed the tide (that’s a nautical reference). Starlette lets loose with bursts of energy, blazing her targets to cinder. Rookie absorbs those same bursts of light energy and uses them to create solid weapons, Green Lantern™ style, slugging it out toe to toe with the crustacean menaces. They hold the line against impossible odds while waiting for help to arrive.

Meanwhile, Critter pauses on her way to the fight to stop a mugging. In the face of a full scale invasion, a simple mugging holds her up, and that’s where I got invested in the book. Regardless of how big the overall threat is, an amphibious invasion is just a concept to the person being mugged, while the mugging is their reality. With no crime too small, Critter is there to help.

I liked this book on different levels… First and foremost, it recognizes itself for what it is, and it takes pride in that. Nothing seems to be taken too seriously, regardless of the stakes being presented… the heroes fight, the fight is over, the heroes go home and go to bed knowing full well that tomorrow’s another day, and in all likelihood another fight. It’s cool. No big.
More than that, the creative team is doing a great job of getting me interested in the world that they’re building. The writing here is pretty sharp, not trying to recreate the works of Shakespeare, but still telling the story. The artwork more than does its job, presenting the action without too much clutter to muck up the flow, and taking its share of the workload in the storytelling… Both major factors in the comic book equation, writing and art, have to fit together. In Critter, I think they do so nicely, all while keeping an eye on the entertainment aspect.

So? Stop listening to me yammering on… Go read the book. 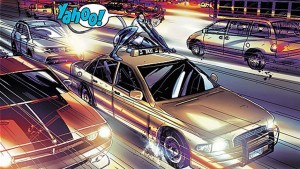 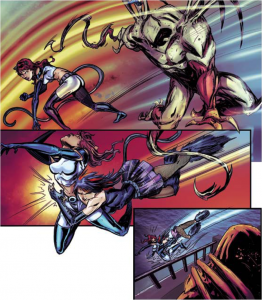