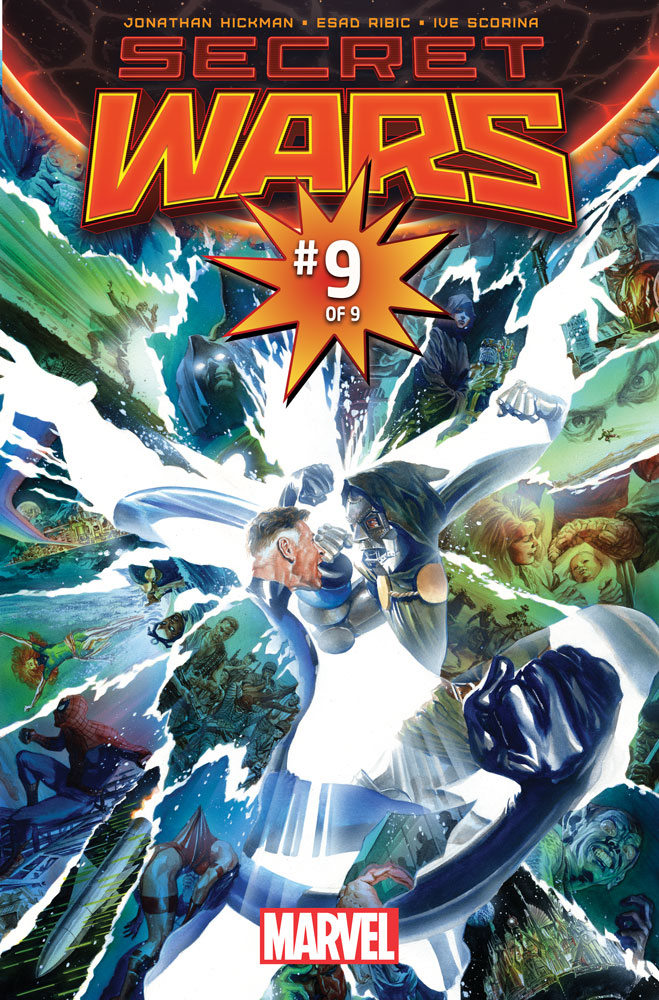 It’s the story that has the whole world on the edge of its seat. The biggest Marvel event of all time. The story that destroyed the Marvel Universe. And if you thought it couldn’t get bigger – you thought wrong. Today Marvel is pleased to announce the expansion of the blockbuster Secret Wars event with SECRET WARS #9 – coming to comic shops later this year!

“Apparently, Secret Wars is even bigger than we thought it was,” says Editor-in-Chief Axel Alonso. “To help Jonathan and Esad conclude this epic event as big and bombastically as it started, we are adding an extra issue.  That means one more month of the suspense, action and game-changing storytelling that fans and retailers have been clamoring for since the final incursion started.”

Chartbusting creators Jonathan Hickman and Esad Ribic will extend their stay on Battleworld for one more epic issue. Allowing their cataclysmic story to wrap up as intended, this additional issue will bring Secret Wars to its explosive conclusion. Paving the way for the future, be there for the genesis of the All-New, All-Different Marvel Universe.

“This extra issue will not affect any of the new launches as part of All-New, All-Different Marvel,“ says David Gabriel, Marvel SVP Sales & Marketing. “But there might be a surprise or two left over from Battleworld you weren’t expecting. In fact, like the original Marvel Super Heroes Secret Wars, some of those puzzle pieces will hit the Marvel Universe before the event concludes. But if you want to see how they all fit together, you don’t want to miss these last few issues.

Battleworld teeters on the brink. What will become of this strange patchwork planet? Who lives? Who dies? One thing is for certain – nobody will come back from Battleworld the same after SECRET WARS #9 this December!