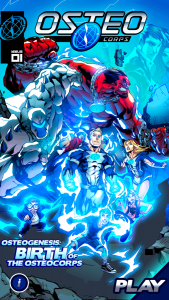 Author: Dr. Steven Cyr, MD
Artist: Thiago A. Silva (Thanks for the update, Doc!)
Animation: Thales Silva
The premise of the OsteoCorps was Dr Cyr’s life-long desire to eliminate injury and disease. Its main characters, the mentors of the OsteoCorps, are likenesses of Dr. and Mrs. Cyr. Ian Cision and Ann Cision (puns for Incision) are researchers who have devoted their entire lives to formulating a serum that can reverse or prevent injury and illness. The story begins with the successful creation of the Genesis serum and how it accidentally transforms the Cision children into superheroes. Dr. Cyr conceptualized every character personally, their powers, arch enemies, and battles based on injuries, illness, and treatment of the muscular and skeletal systems. The idea is to teach children about their conditions and the science behind the source and treatment of each condition without it being obvious. He wanted to create unique characters imbued with special powers that were in line with those needed to treat their injuries and disease states. In the entertainment world, this is called Edutainment. It is entertainment with a purpose.

Each villain from the MalUnion (a pun for the term malunion which means a broken bone which has healed resulting in a deformity or a crooked limb), a league of bad guys controlled by their leader, FraXure, is imbued with powers of destruction and disease. The spin on the so called “bad guys” is that all but the two evil leaders, FraXure and Vertebro, are actually friends or relatives of the Cisions who have been given a poisoned version of the curative Genesis serum.

The idea is to point out that people with injuries or disease are not bad or mutated, but merely sick or ill. Dr Cyr wants to make sure that children don’t feel like being injured or having a disease makes them “bad” so to speak, but merely sick. His characters all have specific strengths as well which forces them to work as a team to effect healing and to become victorious over the MalUnion.

Ultimately, it’s a battle between health and illness (good vs bad) but in a totally new frontier. The characters can adjust their cell sizes and thus, their bodies, to be nanometer sized or normal sized. They can fight in the body or in the outside world. The battles are limitless as are the types of cells and diagnoses facing humans. The battles begin in the musculoskeletal system but will likely eventually spread to other systems of the body. Characters such as Captain Osteon, Fusion, and Cobalt Chrome form the core of the OsteoCorps. They are the Cision’s children morphed into adult versions of themselves with super powers but can readily transform back into children. They battle “bad guys” like FraXure, Slipped Disc, SkullyOsis, and CoreOshun. The story is unique. The medical terms are informative and empowering. Edutainment has never been more exciting. Follow the OsteoCorps to unveil the excitement and mystery superheroes can add to understanding medicine, the body, and all its wonders. Your journey awaits…..
_____________

Written by a doctor with a very specific and admirable purpose, the Osteo Corps does its job very well. The idea behind this comic series is to give children some sense of power or control when faced with an injury. What better way to address this issue than with the one universal children’s language……. Superheroes! Take some medical terminology, things that a kid might hear in the doctor’s office after he or she has taken a spill off of their bike, introduce a some young characters for kids to identify with, and create a super group built around concepts of empowerment and responsibility. Sounds like a pretty decent premise.

First and foremost, I want to point out that this really is a book aimed at a younger audience. You’re not going to find many “anti-heroes” or overly complicated plot lines here. The writing is simple and to the point, and it’s all laid out in a very formulaic setup that brings the reader past the boring stuff and right into the action. I can tell you that the artwork is sharp and dynamic, and that what this “motion comic” does inside the app is impressive. The animation might be fairly rudimentary, not bringing much more than digitally moving a static image across a panel, but the Osteo Corps brings more than that to the table. The comic is fully scored, complete with sound effects and voice acting throughout.

If you’re looking for something to read with your kid, or if you have a kid who’s done what kids do every day and ended up with an injury, this could very well be the comic for you. It’s purchased as an “app” for Apple and Android devices. It could be just what the doctor ordered.

Oooh, that was bad. Sorry.