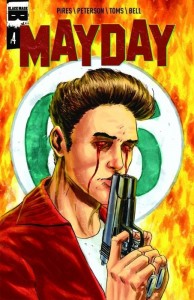 Maybe that’s not quite right… How ‘bout we start with what Mayday does, because that might be a little more important than trying to pin down what it is. Mayday follows the misadventures of freshman filmmaker Terrance Gattica. His first film was a huge success, and he was handed a crapton of cash to follow it up with another. Instead, he’s managed to consume enough alcohol and cocaine to do any rock star proud, and he’s got nothing to show for it.

Enter the existential cultists on their path to enlightenment through righteous murder spree… hang on, this isn’t even the weird stuff… What follows can only be described as possibly hallucinated chaos and anarchy. I say “possibly” because Mayday does a great job of balancing the reader right on the edge of making up their mind one way or the other. In many respects, the story is very reminiscent of other stories… the aforementioned masterpiece Fight Club, Leaving Las Vegas, and Donnie Darko, just for starters. On the technical side, the writing and artwork reminded me a lot of the Preacher series, with the part of John Wayne being played by James Dean.

Without a doubt, Mayday is a head trip. The “fourth wall” is broken constantly as the characters alternate between the belief that they’re either playing roles in a movie, or characters in a comic book. If you ask five people to read the book and relay what it’s about, it’s a fair bet that you’re going to get five different answers. It is a very well written story, with some interesting and pretty genuine sounding dialogue (always appreciated when compared to some more rote and clichéd writing). In the end, I would have to say that I do recommend the story, but I’d like to give one word of advice to anyone taking a look at it… Give yourself some time, read all four issues in a single sitting. You don’t want to have to put yourself through the head trip of disengaging the logic circuit more times than you have to. 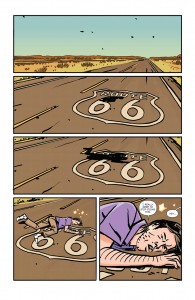 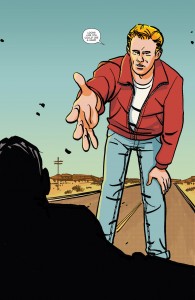 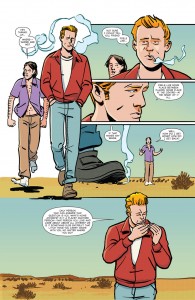 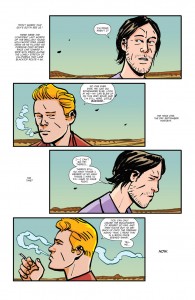 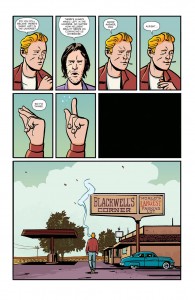