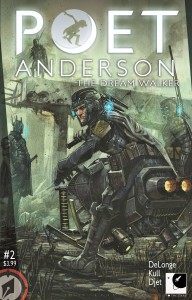 In the Dream World, power and adventure belong to the Lucid Dreamers, while Night Terrors haunt the troubled and the helpless. A lucky few are watched over by mysterious guardians. The protectors of our shared unconscious lives are known as…

If took the story of Peter Pan, wedged it into the imagined reality of Alice’s Wonderland, and seasoned it all with the “chosen one” mythos of The Matrix, you’d have an idea of what kind of story is being told in the pages of Poet Anderson. We start with two brothers, Alan and Jonas Anderson. Their parents work long hours to take care of their family, leaving the brothers to their own devices for most of the days. As anyone who’s ever been a “latchkey kid” can tell you, too much time unsupervised can lead to all kinds of adventures.

Issue one left off with Jonas only beginning to see the powerful ties between the Waking World and the Dream. He and his brother Alan traveled into the Dream World as “lucid dreamers”, able to recognize the dream for what it is and to some degree control it, and join up with Ayo… no Dreamer, this one, she’s actually a dream given form. He’s visited Genesis, the central city of the Dream where humanity’s shared dreams are brought together in an amazing amalgam of imagery. He’s experienced the exhilaration of cruising across the dreamscape on a stolen cycle, the fear of stampeding Night Terrors, and been captured by marauding Night Stalkers.

In issue 2, Jonas comes face to face with Rem, the Highlord himself, and gets a glimpse of what he can look forward to at Rem’s hands.

Rem needs Halos… powerful orbs made up of the souls of Dreamers. In his hands, Rem can use the orbs to cross into the Waking world where he takes possession of the host body. His intent is to create a living nightmare on Earth, by which he can increase his power in the Dream. Being a creature born out of humanity’s collected nightmares, Rem would gain godlike power and be one step closer to achieving his ultimate goal. Ordinary Halos from ordinary Dreamers are fine, and Dream Walkers are better, but if he could gain control of a Poet’s Halo he would be worse than unstoppable. He’d be able to use the Poet’s ability to cross between dimensions to rip open a doorway between the Waking and the Dream worlds, and cross over with his army at will.

This series has a lot going on so far, and we’re only two issues in. The scenery can very easily be believed to be taken straight out of dreams, and it’s beautifully rendered by Djet in a style reminiscent of anime at its best. The writing is bringing out a deeply layered mythology, little by little, and it works out great because the reader is learning it all at the same speed as the story’s main character, Jonas. Or as we’re going to come to know him, “Poet”. There are mysteries to be solved, destinies to be fulfilled, and family secrets aplenty to discover before Jonas can lay claim to the awesomeness that is found in this most awesome trailer for the animated short film…
https://www.youtube.com/watch?v=WuRkHfW8MaQ

This is one I’m going to follow, and look forward to doing it in whatever medium I can find it in. 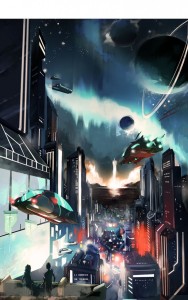 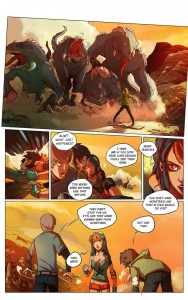 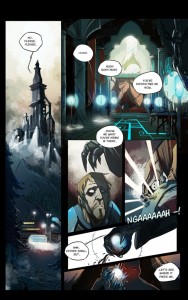