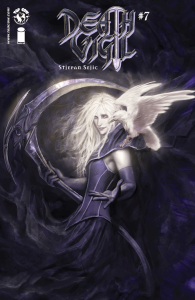 Death Vigil #7 (Image / Top Cow – Sejic)
“Defeated and hopeless, Bernardette is sealed away in an unknown location while Sam is on death’s bed… again. This has not been a good day for the Vigil. Can Clara, Mia, Anubis, Chiyoko, and Vlado find the enemy stronghold in time? Who would even know where it is?”
——–

Yeah, I know. Sorry. This just happens to be one of those rare finds that I’ve run across that seems to dig its way into my brain, and I have to share. A lot.

If you’ve gotten on this particular train, you’re aware of some of the great things about the way Sejic tells a story. He uses sharp and witty dialogue to give his characters unique personalities. His artwork carries great colors to the page, pulling the reader along and giving plenty to look at. When he draws a character, it’s more than just a heroic pose… he uses facial expressions to invest more personality than I see in some people on a day to day basis. In short, his work is always a pleasure to look at.

This is Sejic’s best work. To now, there really hasn’t been much pressure on the members of the Death Vigil, and it’s all been merry hijinks and witty banter. On their own, this group of undead crusaders is a powerhouse, each in their own right. When they’re in a bind and decide to call for help, the appearance of Bernadette… Death incarnate herself… the most powerful of the demonic forces doesn’t have a prayer. With those kinds of heavy hitters in play, what can you throw at them to raise an eyebrow?

Along comes Maria. She’s not a hellspawn seeking to bring about the End of Days. She’s not a super villain bent on world domination. She’s that most insidious of enemies, a good person without hope. Maria blames Bernadette for the death of her daughter, Alicia, and will shake the pillars of heaven itself to get her back. This includes systematically killing off members of the Death Vigil and making off with their weapons to power a ritual, imprisoning Bernadette and using her scythe to complete it. Her ultimate goal is to bond her daughter’s physical being with that of something H. P. Lovecraft couldn’t have dreamed up. The catch? Despite Maria’s insistence to the contrary, Alicia has no physical body with which to bond… Which leaves the question, who has Maria been talking to?