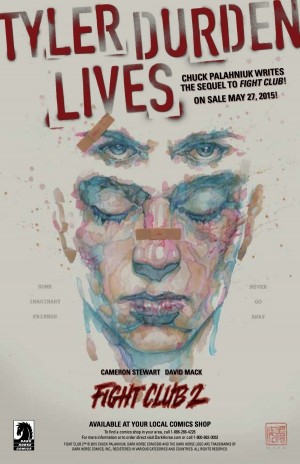 Let’s not mince words: Fight Club 2 is simultaneously a haunting and triumphant return to the depth and severity of its predecessor. An instant success from the first page onward.

There’s something strange and stirring about revisiting a series as intense and deep as Fight Club, like driving through your hometown after what feels like a lifetime away. From the very first page, Fight Club 2 violently grabs you with claws of nostalgia – everything you loved about the original resurfacing fondly, but leaving you wondering if it can survive. How often do series wait too long to capitalize on our enjoyment of them? Dumb and Dumber 2 leaps to mind, not a terrible film, but a bit too late in the grand scheme of things to land with the full weight that it might have otherwise. Fight Club 2 dismisses that concern – time is not a factor for quality, nor is it a factor for Tyler Durden, it seems. Tumultuous and aggressive, the story attacks a nerve closer to the surface than we realize; Willing complacency in society, and in our  own lives. The story surrounds Edward Norton’s protagonistic lead (referred to by some as “Jack”) in his life after the events of Fight Club; Going by the name “Sebastian” as he lives a quiet life in the suburbs with a miserable Marla and their chip-off-the-old-block child together – actively keeping himself medicated to keep Tyler at bay.

The art has a very different aesthetic tone from the original film, colorful and lacking the gritty and sketched-out vibe that would feel appropriate to the original – instead opting for very careful and clever juxtaposition of words and overlain imagery to capture the same frantic, confusing feeling that perpetually inhabits Sebastian’s mind. Long story short, it works. I was almost disappointed it didn’t have a more gritty artistic tone but in actual practice, the choices made work on every level. The story, similarly, accomplishes everything you could hope for it to – in the span of a single issue grabbing us back into the colossal gravity of the original story while thrusting us face first into something new and equally gripping, dropping us off at a point that completely and utterly demands issue #2 release as soon as humanly possible. This series has a lot riding on it, beyond being the first step of the unbelievably talented Chuck Palahniuk into the realm of graphic novels, but supporting itself under the weight of a great many lofty expectations from die-hard fans of the original book and film.