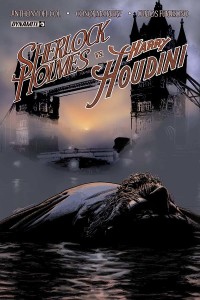 Sherlock Holmes vs Harry Houdini #5 (Dynamite – Del Col / McCreery / Furuzono)
The thrilling conclusion to the critically acclaimed series sees two become the sign of the one… Rasputin, the mad Russian monk, has forced either Holmes or Houdini to take their final bow, leading our remaining adventurer to rally his spirits to combat the man who cannot be killed.

I’m a fan of the “mashup”. Take two things, which are individually inherently cool, and pull them together in situations which require the combination of their respective talents. When it’s done well, which it most definitely is here, the mashup is like reliving the US Olympic “Dream Team” take the rest of the world to school all over again.

London faces the wrath of the Mad Monk Rasputin as he seeks to reawaken the “spirit of Russia”. With Holmes out of the way, it falls to Houdini to make his escape and prevent mass destruction. Thankfully, Rasputin falls victim to the same instinct that has plagued villains for as long as there have been heroes to stand against them… the monologue. In the time it takes Rasputin to spell out his plans, I was able to boil some eggs for dinner. For Houdini, that’s more than enough time to come up with a counter-attack.

The creative team has done a great job of pulling these very different individuals together in a story that respects its roots. It had to have been a little intimidating to try to come up with a meeting between two very different historical figures, and one of fictions most well known detectives. Things could have very easily gone wrong, and it is an impressive leap of faith that Anthony Del Col, Conor McCreery, and Carlos Furuzono pushed forward and made it work.

For me, the best part of this book was just the idea of how these two characters, one fiction and one both real and larger than life, interact. On the surface, the idea that Holmes would be able to take a mere stage magician seriously is ludicrous. But before you jump to that conclusion, it’s important to realize that while Houdini spent a large part of his life in search of true paranormal occurrences, he was ruthless in exposing the truth behind the fakes and charlatans. If nothing else, Holmes would have to respect that determination to root out facts above all else.

“Once you eliminate the impossible, whatever remains, no matter how improbable, must be the truth.”– Sir Arthur Conan Doyle