Dynamite Entertainment is proud to announce a special Red Sonja #1973 one-shot for release in July, celebrating the sword-wielding heroine’s many years of adventuring. Since her fearless debut in 1973, the “She-Devil with a Sword” has redefined the fantasy genre thanks to the efforts of acclaimed writers including Roy Thomas, Gail Simone, Luke Lieberman, and Eric Trautmann. Joined by first-time Sonja writer Cullen Bunn and amazing artists Dave Acosta and Rich Buckler, these titanic talents each contribute tales to this supersized, action-packed anthology. The Red Sonja #1973 special will feature the red-tressed warrior in battle with monsters, rivals, and ne’er-do-wells, stories retro-tinted to capture the flavor of her classic comics era.

Roy Thomas, the first writer to ever script the adventures and spoken words of Red Sonja, reflects on the long legacy of the character, “It’s been very gratifying to me to witness the popularity of Red Sonja over the past four decades. It was a lucky day when I read a fan-article about Robert E. Howard that mentioned a story in which one of his historical heroes fought alongside a “Russian hell-cat” or whatever precisely the phrase was (her name wasn’t mentioned in the article), so that I obtained a copy of the long out-of-print story from the estate’s literary agent, Glenn Lord, and read it: ‘The Shadow of the Vulture.’ Red Sonya of Rogatine clearly had possibilities as a sometime companion/opponent for Conan in Marvel’s Conan the Barbarian comic, so I changed her name to the (to me) slightly more exotic Red Sonja, thereby making her a somewhat new character and adapted ‘Shadow’ as an issue of Conan.  From that time on, she had a life of her own. Barry Windsor-Smith was inspired to do great things with her in the two Conan issues we did together in which she co-starred. Esteban Maroto, over in Spain, couldn’t resist giving her a different look, which came to be called ‘the iron bikini’ after I decided that should be what she wore from then on. John Buscema and Howard Chaykin did a handful of nice stories with her. Frank Thorne came aboard to virtually make her his own. And that was just in the 1970s! I suspect Red Sonja will be around for a long, long time!”

The She-Devil with a Sword known as Red Sonja is fantasy fiction’s most prominent female character, formerly a swashbuckling ally of the Robert E. Howard character, Conan. Her early adventures in the Marvel Feature comic book series led to a successful ongoing Red Sonja solo series, a celebrated run of comics from 1976 through 1979. Dynamite Entertainment acquired the Red Sonja license in 2005 as their second-ever published title, arriving on newsstands to critical acclaim and a very receptive audience. Dynamite has since published over one hundred Red Sonja comic books, including crossovers with popular characters including Conan, Dejah Thoris (of Warlord of Mars), Vampirella, Spider-Man, and more.

Red Sonja #1973 will be solicited in Diamond Comic Distributors’ May Previews catalog, the premiere source of merchandise for the comic book specialty market, for release in July. Comic book fans are encouraged to reserve copies of Red Sonja #1973 with their local comic book retailers. Red Sonja #1973 will also be available for individual customer purchase through digital platforms courtesy of Comixology, Dynamite Digital, iVerse, and Dark Horse Digital. 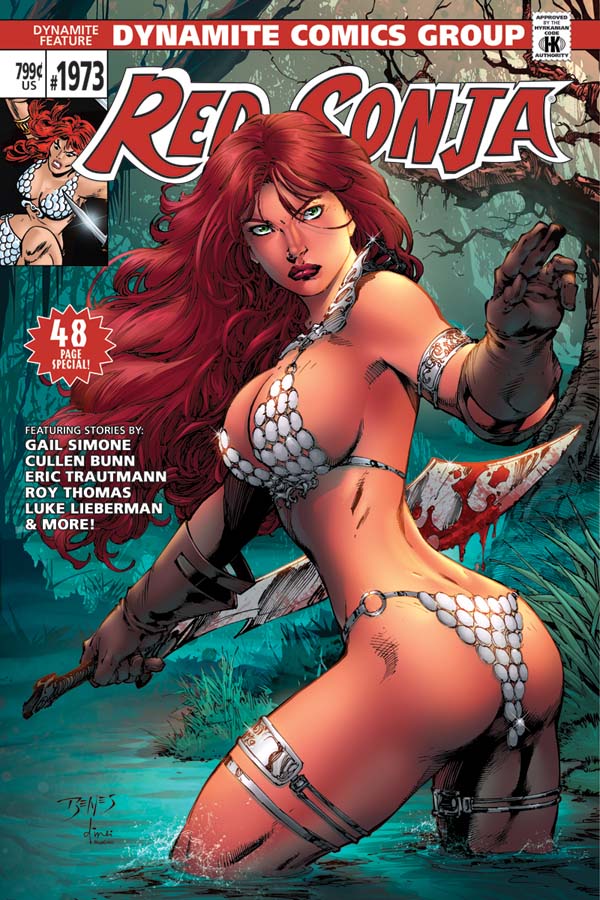