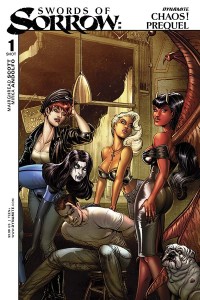 Swords of Sorrow- Chaos Special
Cover: Joyce Chin
Writer: Mairghread Scott
Art: Mirka Andolfo
Genre: Fantasy, Horror
A team-up set up by SWORDS OF SORROW’s Gail Simone, featuring the writer that she hand-picked: Mairghread Scott! Who are the villains behind the epic SWORDS OF SORROW event? Discover the darkest minds in Dynamite’s roster, the kind of ladies who are fond of how bloodstains look on six-inch heels. To quote writer Mairghread Scott, “SWORDS OF SORROW is going to be a hell of a party, and CHAOS is your blood-soaked invitation. Take a ride with some of the deadliest women in the Dynamite universe as they prove the only thing you have to fear… is them!

Swords of Sorrow looks like it’s going to be Dynamite’s crossover event, and it looks like it’s going to be a good time. Dynamite has gathered together a group of heroines the likes of which has never been seen. We’re not just talking about bringing together a few names that might get together for an issue here and there… we’re talking about characters from different times and worlds, who would never conceivably cross paths. Characters like Red Sonja, Dejah Thoris (Warlord of Mars), Vampirella, and Mulan Kato (from Kevin Smith’s Green Hornet series) are just a few.

But this story isn’t about them. If every hero needs a villain, then nothing but the very best would do here, would it?

A mysterious traveler is on a mission. He is looking to perform a rite that will give him the power to bend all of reality to his will. He knows that he’s going to be opposed, because seriously, who wouldn’t be opposed for something like that? With that in mind, he gathers together his own “Petticoat Army” to guard him and prevent any interruptions. His choices? Purgatori, half vampire and half demon. Chastity, vampiric killer of monsters. Bad Kitty, frenzy incarnate. Hel, mistress of the Underworld.

Each femme fatale is promised that whoever does the best job in the coming war will be granted one wish. Anything at all. For Purgatori it’s godhood. For Chastity, the lives of her murdered family. The multiple personalitied Chastity wants her more passive side crushed and never heard from again. And to trump them all, Mistress Hel wants nothing less than the the complete destruction of the world and everyone, everything, on it. How’s that for motivation?