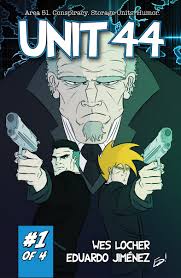 Inept Area 51 employees Agent Gibson and Agent Hatch forget to pay the rent on the facility’s off-site storage unit and the secret contents are sold to a pair of backwoods rednecks at public auction. When an alien invasion threatens planet Earth, the agents must recover an item from the locker if they hope to stop the extraterrestrial threat.

Imagine that you’re an agent working for a top secret… no, make that a top-double-super-secret government agency, and you wear a black suit. Your mission: Guard a government facility where reality-bending research is conducted, and keep safe all of the secrets hidden away in the mythical Area 51. Does this sound at all familiar yet? Good, now imagine that you’re nowhere near as cool as those other guys, and that your bosses decided that it would be a good idea to store some of their alien stuff in an off-grounds storage unit to save space, and leave you in charge of paying the rent every month.

Enter the world of Agents Gibson and Hatch. When the mismatched duo are tasked with retrieving an item from said storage, they discover that the unit has been auctioned off to a pair of fortune seeking rednecks. Seems that going delinquent on the rent for eight months is a problem regardless of what government agency you work for.

The first issue of a four issue series brings us into an improbable world of secrets, intrigue, and storage unit auctions. The artwork has a lot of manga elements and influences, and the writing is laid out with tongue firmly lodged cheek. The emphasis is on the classic oddball “buddy cop” relationship between Gibson and Hatch, and it works well. For us, at least… Personally, I think their boss is nuts for sending them after the missing artifacts, but that wouldn’t make for nearly as funny a book.