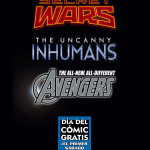 “I’m thrilled to offer these Free Comic Book Day stories in Spanish the same day as their English language counterparts,” says Marvel Editor-in-Chief Axel Alonso. “Making the stories we create more accessible and available to a wider audience is essential to the continued growth of the comic industry.”

“Free Comic Book Day is a chance for publishers to offer gateway stories that will keep fans coming back the rest of the year and beyond,” says Marvel SVP Sales & Marketing David Gabriel. “By offering our Free Comic Book Day stories in Spanish for the first time ever, we’re committed to expanding our audience to one of the largest growing demographics.”

Working closely in conjunction with Marvel and Disney marketing departments, the Free Comic Book Day 2015 Spanish Editionrepresents the first effort in a renewed focus on expanding growth of Marvel Comics to an increasingly diverse audience.