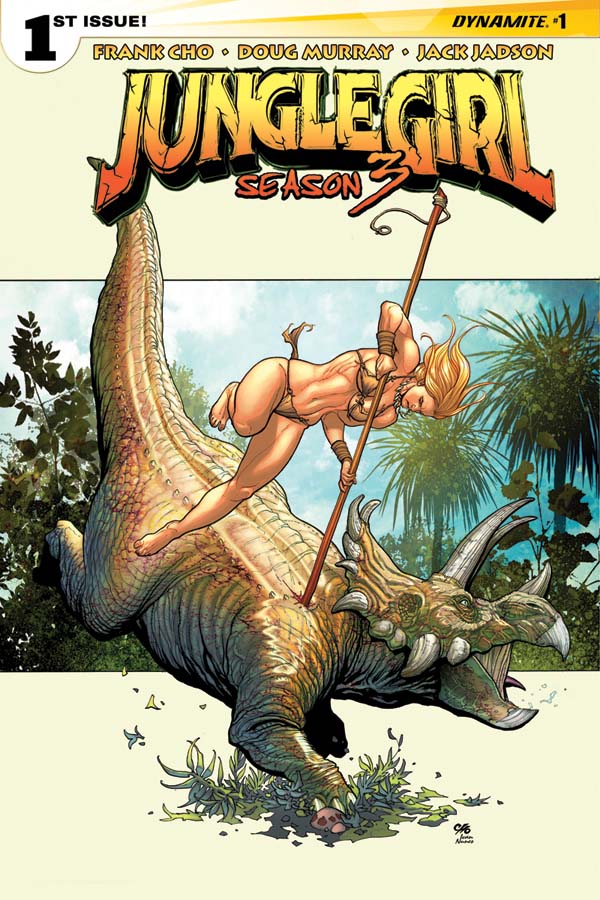 Dynamite Entertainment is proud to announce that industry sensation Frank Cho will return to Jungle Girl, the comic book series that showcases Jana, a primal heroine in a prehistoric Lost World. Co-written by Doug Murray (The ‘Nam) and illustrated by Jack Jadson (The Savage Hawkman), Jungle Girl: Season Three will debut with a new #1 issue in April 2015, featuring an explosive cover by Frank Cho.

Jungle Girl: Season Three picks up where the previous series left off, following Jana’s escape from an underwater city and a gigantic, otherworldly creature. However, her father soon reveals that those actions have doomed the Lost World in which they all live, as a wormhole appears in the sky and flaming debris begins to fall through. As the jungle burns, Jana and her friends must contend with stampeding behemoths and displaced, murderous natives. Furthermore, the rift presents a new, fearsome threat, for the fire from an alien dimension was not the only thing to come through.

“I’m delighted to be back with my co-creator, Doug Murray, and finish out the final story arc of Jungle Girl,” says Frank Cho, one of today’s most recognizable names in comic book illustration. Cho began his career with a cartoon strip called University2, published in the Diamondback student newspaper at the University of Maryland, College Park. The series evolved into the nationally syndicated comic strip Liberty Meadows, later published and expanded in monthly comic books. Cho became the go-to artist for high-profile comic book projects, including Mighty Avengers, X-Men: Schism, Savage Wolverine, and many more. Over the years, he has garnered numerous awards including an Emmy Award for the Frank Cho’s World documentary, the National Cartoonists Society’s Awards for Best Comic Book and Book Illustration, the Eagle Award, the Charles M. Schulz Award for Excellence in Cartooning.

Doug Murray, an industry staple who previously collaborated with Cho on Jungle Girl and Savage Red Sonja, says, “Season Three is when all hell breaks loose. Up to now, Jana has been a sort of wild card, going where she chooses, interacting with whomever she wants. Now, due to her actions in Season Two, everything is hitting the fan. The huge creature inside the ‘God Mountain’ has called out to its fellows — and they’re coming to get it out! Jana, her father, and her friends can’t allow that to happen. If it does, the entire world — not just their portion of it — will be destroyed. They have to find a way to fight back, which is not easy when your opponent is as big as a house and has a flying saucer! Jana has to grow up. She has to work with her dad to find a way to save the world, no matter what it costs her… or her friends.”

Jack Jadson, whose artwork graced the Dynamite series Red Sonja: Unchained and Vampirella: Feary Tales, says, “I did Jungle Girl three years ago, and was thrilled when my agent told me I would draw her again after all these years. I really dig doing Jana, she´s so sexy. And, of course, who wouldn’t love drawing more dinosaurs?”

Regarding the appeal of the series premise, Murray says, “Jungle Girl appeals to readers for the same reason that other such stories do. We are fascinated by the ‘Noble Savage’, the man or woman who, untainted by society, lives a life filled with the challenge (and pleasure) of the hunt as he/she fights for survival.  It’s a genre that has existed for over a century but was perfected by Edgar Rice Burroughs in Tarzan and associated books. The TV series Lost touched upon the same challenges and appeals.”

“Jana is someone who sees the world through simpler eyes,” says Murray, examining the appeal of the character specifically. “To her, the great creatures that inhabit the jungle are not ‘Dinosaurs’ or ‘Mammoths’ or anything else; they are merely food, the things she and the people of her tribe need to survive. She has no prejudices at all. The men of her tribe are friends, those of an enemy tribe are not. It doesn’t matter what color they are or what religion they have, they are who they are, based upon her one-on-one relationship with them. And, if all that is too esoteric, the other appeal is the fact that Jana is a beautiful woman in very scanty clothing who fights with dinosaurs. What more could a young reader want in a comic book character?”

Nick Barrucci, CEO and Publisher of Dynamite Entertainment, says, “Frank and Doug have created an incredible tapestry, and I can’t begin to express just how happy we are that they were able to coordinate their schedule and come back to tell the grand finale to their story. We’re thrilled (and immensely gracious) that Frank Cho, whose tremendous talent makes him one of comics’ most highly sought-after creators, is returning to Jungle Girl for its senses-shattering Third Act. Working hand-in-hand with Doug Murray, himself an exceptional writing talent, Cho will guide Jane the Jungle Girl to new heights!”
Jungle Girl: Season Three #1 will be solicited in Diamond Comic Distributors’ February 2015 Previews catalog, the premiere source of merchandise for the comic book specialty market, and slated for release in April.  Comic book fans are encouraged to reserve copies of Jungle Girl: Season Three #1 with their local comic book retailers. Jungle Girl: Season Three will also be available for individual customer purchase through digital platforms courtesy of Comixology, Dynamite Digital, iVerse, and Dark Horse Digital.
Please follow and like us: