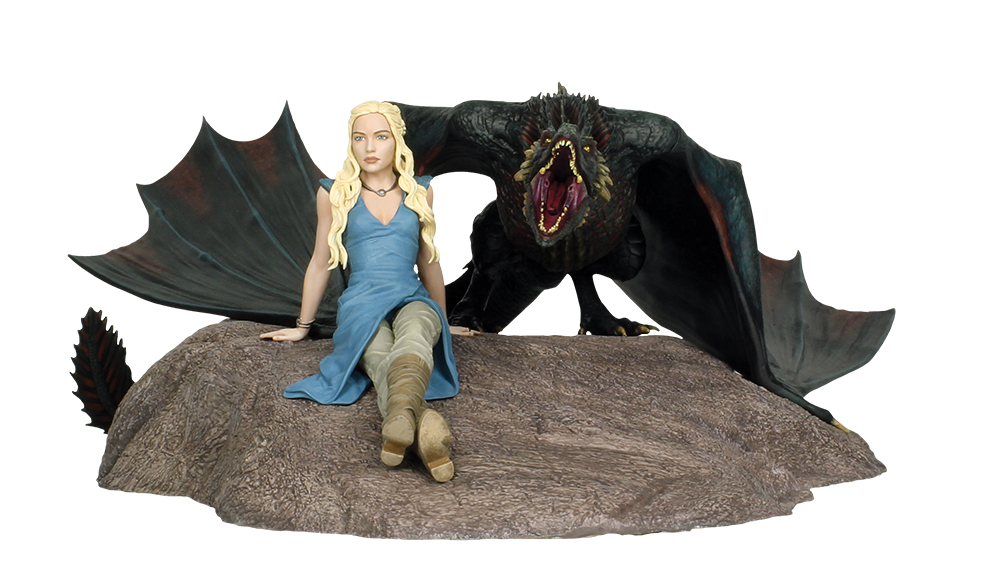 Dark Horse is kicking things off for Toy Fair with the reveal of the latest release in its growing line of figures based on characters from the smash-hit HBO series Game of Thrones®!

Daenerys Targaryen, the last noble of her house, is on a path to reclaim her destiny in Game of Thrones. She has emerged as one of the series’ best-loved characters.Dark Horse Deluxe has focused on an iconic moment of Daenerys and her dragon, Drogon, to create an elaborately detailed pre-painted limited-edition statue measuring 14” across and 18” from front to back.

“Our previous large-scale Game of Thrones statues sold out shortly after release, ” said Dark Horse product development head David Scroggy. “We saw pieces like our 14” Iron Throne replica, and the Jon Snow & Ghost statue going out-of-print quickly, becoming hard to find at any price. We expect the Daenerys & Drogon statue to be just as popular and we’re very excited to unveil it at Toy Fair.”

The prototype will be revealed at the Dark Horse booth #4837 at Toy Fair 2015, held February 14-17 at Jacob Javits Center in New York City. The limited-edition quantity is still to be determined as of press time.