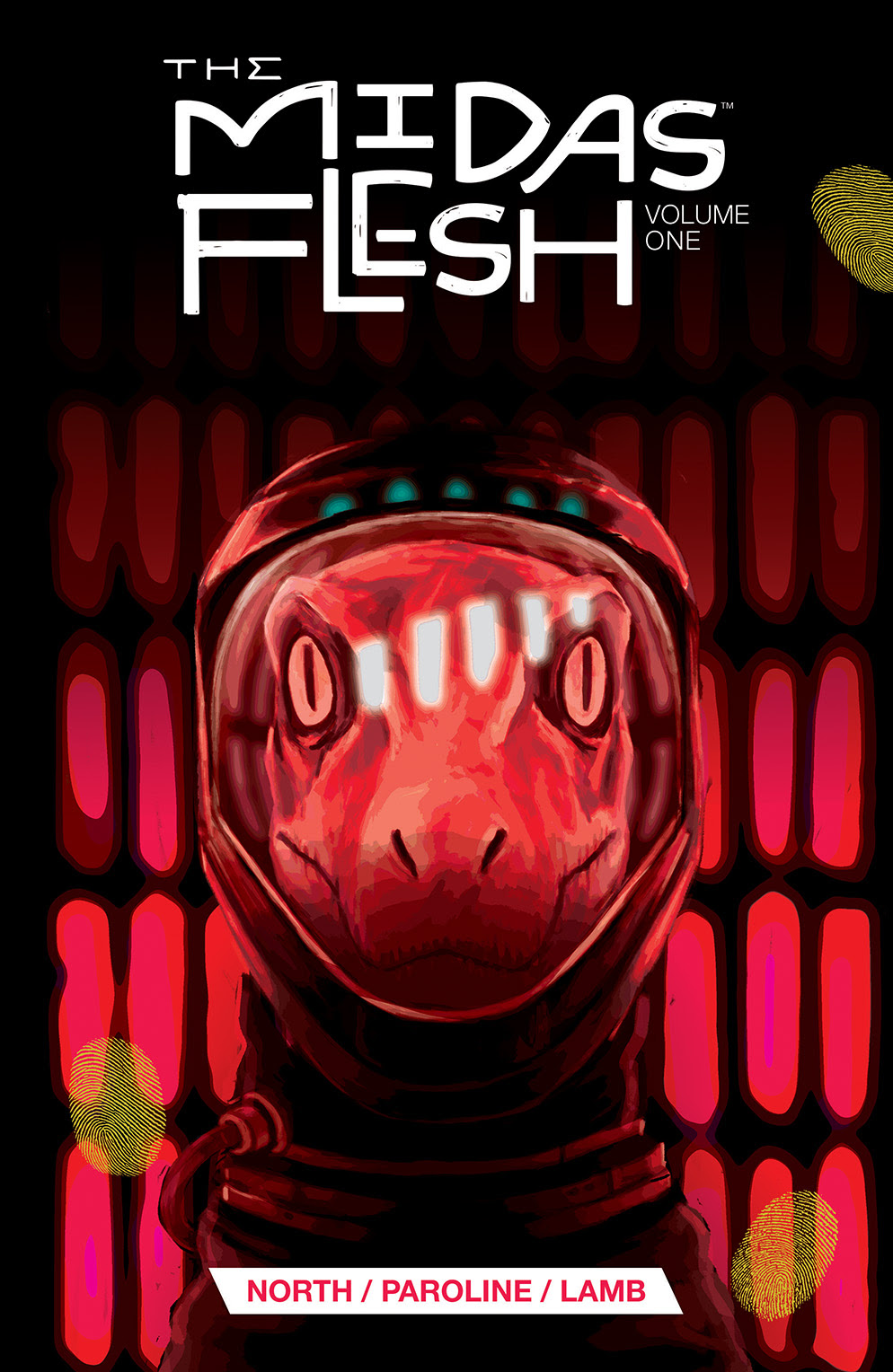 Nearly one year ago, award-winning publisher BOOM! Studios announced their newest imprint BOOM! Box, a home for comics “made for the love of it.” The publisher is now pleased to announce the collected first volume of the imprint’s inaugural series, The Midas Flesh. Created by the longtime creative theam behind the Adventure Time comics, writer Ryan North (Dinosaur Comics) and artists Shelli Paroline and Braden Lamb, The Midas Fleshis an edge-of-your-seat, save-the-universe adventure with two butt-kickin’ ladies and a dinosaur in a spacesuit. The first volume collects issues #1-4 of this quirky space epic and features a casewrap covered in striking gold fingerprints.

“When you create an imprint that’s intended to encourage weird, experimental, and eclectic comics, you have to start off with a series that really embodies that mission,” said BOOM! Studios Editor-in-Chief Matt Gagnon. “The Midas Flesh is just that for BOOM! Box. Ryan, Shelli, and Braden have already proven themselves to be some of the best storytellers in comics with their run on Adventure Time, and they’ve outdone themselves with The Midas Flesh. Plus: dinosaur on a spaceship. Hard to beat that.”

About The Midas Flesh:We’ve all heard of the Midas Touch. You know, the Greek myth about the man who did a number on himself by wishing for everything he touched to turn to gold? Well, you haven’t heard everything. Joey and her space crew have decided to return to Earth—a planet completely sectioned off, abandoned, and covered in gold—to find out exactly what happened to this once thriving planet and see if they can use that knowledge against the evil empire that’s tracking them down. As luck would have it, they just landed the most powerful weapon in the universe: some ancient dead guy’s body.

The Midas Flesh Vol. 1 trade paperback arrives in comic shops on December 3rd with a cover price of $14.99 under Diamond order code OCT141163. The cover is illustrated by Emily Partridge (Adventure Time). The Final Order Cutoff deadline for retailers is November 10th. Not sure where to find your nearest comic retailer? Use comicshoplocator.com or findacomicshop.com to find one! It’s also available for order directly from boom-studios.com.