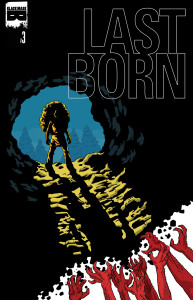 Last Born #3 (Black Mask – Meaney / Zawadzki)
What if the Big Bang was not the first of its kind? And, more importantly, not the last?

Her whole life, Julia has yearned for adventure… when she falls through a rupture in spacetime, she finally gets her wish.

Writer Patrick Meaney has spent years documenting the greatest comic writers, starting with his book OUR SENTENCE IS UP analyzing THE INVISIBLES and continuing with his documentary films GRANT MORRISON: TALKING WITH GODS, WARREN ELLIS: CAPTURED GHOSTS, CHRIS CLAREMONT’S X-MEN, THE IMAGE REVOLUTION, and his upcoming NEIL GAIMAN film.

All the insight he’s gleaned from interviews with hundreds of comics’ creators and scholars are channeled into his own debut book, a speculative science adventure about the nature of chaos in the universe and a ragtag group of civilians rising up to protect humanity.

Newcomer Eric Zawadzki’s expressive yet iconic style grounds Patrick’s sci-fi ideas in the striking characters who carry us through this cosmological thrill-ride.
————–
Here’s kind of a quirky, trippy title… If I had to sum up what kind of story “Last Born” is, I’d say it’s equal parts Alice in Wonderland / Doctor Who / 12 Monkeys rolled into a ball and thrown into a room full of mousetraps. We’re following Julia, a young girl fresh out of high school, who wants to live a life less ordinary. Her father is her inspiration, with stories of a mysterious cave and unimaginable visions of a world that shouldn’t have happened. The cave left its mark on Julia’s dad, eating away at him over the years until all that’s left is an empty man whose mind lives more in the past than in the present. Everyone believes he’s just senile, but Julia believes it’s the cave and the adventures it holds.

When Julia escapes the trap that her life is quickly becoming, she finds herself running into the cave. She finds herself in a dead world, surrounded by faceless creatures trying to worm their way into your head. She’s rescued by Ford and Eden, two survivors of different worlds, trapped here at the end of time. They also meet up with James, a soldier from the last days of mankind, a man on a mission. James’s mission isn’t to save the world, because it’s just too late for that. James carries with him the genetic material needed to give birth to a new world. At every step, they’re hunted by the Viral Man, master of the faceless creatures, and the driving force behind the death of our world.

Without a doubt, there are flaws here, but overall this is a cool concept with some room to grow. There are jumps in the narrative, bouncing from one time frame to another without warning and catching the lackadaisical reader off guard, and some of the dialogue seemed a little rushed to me. These shouldn’t be reasons not to check this book out, as I think it really does have a lot of cool stuff going for it. At the very least, it should serve as a warning to anyone who wanted to live in more interesting times…